How To Start A Revolution: Non-violent resistance with Gene Sharp 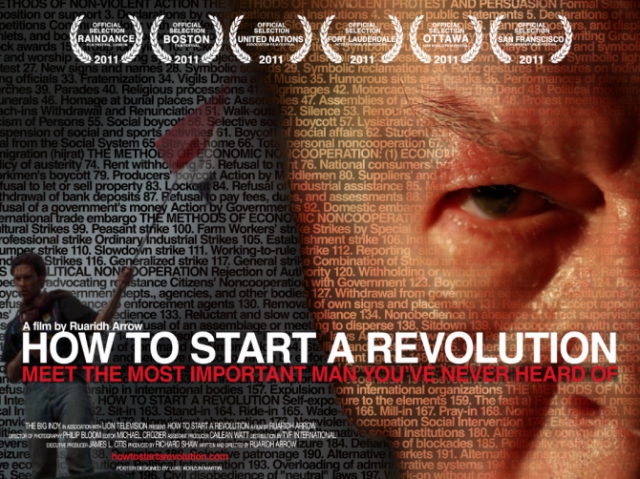 Mixing Gandhi's non-violent tactics and philosophy with a systematic strategy of civil resistance by Gene Sharp one can understand non-violent resistance can be a substitute for WAR. This just released film documents how the translation of Gene Sharp's work into many languages helped spawn the Arab Spring and now the Occupy movements in the US. Find out more about this unassuming man's work at the kick-off of a Media Watch Film Series at 303 Walnut Ave. Seven weeks of film and discussion starting April 9th-May 21st all Monday nights at 7:30. Donation requested at the door but no one turned away for lack of funds. Don't Miss this Opportunity!!
Sponsored by Walnut Avenue Women's Center (WAWC)

Check Out The Trailer: http://www.youtube.com/embed/CVqgde1We8E

Praise for the Film

"While Gandhi gave us the tactics and philosophy of nonviolence, Gene Sharp offers a systematic strategy of civil resistance. Liberation movements across the world are proving that this strategy is effective, even against tyrants. Thanks to Sharp, we can now realistically envision a world without war."
- Sharon Erickson Nepstad | Author of Nonviolent Revolutions | Professor of Sociology at the University of New Mexico

"A vital conversation starter and educational tool for a world awash with violence."
- The Huffington Post

"Will likely challenge and broaden the way people think about the continuing struggle for freedom and constitutional democracy around the world. Indeed, it is rare that a film offers so much to engage with. Unusually provocative and intellectually rigorous, How to Start a Revolution is recommended quite keenly."
- Libertas Film Magazine

"At last, a film focused solely on Gene Sharp's formidable intellectual influence on historical and contemporary conflicts. A brilliant film celebrating a brilliant man. Bravo!"
- Erica Chenoweth | University of Denver | Co-author of Why Civil Resistance Works: The Strategic Logic of Nonviolent Conflict--
END_OF_DOCUMENT_TOKEN_TO_BE_REPLACED
Added to the calendar on Mon, Apr 2, 2012 10:47AM
Add Your Comments
Latest Comments
Listed below are the latest comments about this post.
These comments are submitted anonymously by website visitors.
TITLE
AUTHOR
DATE
The Methods Of Nonviolent Action
G
Support Independent Media
We are 100% volunteer and depend on your participation to sustain our efforts!