Add an Event
Newswire
Calendar
Features
Home
Donate
From the Open-Publishing Calendar
From the Open-Publishing Newswire
Indybay Feature
Publish to Newswire
Add an Event
Related Categories: California | Central Valley | U.S. | Environment & Forest Defense | Government & Elections | Health, Housing & Public Services
Occupy, social justice groups blockade entrance to Monsanto
by Dan Bacher
Friday Mar 16th, 2012 8:27 AM
"We are calling for a 'global class-action' against Monsanto," said Steven Payan, one of the Davis protest organizers. "We are joining the world in solidarity to demand a ban on all GMO foods and hold Monsanto accountable for its actions throughout history from Agent Orange to Deforestation to current and past deaths to preying on small farmers through a broken court system and also through International Free Trade Agreements." 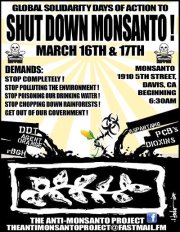 Monsanto has closed its facility in Davis after 150 occupiers from throughout the state blocked the entrances to Monsanto's Davis facility on 1910 5th Street.

The occupiers reported they have "shut down" the corporate giant, which produces genetically modified organisms (GMOs) and is notorious for its inordinate influence over the Food and Drug Administration (FDA) under the Obama administration. Police are now on the scene.

You can see the protest live at sacmedia.tv.

The protest is part of a "Global Days of Action to Shut Down Monsanto" in dozens of U.S. cities and several countries. Occupy groups from Sacramento, Davis, Woodland and even Los Angeles are expected to participate, as well as labor, environmental, veterans and social justice groups.

"We are calling for a 'global class-action' against Monsanto," said Steven Payan, one of the Davis protest organizers. "We are joining the world in solidarity to demand a ban on all GMO foods and hold Monsanto accountable for its actions throughout history from Agent Orange to Deforestation to current and past deaths to preying on small farmers through a broken court system and also through International Free Trade Agreements."

Payan said Monsanto has been linked to massive pollution, including the poisoning of drinking water, genetically modified crops and seeds, chopping down rain forests and other types of social justice and environmental destruction.

Several countries, including Brazil, India, Haiti, Peru, France and others in Europe, have enacted recent bans or restrictions on Monsanto and its GMO foods. People worldwide are demanding restitution for hundreds of thousands of deaths, birth defects, suicides and ailments linked to Monsanto. 300,000 organic farmers recently sued Monsanto, according to Payan.

Also today, Occupy Monsanto’s agents of change with the Genetic Crimes Unit (GCU), a group designed to protect America from genetically modified foods, will wear bio-hazmat suits when they visit Congress. The group will gather at Capitol South Metro station in Washington D.C. at noon to highlight how chemical company Monsanto is contaminating our political process.

The GCU opposes Monsanto’s bid to increase spraying of food with toxic weed killers like 2,4 D (the main ingredient in Agent Orange), genetic contamination of the organic food supply, and other risks associated with genetically modified food (GMOs).

The GCU will arrive at the metro station wearing bio-hazmat suits to assess whether Members of Congress and their staff have been victims of genetic crimes. The GCU will hold a banner that reads, “Congress is Genetically Modified,” as they circulate on Capitol Hill sidewalks.

This day of action is part of a larger international call to ‘Occupy Monsanto’ taking place all over the globe including Spain, Africa, New Zealand, Australia, Canada, and at least 28 cities throughout the US.

“In the name of Wall Street profits, chemical corporations such as Monsanto genetically engineer crops to withstand high doses of their toxic weed killers that contaminate our food and water, and have not been proven safe. We deserve to know what we are eating. Virtually every major country requires labeling of GMOs in foods so their citizens can make informed choices, including all of Europe, Japan and even China,” said GCU’s Ariel Vegosen.

“Monsanto’s lobbying dollars are pouring into politicians so its clear we have a GMO contaminated US Congress that threatens our health and the health of the planet,” Vegosen concluded.
Add Your Comments
LATEST COMMENTS ABOUT THIS ARTICLE
Listed below are the latest comments about this post.
These comments are submitted anonymously by website visitors.