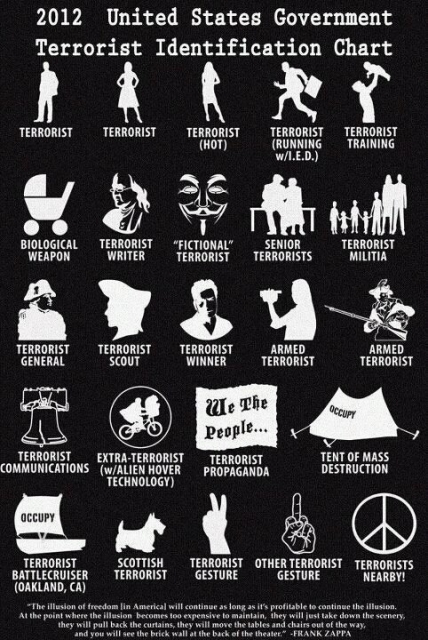 Actually they seem to have targeted the 'social butterflies'... The people who know lots of people in lots of places... Many of them have some 'aura' of 'organizer' about them, but for most, they're assumed 'roles' not 'professional activists'. #Occupy and it's spawn such as #75River are INTENDED to eschew the professional organizers in favor of 'grassroots'.

But they're still social butterflies, because it goes with that 'organizer' territory to meet-and-greet all kinds of people, and unlike the hardened longterm variety of organizers, they are much more naive.

It's the SCPD's chance to see whether that database the NSA supplied them after years of painstaking research in conjunction with Tweeter, FarceBook, SpySpace etc would work in reality (on the ground) as well as in the 'virtual reality' (online social networks) the algorithms and artificial intel were designed for.

Just call it 'proactive policing' or some witty buzzword thing like that, and the feds (the DHS fer sure) will bury you in bucks.

Just sayin'... Half kidding. But not kidding about the type of person they netted(sic) 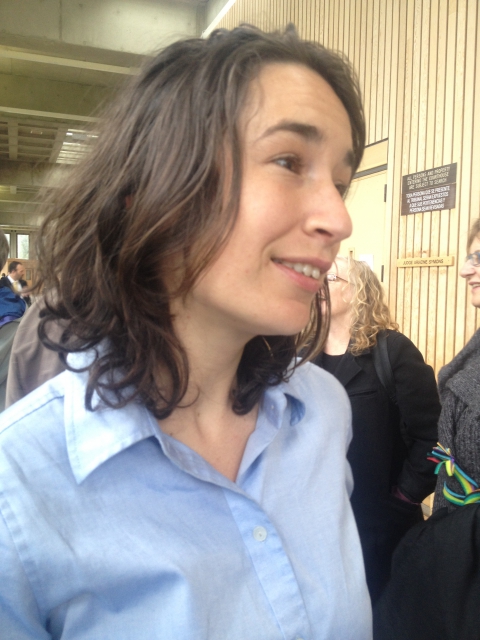 original image (2448x3264)
Gabriella Ripley-Phipps, one of the defendants, attends one of the many hearings for the Santa Cruz 11. Photo by Becky Johnson

Santa Cruz, Ca. Attorneys Ben Rice and George Gigargian agreed. While there is no 1st amendment right to trespass, it goes to intent, that a photojournalist might be guilty of trespass in order to get the photos, but not guilty of felony conspiracy to trespass or felony conspiracy to commit vandalism. Bradley Stuart and Alex Darocy were working in that capacity on November 30th. According to DA Rebecca Young, DA Bob Lee's choice to prosecute the Santa Cruz 11, "You've got to commit vandalism to trespass." To her, they are the same.

"Defendants were committing a crime from the minute they entered the building. You demonstrated what side you're on," Young told visiting Judge Stephen Stillman.

Personally, I think they are separate charges. Those who vandalized the property (which was a couple of instances of graffiti in the elevator and an anarchist symbol on a roof air conditioning duct according to Det. Gunther), are not being charged. There was no evidence that the 11 people charged had ANYTHING to do with the vandalism, such as it was, that happened during the three-day occupation, nor was any presented. To the contrary, evidence was presented of active efforts by the Occupiers to prevent vandalism, with a sign of consensed agreements by participants overtly against any vandalism introduced into evidence.

Officer Winston told of one instance of a man exiting the building with a box of lightbulbs and putting that box in his car. Another man, one of the defendants followed him out and pleaded with him to "not do this." The man ignored the defendant, and sped away. Young turned what was evidence of an enforced policy to not steal or vandalize the property into proof that "vandalism was inevitable and, indeed, we did see that it did happen."

Gigargian asked "If an embedded journalist photographs soldiers engaged in atrocities or illegal acts, is he then to be charged with felonies for conspiring to commit those acts?"

So, for a couple of lines of graffiti inside and on top of a long vacant bank building, 11 people, including the journalists who covered the event, continue to face felony charges, potentially the loss of voting rights, the right to hold public office, the right to collect Food Stamps, the right to federal benefits, and the loss of professional licenses. The bank building looks even more forelorn now...surrounded by off-kilter chain-link fencing. And with a "for lease" price of $28,790.00/month to rent it, will likely be a blighted hulk long into the future.

But that's the way Wells Fargo wants it. And 75 River Street has lots of company. The property next door, owned by CoAmerica, just posted a "for lease" sign. Another empty bank is fenced off behind the Town Clock. The corner of Ocean Street and Water Street, a former Bank of America building stands empty "for lease." On the opposite corner is Chase Bank. Next to it, ANOTHER fenced off former bank building.

What's next? Onto Dept 6 (Judge Paul Burdick) on April 29th for the next hearing for Bradley Stuart and Alex Darocy.

A twitter feed for the Santa Cruz 11 has been set up at supportSC11. Check there for updates.

http://www.beckyjohnsononewomantalking.blo...
Add a Comment
§Lawyer, retired
by Jesús B.Ochoa
(viejolex [at] alumni.nd.edu) Friday Jul 6th, 2012 6:12 PM
Turn that damn judge in to the California judicial commission, or whatever the body which oversees judicial conduct is called. Move to have her recused.
http://boboland-cronicas.us
Add a Comment
Support Independent Media
We are 100% volunteer and depend on your participation to sustain our efforts!