On the Eve of International Women’s Day…… 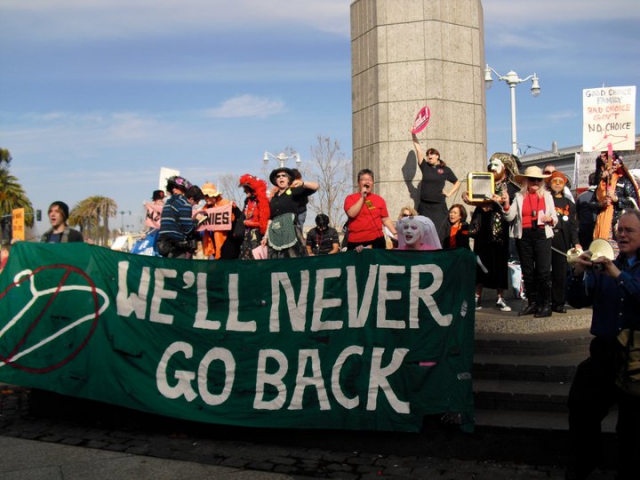 • Abortion on demand and without apology!
• Women are not objects. Women are not things to be used for the sexual pleasure of men NOR are they breeders of children!
• Women are human beings, fully equal in every realm!
• Fight for the emancipation of women all over the world

A war on women is raging across this country, a hateful and violent assault against women’s most fundamental rights and humanity. What does it mean to be a woman in America today? Every 15 seconds a woman is beaten. Every day 3 to 4 women are killed by their partners. Women are degraded, dehumanized, and destroyed within a culture steeped in rape and sexual violence. One out of 4 female college students will be raped or sexually assaulted while in college. One in 5 female soldiers is sexually assaulted while in the military.

The right to abortion is one huge battlefront in this war on women. A woman who cannot control her own reproduction, and choose whether and when to have a child, is not free. An avalanche of new state laws is not just criminalizing abortion, but attacking contraception too. Religious fanatics and rightwing lunatics are on this mission – but the Democrats are right there with them too. And between the Church and the State, the willful silencing of women’s voices about their own health care, their own needs, and their own lives is profound and intolerable.
Why protest at St. Mary’s Cathedral? Because the Vatican’s approach toward women, gender, sexuality and science is a horror. The Pope has condemned condoms, causing millions of HIV-AIDS deaths. The Vatican condemns homosexuality as a “sin” which directly contributes to anti-LGBT bigotry, hatred, and violence. It insists that divorce, too, is a “sin,” contributing to women staying in abusive marriages. The Catholic Church’s denial of abortion as a basic right amounts to female enslavement.

And now the Bishops urge “non-compliance” with new regulations requiring health insurance to cover birth control. Behind the Bishops’ hypocritical cries of “religious freedom” – they are out to enforce their canon law (with all its bigotry against women and LGBT people) on all of society. And the Obama administration says we must be sensitive to THIS as religious freedom?

We denounce the Vatican, not the parishioners – 98% of whom have used birth control [Guttmacher Institute, April 2011]. And many of us think the Catholic Church is only one of many religious institutions whose terrible tenets and practices harm and destroy the lives of women and LGBT people. But in the U.S.A. right now, the right-wing Catholic movement led by the Council of Catholic Bishops is fighting with all its might as a big power in the larger “war on women.”

We say the Church should give up oppressing, harassing, and destroying the lives of women – not just for Lent but forever!

When half of humanity is enslaved and degraded, no one is free. We demand – and on International Women’s Day 2012, we celebrate – the full equality and liberation of women.

Sponsored by World Can’t Wait, BACORR (Bay Area Coalition for Our Reproductive Rights), CODEPINK-SF, San Francisco NOW, and Revolution Books
END_OF_DOCUMENT_TOKEN_TO_BE_REPLACED
Added to the calendar on Sat, Mar 3, 2012 1:32PM
Add Your Comments
Support Independent Media
We are 100% volunteer and depend on your participation to sustain our efforts!