Add an Event
Newswire
Calendar
Features
Home
Donate
From the Open-Publishing Calendar
From the Open-Publishing Newswire
Indybay Feature
Publish to Newswire
Add an Event
Related Categories: U.S. | Police State & Prisons
Occupy the Justice Dept. for Mumia Abu-Jamal and All Political Prisoners on April 24
by Prison Radio
Thursday Mar 1st, 2012 4:38 PM
Mumia Abu-Jamal is back with his unstoppable commitment to writing and recording his commentaries with Prison Radio. New photos of Mumia – the first taken since 1996 – show that the injustice leveled against him has not diminished his love, courage, and strength. The next big action will be Occupy the Justice Department in Washington, D.C. on April 24, Mumia’s birthday. Free Mumia and ALL political prisoners!
Listen now:
Copy the code below to embed this audio into a web page:
Download Audio (2.3MB) | Embed Audio

Mumia Abu-Jamal is back with his unstoppable commitment to writing and recording his commentaries with Prison Radio. He has been calling regularly since being moved into general population at SCI Mahanoy and is able to call more often. His insightful, moving, timely essays will continue to be broadcast around the world to inform and to inspire. This week in Paris, "The Vision of Fanon" was played when he recevied the Fanon Award, and at Temple University in Philadelphia, "Dubois Country" was played at a conference on W.E.B. Dubois.

New photos of Mumia - the first taken since 1996 - show that the injustice leveled against him has not diminished his love, courage, and strength. You can see them HERE.

Click HERE for the legal update and blow by blow of our first step toward freedom in 2012: the fight to get Mumia out of the hole.

To keep up to date with breaking news about Solitary and PA Prison Conditions visit www.hrcoalition.org and the investigative news service www.solitarywatch.com. Also, please consider signing this important petition to release Russell Maroon Shoats from 21+yrs in Solitary HERE.

(ABOVE: The Free Mumia banner, which hangs in the Prison Radio office, was created by Penny Schoner.)

Mumia recorded "Souls on Ice" which was played at the Occupy4Prisoners rally at San Quentin, part of a nationwide day of action for prisoners called by Occupy Oakland at the urging of Angela Davis, Elaine Brown, and Barbara Becnel. Over a dozen communities across the country participated in prisoner solidarity demonstrations, including Austin, Baltimore, Boston, Chicago, Columbus, Denver, Durham, New York, Philadelphia, Los Angeles, Fresno, Portland, and Washington D.C.

Message to the Movement 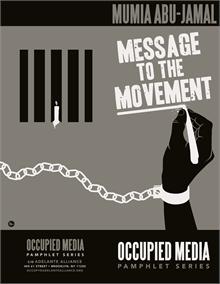 The Occupied Media Pamphlet Series is a special project launched with Adelante Alliance to participate in the movement through the printed word. To get a copy go to our website store HERE.

Save the Date: April 24th Occupy the Justice Department

The next big action will be Occupy the Justice Department in Washington, D.C. on April 24, Mumia’s birthday. Free Mumia and ALL political prisoners!

On Wednesday evening, twenty-five prisoners at Ohio State Penitentiary (OSP) ate their first meal since Sunday night. The hunger strike was inspired by the Occupy4Prisoners National Day of Action called by Occupy Oakland. Siddique Abdullah Hasan (pictured above), one of the hunger strikers, called Prison Radio and recorded a statement, saying they initially intended a one day fast as a “symbolic gesture, a way of locking arms with the people on the outside.”

By Monday evening the prisoners had decided to issue demands and continue refusing food. Their demands included specific changes in the conditions of their confinement at Ohio’s super-max prison as well as calls for broader reforms. They resumed eating after Warden David Bobby agreed to grant a number of their demands, including:

1. Reversing the recent decision to reduce outdoor recreation time for prisoners to a schedule alternating between 3 and 4 hours per week;

3. Bringing the head dietitian from Central Office in Columbus to review OSP food policies and hear prisoner complaints about inedible and scorched food;

4. A number of specific instances of price-gouging, skimping and lack of variety in the commissary.

Hasan said “Warden Bobby has been a man of his word in the past, so we don’t anticipate the kind of situation going on in California” referring to slow response to negotiations during last year's large prisoner hunger strikes in California.

The prisoners consider their hunger strike a victory because they won these specific demands and also because they helped raise awareness of state and even nation-wide issues regarding the artificial economy of state pay and commissary prices.

Siddique Abdullah Hasan, a Muslim Imam, has been on death row fighting what he says is a wrongful conviction following the 1993 Lucasville Uprising. More information about the Lucasville Uprising is available on a new website Hasan and other prisoners helped create, at LucasvilleAmnesty.org.

—-Prison Radio first began recording prisoners in 1990. Our mission is to challenge unjust police and prosecutorial practices which result in mass incarceration, racism, and gender discrimination by airing the voices of men and women victimized by an unjust criminal justice system. Our website www.prisonradio.org features Mumia Abu-Jamal’s essays and much more, including the latest news about his case. To receive our email newsletter, please sign up on the bottom of our website’s front page.

http://www.prisonradio.org
Add Your Comments
Support Independent Media
We are 100% volunteer and depend on your participation to sustain our efforts!