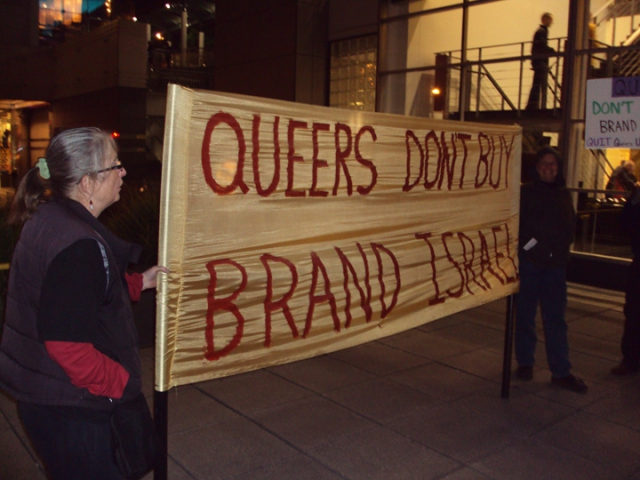 original image (720x540)
Dozens of Bay Area activists came out over the weekend to say “Don’t Buy Brand Israel,” as Batsheva Dance Company began their 2012 North American tour at Yerba Buena Cultural Center in San Francisco. For two of Batsheva’s three nights in San Francisco, members of Queers Undermining Israeli Terrorism, International Jewish Anti-Zionist Network (IJAN), Mondoweiss, Code Pink, Global Exchange and the Palestine Solidarity Network were on hand to greet dance-goers with information, banners and guitar music. When theater managers complained that the singing was too loud and threatened to call the cops, a protester responded, “The traffic on Howard Street is much louder than us, so why don’t you call the police on the cars?”

One affinity group performed a clever guerrilla theater, presenting Batsheva attendees with a brochure apparently from the State of Israel, proclaiming, “WELCOME To Our “Brand Israel” Event!” The flier went on to inform audience members that “By attending this event, you show your support of the Israeli government and its policies.” The well-dressed women greeted people with “Thanks for supporting the State of Israel,” and “Here’s a program insert from the Israeli government.” Some of those receiving the brochure were confused, others enthusiastic, and a few gave the flier back saying, “I don’t support your government.”

“Don’t pay any attention to those people and those human rights issues they are always going on about,” an Israeli “actor” told a guest who seemed about to take a flier from a QUIT! activist. The other protesters played along, arguing that their flier told the “real story.” The QUIT! flier asked those attending the show, “Which Tutu Is for You?”, counterposing Bishop Desmond Tutu’s stance opposing Israeli apartheid with the silence of the Israel Ballet Company and Bathseva in the face of international calls for solidarity with Palestinian liberation.

Protests are also planned for Batsheva’s appearances in Brooklyn, Montreal and other North American cities, and a letter calling on the company to take a strong, unequivocal stance against their government’s treatment of Palestinians was signed by 20 organizations around the United States and Canada.

“In the case of apartheid in South Africa, isolation from the global community had a major impact on its downfall, and cultural boycott played a pivotal role. Boycotting Batsheva is an important way to support the Palestinian Campaign for the Academic and Cultural Boycott of Israel,” said Mich of IJAN.

Many attendees promised to tear off the coupon in QUIT’s brochure, asking Yerba Buena to learn about and respect the boycott of Israeli cultural institutions before booking future tours. Several dancers said that they knew people involved in scheduling for the theater and would talk to them directly. Since many of the people attending had not heard about the Palestinian civil society’s call for a boycott of Israeli-sponsored cultural events, this was a very successful outreach to a receptive audience.
http://www.quitpalestine.org, http://adala...
§Brand Israel "Ambassadors"
by Bay Area Palestine Solidarity Network Wednesday Feb 29th, 2012 2:45 PM 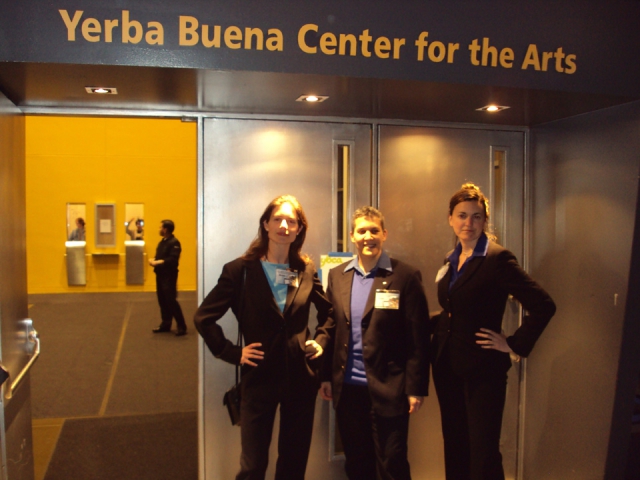 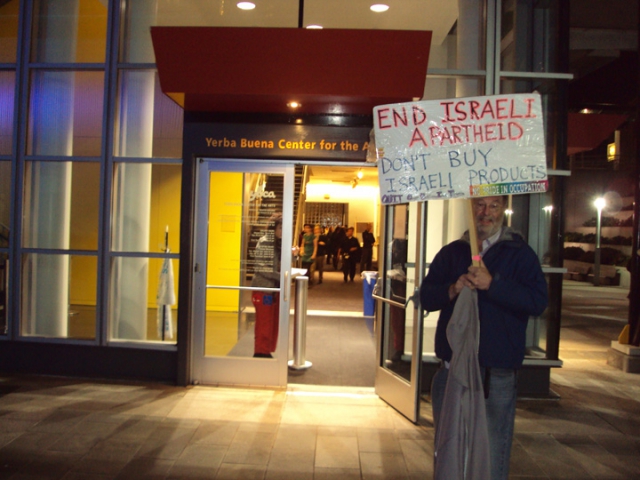 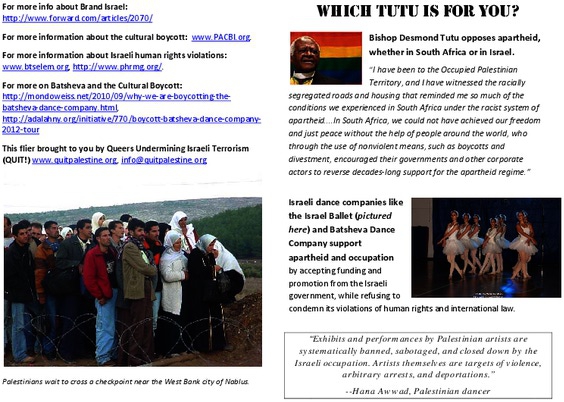 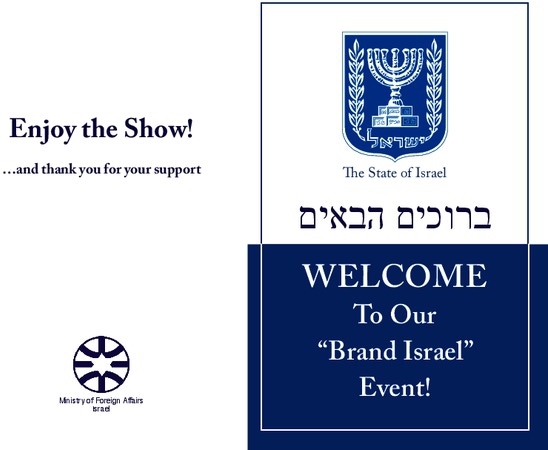 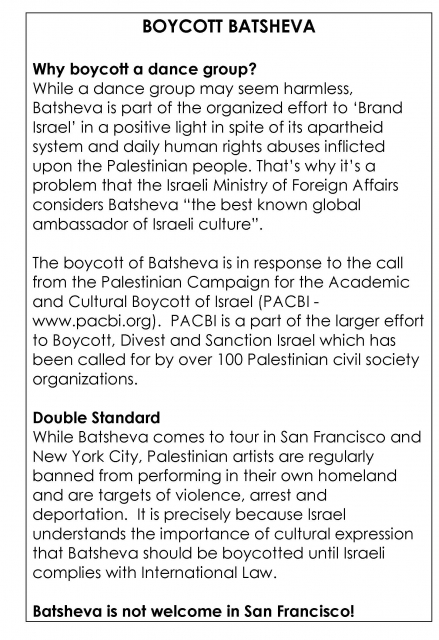 §Thanks for news; Feb 23, 2012 was date
by Anti-Zionist
Thursday Mar 1st, 2012 8:06 AM
Thank you for the news; this is the first many of us hear of this event. Looking at Mondoweiss at
http://mondoweiss.net/2012/02/ambassadors-of-apartheid-batsheva-dance-company-to-tour-san-francisco-and-new-york.html
it appears that February 23, 2012 was the date of this event. Also, the websites you refer to are 2 in one, making it impossible to read the links. We can get the QUIT website, but the other one is unknown.

The Mondoweiss link shows the contempt for women Israel has, not surprising in a highly militarized society, like the US. In Israel's case, female soldiers are promoted as pin-up girls.

All protest signs should always make it clear that Israel exists only courtesy US tax dollars. We pay for the horrors of Israel just as we pay for the rest of the horrors perpetrated by the puppets of US imperialism and right here at home in the prison-industrial complex, the fascist police state that is the USA, and always has been, and always will be until the capitalist profit motive is eliminated, which only a serious labor movement can achieve.
http://mondoweiss.net/2012/02/ambassadors-...
Add a Comment
Support Independent Media
We are 100% volunteer and depend on your participation to sustain our efforts!