Supporting the Next Generation of Palestinian Nonviolent Resisters 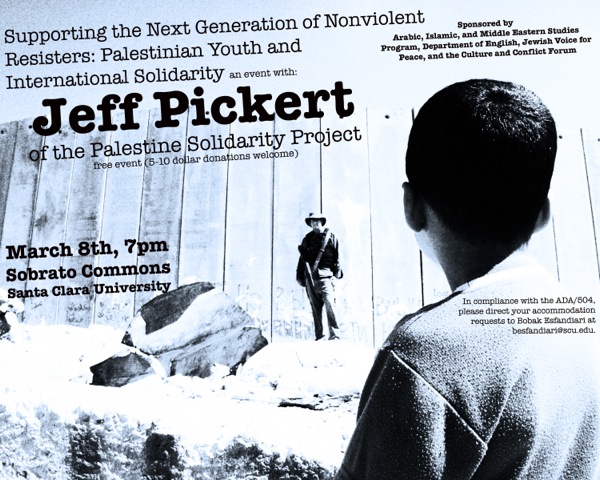 You can access a map of Santa Clara University at: http://www.scu.edu/map/ Sobrato Commoms is on the bottom part of the map.
United Middle East, together with the Culture and Conflict Forum and South Bay Jewish Voice for Peace, invites you to hear Jeff Pickert of the Palestine Solidarity Project speak on Thursday, March 8th , at 7:00 PM at Sobrato Commons of Santa Clara University.

Jeff Pickert is a 22-year-old American solidarity activist who has lived and worked in the Occupied West Bank for a collective period of over a year and a half. During this time he studied Arabic and Palestinian politics at Birzeit University and engaged in direct action efforts against the occupation.

Jeff accompanied Palestinian medical teams during military invasions in Nablus in 2007, participated in anti-wall protests at Ni’lin and Jayyous, supported Palestinian farmers at risk of violence from Israeli settlers and soldiers, and worked with Palestinian community organizers with the Palestine Solidarity Project in Beit Ommar. He also participated in the Gaza Freedom March initiative, which tried to reach Gaza via Egypt at the end of 2009. Most recently, Jeff attempted to sail to Gaza from Greece as a passenger aboard the US Audacity of Hope.

You can get more info on the Palestine Solidarity Project on their website at http://palestinesolidarityproject.org/


This event is free but donations of $5-10 are appreciated to defray costs of the speaking tour. This event is sponsored by the Arabic, Islamic and Middle Eastern Studies Program and the Department of English of Santa Clara University, Jewish Voice for Peace and the Culture and Conflict Forum. You can access a map of Santa Clara University at: http://www.scu.edu/map/ Sobrato Commoms is on the bottom part of the map.

For information on this meeting or other South Bay events, write to:
southbay [at] jewishvoiceforpeace.org

For news and analysis on Israel/Palestine and current JVP campaigns, visit: http://www.jewishvoiceforpeace.org
END_OF_DOCUMENT_TOKEN_TO_BE_REPLACED
Added to the calendar on Wed, Feb 29, 2012 10:57AM
Related Categories: Palestine | South Bay
Add Your Comments
Support Independent Media
We are 100% volunteer and depend on your participation to sustain our efforts!