by David Gurney
Some may speculate that the private billionaire sponsors of the MLPAI (shielded by the Resources Legacy Fund Foundation) knew they had a public relations nightmare on their hands when their mapping vessel killed the whale. Ron may have been their point man, to ameliorate as best he could any bad publicity.

Photo of Blue Whale in the small cove just south of the Mendocino Coast Botanical Gardens. 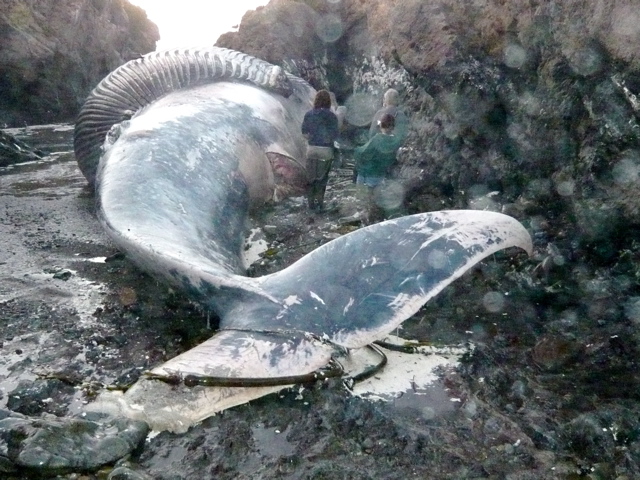 Ron LeValley showed up three days after the Oct 19, 2009 whale strike at the site where the dead whale was beached, in a very tight narrow cove about a mile south of Fort Bragg. I was also there. When questions were raised during those first few days about how the accident had occurred, it was established that the research vessel Pacific Star was using side-scan and multi-beam sonar for hydrographic surveys.

Initially there had been rumors that the vessel was doing oil/gas drilling surveys, but it was actually doing underwater mapping in preparation for the North Coast Marine Life Protection Act Initiative (MLPAI).

At the scene, Ron proclaimed himself a “whale expert” and started making very public and adamant statements – to the press and anyone who would listen – that the vessel’s hydrographic sonar had nothing to do with the whale strike. He claimed it was the same type of sonar that fishing boats use, that sonar only affects toothed whales, not baleen whales, that it was just a freak accident, and the ships powerful mapping sonar had nothing to do with it.

He even presented a public slide show on whales in the following weeks, where he expressed these beliefs.

This had many people’s heads scratching. Why would a trained biologist make statements that fly in the face of fact. To even do hydrographic surveys in California waters, you are required to have a special permit, costing $5,000 per year, that regulates sonar surveys – specifically for the protection of marine mammals, who are definitely adversely affected by sonar. As a biologist and whale expert, Mr. Valley certainly must have known this.

It was later learned that the Pacific Star did not possess a valid “Marine Geophysical Survey Permit” at the time of the accident, nor were they operating under the terms of the permit, which require a lookout at all times (a “marine mammal observer”).

When apprised of this, Mr. LeValley went on to claim at that this also didn’t matter, that the accident would have happened anyway, and because of the way blue whales surface unexpectedly, an observer probably wouldn’t have mattered. This also is contrary to the opinion of real whale experts.

Going back to a few days after the accident – The property owners’ had to figure out what to do with an extremely foul smelling carcass that would have made life unbearable. It would have been logical to attach long cables at high tide, and tow her back out to sea.

But Mr. LeValley assured the headland property owner that he could secure funding to haul the beast up the cliffs, and bury the bones until the microbes ate them clean.

This was done. A large crew of volunteers and paid workers, including a couple of heavy equipment operators, worked for almost two weeks, pulling macabre slabs of rotting flesh and bloody bones up the cliff. The bones were buried at a secret location in the woods east of Fort Bragg.

Why the cover-up? And who paid for it?

Some may speculate that the private billionaire sponsors of the MLPAI (shielded by the Resources Legacy Fund Foundation) knew they had a public relations nightmare on their hands when their mapping vessel killed the whale. Ron may have been their point man, to ameliorate as best he could any bad publicity.

Two months after the accident, Mr. LeValley was chosen as a Co-Chair for the North Coast “Science Advisory Team” for the MLPAI. Although officially chosen for his extensive and well-respected knowledge on birds, he had been
a strong advocate for the marine closures to fishing and gathering by the corrupt, privately sponsored MLPA Initiative, both before and after the whale strike incident.
Add Your Comments
Support Independent Media
We are 100% volunteer and depend on your participation to sustain our efforts!