"A coterie of American white supremacists is working to organize “nationwide” protests for February 27, 2012, as part of an effort dubbed the South Africa Project (SAP). This “project” has as its stated goal stopping the alleged “genocide of Whites” in South Africa. Participants and organizers include representatives from all five of the major white supremacist movements in the United States (neo-Nazis, racist skinheads, “traditional” white supremacists, Christian Identity adherents, and racist prison gangs). In particular, adherents of the racist and anti-Semitic religious sect Christian Identity are involved with the protests."

Taken from the South Africa Project, which rails against "Jews" and "Communism," a protest is planned in Sacramento on February 27th. View their very poorly designed flyer at: http://www.southafricaproject.info/awareness_march_ca.pdf

One of the groups sponsoring the event is Golden State Skinheads, a racist skinhead group that has organized demonstrations in the past in Central California. View their site here: http://www.goldenstateskinheads.com/aboutus.html

For links on other protests being planned in other cities, go here: http://www.southafricaproject.info/awareness_march_fliers__by_state.html

Events are organized by a wide variety of Neo-Nazi skinhead, Klan, and white nationalist groups. Stop the Nazis in their tracks!
§FEB 27th: Shut Down Nazis at the Capitol!
by Anti-Racist Action Saturday Feb 18th, 2012 11:25 PM 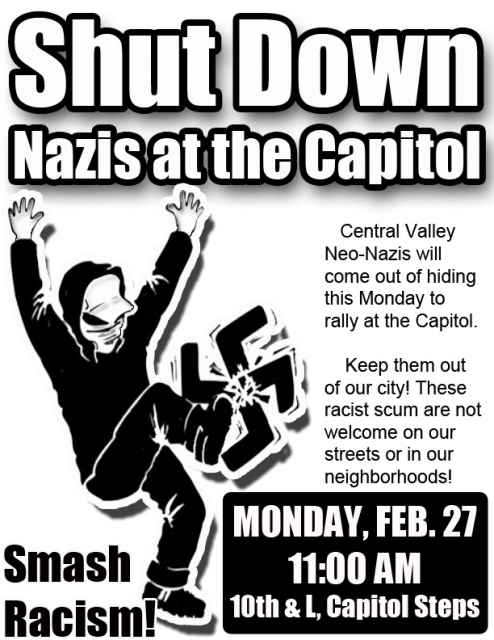 original image (612x792)
Neo-Nazis and racist skinhead groups are coming out of hiding! Shut them down in the streets!

Central Valley Neo-Nazis will come out of hiding this Monday to rally at the Capitol. Keep them out of our city! These racist scum are not welcome on our streets or in our neighborhoods!

SMASH RACISM!
Add Your Comments
LATEST COMMENTS ABOUT THIS ARTICLE
Listed below are the latest comments about this post.
These comments are submitted anonymously by website visitors.