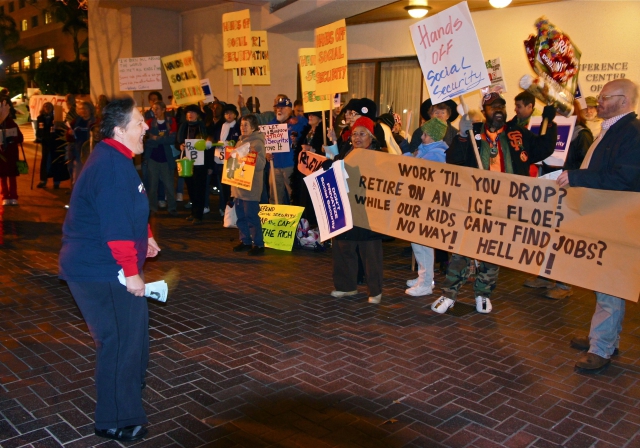 The chairs of Obama’s Deficit Commission, Alan Simpson and Erskine Bowles, are on the lecture circuit rallying the 1% to implement their programs of (1) slashing Social Security, Medicare, and Medicaid, (2) putting a cap on ALL federal revenue, to keep the safety net permanently in tatters, (3) further reducing taxes on the rich and increasing them for us, (4) taxing health insurance that have adequate benefits, and (5) cutting veterans health benefits. Read more about their plans at http://tinyurl.com/4d2erbh . Though Bowles and Simpson were unable to get Commissioner’s votes to force Congress to vote their plan up or down, they are still touring the country promoting their plan to audiences paying hundreds of dollars to see them.

Join the California Alliance for Retired Americans (CARA) and many other groups for an informational picket and press briefing to challenge these proposals. As more of us lose jobs and housing, and fall into poverty and hunger, Bowles and Simpson are using the deficit as a phony excuse to cut our services and safety net:

** Wars to control oil, tax cuts to corporations and the rich, and bank bailouts caused the deficit!

** Social Security does not add a cent to the deficit.

** Medicare and Medicaid add to the debt only because corporate healthcare refuses to let Medicare cover everyone with equal comprehensive healthcare.

Read a leaflet from a demonstration at an earlier Simpson-Bowles talk, with pointed questions directed at them: http://tinyurl.com/7obq5wj

See more pictures and a story from that demonstration
http://tinyurl.com/7gf4e9r
END_OF_DOCUMENT_TOKEN_TO_BE_REPLACED
Added to the calendar on Sat, Feb 18, 2012 3:26AM
Add Your Comments
Support Independent Media
We are 100% volunteer and depend on your participation to sustain our efforts!