Add an Event
Newswire
Calendar
Features
Home
Donate
From the Open-Publishing Calendar
From the Open-Publishing Newswire
Indybay Feature
Publish to Newswire
Add an Event
Related Categories: Santa Cruz Indymedia | Global Justice & Anti-Capitalism | Police State & Prisons
Is this how it is going to be now? re: SCPD Response to Demo at Wells Fargo
by via Occupy Santa Cruz
Friday Feb 17th, 2012 10:32 AM
by Ricardo F. Magon

Written on personal title, does not (necessarily) reflect the position of Occupy Santa Cruz

On Wednesday Feb. 15th, about 40-50 Santa Cruz occupiers protested at the 74 River Street Wells Fargo branch. I arrived around 4pm and we were just typically Santa Cruz: holding up signs on the sidewalk, the occasional chant, and waving at passing cars, never got on Wells Fargo property, all very civilized and calm, exercising our 1st Amendment rights. 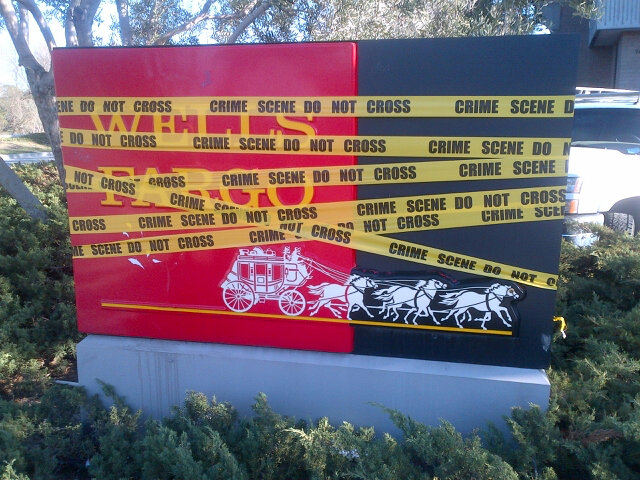 This was not a militant crowd. It could have been easily mistaken for regular SC peace activists, but perhaps for the location, and having a live-streamer. The bank apparently closed its doors for a while, but at no point did the Occupiers interfere with business, or even prevented anyone getting into the parking lot or using the ATMs. Nor did we block the sidewalk. I am going to guess that the most subversive act was to wrap the WF logo with crime scene tape, which was soon removed by a WF security guard.

Suddenly, two SCPD officers came and chatted with the WF security guard. They then approached us, and rather than have a chat or something, just grabbed an occupier and walked him across the road, followed by a number of us observing. Immediately 5 squad cars appeared and a total of 14-15 SCPD officers.

After a search the occupier was let go, but then they took another, cuffed him and sat him down on the curb, and again after a while let him go. I am hearing others also got questioned. One officer took pictures of occupiers, and there was filming from inside the bank as well. The overreaction from SCPD seemed just completely disproportionate to what was actually happening, and in a different place and with a different crowd could easily have provoked a response.

Look, I am not new to protest. I have been to marches where a certain police presence could be expected. I’ve been to protests in Europe where the boundary of what is still considered non-violent protest lies a bit differently. And during anti-war protests in the Bay a decade ago, you knew that participation in non-violent civil disobedience and direct action could, or even would lead to a police response.

But did I expect in any way the police even to show up yesterday? Not at all. A couple people standing on a sidewalk holding up a sign, that’s all it was. I can imagine two officers walk up and check the mood, no problem, or asking about intentions, and once informed that this was a completely peaceful action, could have walked off, or continued chatting with the security guards.

Instead, they chose to harass, intimidate and provoke, and put on a show of force. The effect was chilling, exactly because it was so completely out of proportion to the situation. I don’t want to make it bigger than it is, nobody got arrested that I know of, but SCPD still showed up with 5 cars, a motorcycle, and 15 officers. I cannot but come to the conclusion that this was a deliberate act to provoke the occupiers into a reaction, or at the very least try to intimidate people to not come out, or be prepared to be photographed, questioned, potentially searched, etc.

So, is this how it is going to be now? I thought this was supposed to be a progressive liberal town? If this is what happens when 40 people stand on a sidewalk with a sign, what is next when there is a bigger protest? In Oakland they had a progressive mayor authorizing OPD to shoot non-lethals at their citizens. Should we expect the same?

I respectfully request the City and SCPD to reconsider their approach to lawful protest.
http://occupysantacruz.org/2012/02/16/is-t...
Add Your Comments

§132sh35sgh5
by cybanon
Friday Feb 17th, 2012 12:23 PM
thank the spirit for this article! exactly the kind of pre-emptive counter-response against the corporate media that the universe needs ;D
Add a Comment
§SCPD lacks professionalism
by John Colby
Saturday Feb 18th, 2012 1:32 AM
SCPD Deputy Chief Steve Clark's disdainful performance at the protest reveals how much the SCPD lacks professionalism. This kind of childishness by a deputy police chief would never be allowed nor condoned in San Jose. We deserve as much professionalism by our police as San Jose citizens receive.

The SCPD has operated for years without being held accountable for their actions. That Steve Clark has risen to the level of deputy chief illuminates the inbred, personal grudge driven SCPD culture.

Personally, I experienced then Captain Steve Clark arrogantly defending poor, sloppy police work which discriminated against a disabled woman. The SCPD seems unable to admit to its mistakes: this is the sign of a defective organizational culture.
Add a Comment
Support Independent Media
We are 100% volunteer and depend on your participation to sustain our efforts!