Newswire
Calendar
Features
Home
Donate
From the Open-Publishing Calendar
From the Open-Publishing Newswire
Indybay Feature
Publish to Newswire
Add an Event
Related Categories: Santa Cruz Indymedia | U.S. | Global Justice & Anti-Capitalism | Labor & Workers | Police State & Prisons
Longshore workers name Occupy movement as crucial in EGT settlement
by Steven Argue & Occupy EGT
Tuesday Feb 14th, 2012 11:23 PM
[The fight at Longview was a make-or-break struggle against union busting for the longshore workers of the ILWU. If EGT was able to break the union's jurisdiction there, other grain shippers would have moved to do the same. But the workers fought, the union held fast, the Occupy movement and ILWU stood-up together against union busting and police repression, the ruling class feared the unrest on the docks could spread, and the workers won on the question of jurisdiction. This was a significant victory.

Unfortunately, the union has also agreed to significant concessions including allowing scab labor to build the EGT plant, no overtime until after a 40 hour week, not all EGT waterside work need be performed by the ILWU, and a weakened union hiring hall allowing only a pool of workers "pre-qualified by EGT".

In addition, 220 heroic longshore workers and supporters are still facing police charges. Some of these people have been acquitted by juries and others have had their charges dismissed, but at least ten are facing felony charges. These include charges for coming to the aid of a woman who was being maced and brutally manhandled by cops. We must demand those charges be dropped along with the many unjust charges brought against Occupy protesters all across the country.

This settlement is a victory. ILWU workers are in the plant and the scabs are out. Credit goes to militant workers and supporters who would not back down in the face of intimidation by the cops and capitalist courts. 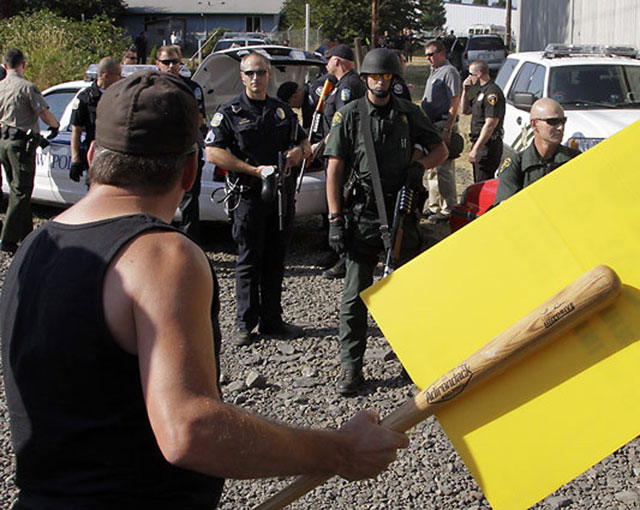 Photo by Don Ryan/AP. Longshore workers held the police off on September 7. Labor and supporters played hardball in this strike and won.

Longview, WA, Feb. 11, 2012 – Members of the ILWU and the labor community named the Occupy Movement as key to the settlement reached Thursday between ILWU Local 21 and the Export Grain Terminal (EGT). The contract finally provides for the use of ILWU labor in the grain terminal at the Port of Longview . After staging the December 12 port shutdowns in solidarity with Local 21, the West Coast Occupy Movement planned coordinated action together with labor allies for a land and water blockade of the EGT ship in Longview , should it attempt to use scab labor to load. Occupys in states where EGT's parent company Bunge has its growth and operations were also planning actions against the company on the day of the arrival of the ship.

"This is a victory for Occupy in their involvement in forcing negotiations. Make no mistake – the solidarity and organization between the Occupy Movement and the Longshoremen won this contract," said Jack Mulcahy, ILWU officer with Local 8 in Portland , Oregon . "The mobilization of the Occupy Movement across the country, particularly in Oakland , Portland , Seattle , and Longview were a critical element in bringing EGT to the bargaining table and forcing a settlement with ILWU local 21."

"West Coast Occupys had already demonstrated their ability to stage such a blockade by shutting down ports along the West Coast on December 12th, as well as the Port of Oakland on November 2nd," said Anthony Leviege, ILWU Local 10 in Oakland . The Occupy Movement shut down ports in order to express solidarity with port truckers and Local 21, as well as responding to a nationally-coordinated eviction campaign against Occupy.

Negotiations progressed to the point where Longshore workers began loading the merchant vessel Full Sources on Tuesday. "When any company ruptures jurisdiction it is a threat to the entire union. The union jobs wouldn't be back in Longview if it weren't for Occupy. It's a win for the entire class of workers in the Occupy Movement in demonstrating their organizational skills," said Leviege.

"It is clear that the port shutdowns on November 2nd and December 12th, and the impending mobilization in Longview , is what made EGT come to the table,” said Clarence Thomas, ILWU Local 10 Coastwide Caucus delegate. “When Governor Gregoire intervened a year ago nothing was settled – non-ILWU workers were still working in the port. It wasn't until rank and file and Occupy planned a mass convergence to blockade the ship that EGT suddenly had the impetus to negotiate.

"Labor can no longer win victories against the employers without the community,” Thomas continued. “It must include a broad-based Movement. The strategy and tactics employed by the Occupy Movement in conjunction with rank and file ILWU members confirm that the past militant traditions of the ILWU are still effective against the employers today."

EGT itself made evident the company's concern about Occupy's role in the conflict in the January 27 settlement agreement: "The ILWU Entities shall issue a written notice to The Daily News and the general public, including the Occupy Movement, informing them of this settlement and urging them to cease and desist from any actions…"

"The Occupy Movement and rank-and-file unionists both within and outside of our ranks have forced the company to settle, but this is not over," said Jess Kincaid of Occupy Portland. "Occupy doesn't sign contracts. We have not entered into any agreements with EGT, nor do we intend to do so. EGT and its parent company Bunge bribe the government for military escorts, use slave labor in Brazil and systematically avoid contributing anything to our social safety net in the US or abroad. There is no ethic here beyond putting money back in the pocket of the 1% at the cost of working people and the sustainability of the earth."

"It was the brave action of members of Local 21 blocking the train tracks this past summer that inspired the solidarity of the Occupy Movement up and down the West Coast and around the country,” said Paul Nipper of Occupy Longview. “It was not until Occupy joined together with Local 21 and its labor allies that the company returned to the table. Governor Gregoire did nothing but let EGT raid Longshore Jurisdiction until Occupy responded to the call for support."

For past Liberation News articles on the November 2nd strike and the EGT struggle see: