by Dan Bacher
"Since the striped bass fishery has declined from some 3 to 4 million adult fish in the 1960’s to 650,000 today, its collapse has paralleled that of several runs of listed salmonids that utilize the Bay-Delta estuary," stated John Beuttler of the Allied Fishing Groups. "It’s clear all of these fisheries are not being managed on a sustainable basis." 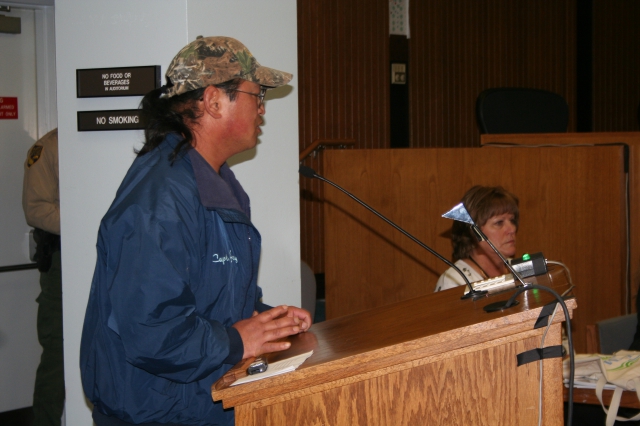 In a move celebrated by anglers and conservationists, the California Fish and Game Commission in Sacramento on Thursday, February 2 took final action to reject the Department of Fish and Game’s controversial proposed changes to striped bass regulations.

In a unanimous 4-0 decision, Commissioners voted not to pursue a proposal that would have liberalized sport fishing regulations related to anadromous striped bass, including increasing bag limits and decreasing size limits. Hundreds of anglers from an array of fishing groups attended the meeting and dozens spoke in opposition to what they described as the striped bass “eradication” proposal.

“This is great victory for northern California, its water, ecosystem and species,” said Victor Gonella, President of the Board of the Golden Gate Salmon Association (GGSA).

The GGSA opposed the DFG plan – and submitted an alternate proposal to the DFG plan focusing on reducing the pumping of Delta water and identifying and eliminating “hot spots” where striped bass and other predators congregate to prey on juvenile salmon.

Commission President Jim Kellogg made the motion after speaking passionately about his eyewitness experience with the results of export pumping when he worked from 1966 to 1969 on installing the first pumping station on the South Delta for the State Water Project.

“I was there when Governor Reagan was there to cut the ribbon on the completion of 7 pumps, including 4 big ones and 3 small ones,” said Kellogg. When the small pumps were turned on, he witnessed large numbers of fish going into the canal.

“There is more to this than striped bass predation – it’s about water pumping and saltwater intrusion in the Delta,” he noted. “And invasive species are just as big an issue, not just fish species but plants also.”

Kellogg, like many anglers in the room, noted that the striped bass and listed salmon and Delta smelt had coexisted for 130 years. He also declared that striped bass are a “native species” in California, since they have been here for so long.

“Nobody’s got an answer on how this is done, or who declares it, so I’m going to declare the striped bass a native species of the state of California,” he said.

Commissioner Dan Richards seconded the motion – and then the 4 Commissioners, including Jack Baylis and Michael Sutton, voted against the DFG proposal. The anglers in the room gave a standing ovation to the Commission after their vote.

“Adopting this proposal would be a violation of the Department’s and the Commission’s fiduciary obligations to hold the public’s fish and wildlife resources in trust and manage them at sustainable population levels in accord with the Commission’s policies and statutory responsibilities including your striped bass management policy,” said Beuttler.

“Since the striped bass fishery has declined from some 3 to 4 million adult fish in the 1960’s to 650,000 today, its collapse has paralleled that of several runs of listed salmonids that utilize the Bay-Delta estuary. It’s clear all of these fisheries are not being managed on a sustainable basis,” stated Beuttler.

The proposal that was introduced by the DFG arose out of a settlement agreement resulting from a 2008 lawsuit. In that lawsuit, the Coalition for a Sustainable Delta, an agribusiness Astroturf group consisting of San Joaquin Valley water districts, claimed that striped bass are “harming” native species, including endangered Central Valley chinook salmon and steelhead and Delta smelt.

Representatives from the Coalition, Department of Fish and Game and NOAA Fisheries spoke in favor of the proposal.

“We believe a yes vote is justified,” said DFG Director Chuck Bonham. “Striped bass predation is not the only factor or even the most significant factor in the decline of salmon and other listed species – but any angler who fishes for stripers sees how they predate on salmon.”

Bonham emphasized that striped bass predation is a “controllable” factor in reducing salmon and Delta smelt mortality. “This controllable factor is addressable by you through this proposal,” said Bonham.

Michael Boccadoro of the Dolphin Group, a spokesman for the Coalition for a Sustainable Delta, vowed further litigation if the Commission didn’t approve the striper eradication proposal.

“If the proposal is rejected, it only gets kicked backed into the federal courts,” said Boccadoro.

Three executives of Stewart Resnick’s Paramount Farms in Kern County founded the Coalition for a Sustainable Delta. Resnick is the politically connected Beverly Hills billionaire who has made tens of millions of dollars annually from buying and reselling water back to the public for a big profit.

The Coalition claimed that the striped bass, an East Coast fish introduced to the Sacramento over 130 years ago, should not be protected because the fish prey on protected chinook salmon and Delta smelt.

Anglers accused the Coalition of trying to blame striped bass “predation” for the decline of salmon and smelt in order to divert attention from record exports out of the Delta in recent years that resulted in the 2008-2009 Central Valley fall salmon collapse, in addition to the collapse of Delta smelt, longsfin smelt, threadfin shad, young striped bass and other species. The coalition’s backers want to divert more Delta water to San Joaquin Valley growers and southern California.

While supporters of Central Valley and Delta fish restoration scored a victory against the water contractors Thursday, this is one battle in a war by corporate agribusiness and southern California water agencies to take more water from the Delta. The same water contractors advocating for the striped bass eradication proposal are collaborating with the Brown and Obama adminstrations to build the peripheral canal, a project that would result in the extinction of Central Valley steelhead, Delta smelt, longfin smelt, Sacramento River chinook salmon, Sacramento splittail, green sturgeon and other imperiled fish species.

“This is a victory for any fisherman in Northern California, and a clear defeat of the agricorporations’ thinly-veiled greedy water grab,” said Jim Cox, President of the California Striped Bass Association, West Delta Chapter. “Had these changes been enacted, the striped bass would have been potentially fished to extinction, with no clear benefit to the salmon and delta smelt this was supposed to be protecting.

“The biological end of the DFG was forced to compile these regulation changes by the legal end of the Department to settle a lawsuit. Hoorah to the integrity of the Fish and Game Commission to see through this ‘fishery management by lawsuit’ and defend the autonomy of the regulation process. Particular credit goes to outgoing Commission President Jim Kellogg who, as his last piece of business in his two year term as President, declared striped bass a native species,” Cox concluded.
Related Categories: California | Central Valley | Environment & Forest Defense | Government & Elections
Add Your Comments
Comments (Hide Comments)
§One small battle won.
by Dawn Gulick
While I was tending the business today so that my husband could attend, I was able to watch the webcast. Bravo for everyone who turned out today! But we shall not rest easy. They will regroup and come back again. I fear we will be losing an advocate with Mr. Kelloggs resignation. I do not know who the ACWA representative was, but I found his "big word" comment odious. I can only presume that the elitest in that suit does not realize the fact that while Delta business owners and advocates may not wear suits, we are educated. SHAME.
END_OF_DOCUMENT_TOKEN_TO_BE_REPLACED
Add a Comment
§California Fish & Game Commissioner
by Jim Kellogg
I am still on the commission, but up for re-appointment right now. I didn't resign just rolled over the president position as required every two years. Will continue to be voice for hunters and fishermen.
Add a Comment
§Am praying for your re-appointment Mr. Kellogg
by Dawn Gulick
You are my hero. Thank You for standing up for The Delta.
Add a Comment
Support Independent Media
We are 100% volunteer and depend on your participation to sustain our efforts!