Launching the campaign to put the voters’ right to decide on desalination on the ballot!

Adam Scow, from Food and Water Watch, will speak on “How We Won the Right to Vote on Desal in Marin”, about the successful 2010 ballot initiative that requires the Marin Water District to get approval from the voters before building a plant on the San Francisco Bay.
Barbara Sprenger, co-organizer of Felton Friends of Locally Owned Water (FLOW). Felton FLOW successfully wrested ownership of the water system from multinational giant, CAL-Am Water.


If you can’t attend the kickoff, please support this petition drive with a contribution,
- and - let us know if you can gather signatures of Santa Cruz voters.

RightToVoteOnDesal.org
831 449-6441
RightToVoteOnDesal [at] gmail.com
Added to the calendar on Mon, Jan 30, 2012 11:50AM
Related Categories: Santa Cruz Indymedia | Environment & Forest Defense | Government & Elections | Health, Housing & Public Services
§Our Mission: Let the Voters Decide
by vote on desal sc . org
Our community is at a crossroads. Faced with periodic droughts and a federal mandate to reduce our water diversion from area streams we need to take action to make our water supply more resilient. We can choose:

* Desalination: a highly expensive and energy intensive process for manufacturing fresh water from ocean water, or

Since this choice will affect our community for generations to come, we say, “Let the Voters Decide”. We will be gathering signatures for an initiative to go on the November 6th ballot that reads,

“The purpose of this Charter Amendment is to enact a comprehensive policy ensuring that the City of Santa Cruz does not approve, permit, or fund a desalination project without voter approval.” For complete text, click here (http://voteondesalsc.org/text-of-charter-amendment/).

Join us by volunteering to get signatures, and by donating for the legal drafting costs and campaign.Thanks!
END_OF_DOCUMENT_TOKEN_TO_BE_REPLACED
§Text of Charter Amendment
by vote on desal sc . org 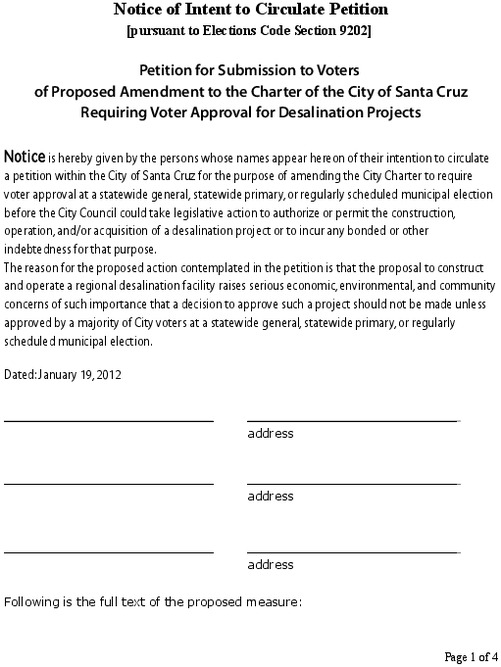 Download PDF (86.6KB)
Section 1. Purpose. The purpose of this Charter Amendment is to enact a comprehensive policy ensuring that the City of Santa Cruz does not approve, permit, or fund a desalination project without voter approval. Accordingly, this Charter Amendment would require an affirmative vote by a simple majority of Santa Cruz voters at a statewide general, statewide primary, or regularly scheduled municipal election before any such desalination project could be implemented.

Section 2. Findings. The citizens of the City of Santa Cruz find:
(a) that the proposal to construct and operate a desalination facility raises serious economic, environmental, and community concerns of such importance that a decision to approve such a project should not be made unless approved by a majority of voters at a statewide general, statewide primary, or regularly scheduled municipal election. (b) that the City has already spent millions of dollars in pursuit of desalination without a public vote or rate payer approval. According to the City Urban Water Management Plan, “The current estimated cost for design, permitting, property acquisition and construction of a regional desalination plant between 2010 and 2018 is approximately $116 million.”
Ratepayers will pay many millions more in debt service, operation, and maintenance. (c) that there are less costly and less environmentally damaging alternatives to desalination. These include, but are not limited to, effective water-neutral development policies, increased incentives for conservation, operational improvements to the reservoir system, infrastructure upgrades, leak detection, increased water storage capacity, water recycling, plumbing fixture and appliance retrofits, drought-tolerant landscaping, gray water irrigation, rainwater harvesting, water transfers between districts, and watershed restoration. (d) that implementation of a comprehensive program of alternatives to desalination would provide significant public benefits by supplying water at less cost to rate payers, with less damage to the environment, using far less energy, and would also help to create local jobs and business opportunities.

Section 3. Charter Amendment. The City Charter of the City of Santa Cruz is amended to add a new Section 1431, as follows: Section 1431 – Voter Approval for Desalination Projects
(a) Voter Approval. Notwithstanding any other provision of this Charter, no legislative action by the City that would authorize or permit the construction, operation, and/or acquisition of a desalination project, or that would incur any bonded or other indebtedness for that purpose, shall be valid or effective unless such action is authorized by an affirmative vote of a majority of qualified electors in the City of Santa Cruz voting on the question at a statewide general, statewide primary, or regularly scheduled municipal election. Provided that it has first fully complied with the California Environmental Quality Act, Public Resources Code section 21000, et seq., the City Council may put the question of approval of such action before the voters at a statewide general, statewide primary, or regularly scheduled municipal election according to any procedure authorized by this Charter. (b) Definitions.
(1) As used in this section, “legislative action” means adoption of or amendments to the City’s General Plan, Zoning Map, Zoning Code, Municipal Code, or approval of a development agreement, or any other act by the City Council that is legislative in nature.
(2) As used in this section, “desalination project” means any project intended to provide potable domestic, commercial, and/or industrial water supply through the removal of salts and other minerals from ocean water, regardless of the physical or chemical process used.

Section 6. Retroactive Application. In the event this Charter Amendment is adopted by the voters, its provisions shall apply retroactively as of the date the measure was found to have qualified for placement on the ballot.
END_OF_DOCUMENT_TOKEN_TO_BE_REPLACED
Add Your Comments
Latest Comments
Listed below are the latest comments about this post.
These comments are submitted anonymously by website visitors.
TITLE
AUTHOR
DATE
more from The Land Use Report
KUSP 88.9 (repost)
Support Independent Media
We are 100% volunteer and depend on your participation to sustain our efforts!