Add an Event
Newswire
Calendar
Features
Home
Donate
From the Open-Publishing Calendar
From the Open-Publishing Newswire
Indybay Feature
Publish to Newswire
Add an Event
Related Categories: San Francisco | Global Justice & Anti-Capitalism | Health, Housing & Public Services
Thousands in San Francisco "Occupy Wall Street West"
by Josh Healey
Monday Jan 23rd, 2012 12:06 PM
Sal Alper sat casually in front of the Wells Fargo headquarters in downtown San Francisco, as if chaining herself to the banking giant's front doors was a normal thing to do on a Friday morning. As one of the many Occupy San Francisco protests on January 20, Sal had joined dozens of people in blockading since 6:00 a.m., so by the time I arrived on the scene at mid-morning, she was smiling and relaxed. When I asked her why she was protesting the banks, however, her smile quickly faded. 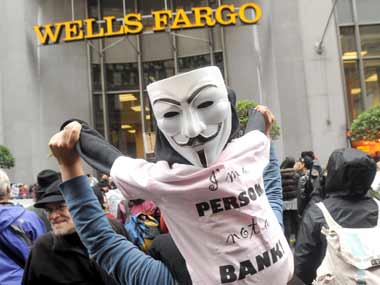 [Originally published at The Progressive: http://progressive.org/occupy_wall_street_west.html]

Sal Alper sat casually in front of the Wells Fargo headquarters in downtown San Francisco, as if chaining herself to the banking giant's front doors was a normal thing to do on a Friday morning. As one of the many Occupy San Francisco protests on January 20, Sal had joined dozens of people in blockading since 6:00am, so by the time I arrived on the scene at mid-morning, she was smiling and relaxed. When I asked her why she was protesting the banks, however, her smile quickly faded.

"My parents lost their home to a bank foreclosure two years ago," Sal said. "They moved in with my uncle, but then he lost his home too. So they all moved over to my grandma's -- and now she is being threatened too! And it's all because of these banks right here."

Such stories of anger and resistance were everywhere in San Francisco, as thousands of protesters took over the streets of the city's financial district in their ambitious attempt to "Occupy Wall Street West." In a daylong series of building occupations, marches, and civil disobedience, Occupy San Francisco organizers mobilized the biggest direct action in the city since the start of the Iraq War in 2003. While unable to fully shut down the business district, activists mounted the largest Occupy action in the country of 2012 so far, as they begin the next phase of the rising movement for social and economic justice.

The protests were organized to coincide with the two-year anniversary of the Supreme Court's Citizens United decision, which declared corporations to be people and anonymous campaign contributions to be free speech. While cities around the country held demonstrations at courthouses to contest the controversial ruling, Occupy San Francisco decided to take their actions to the corporate elite themselves. As one protester's sign on Market Street read, "I'll believe Citibank and Bechtel are people when Texas tries to execute them."

Both the Citibank and Bechtel offices were in fact targets throughout the day for activists, whose numbers were somewhat diminished by the largest rainstorm of the winter. Protesters also chained themselves in front of Bank of America's regional headquarters and several nearby branches, transforming one office into a "People's Food Bank of America," where they proceeded to give out free, hot, and of course organic food to anyone who asked. Bank of America and Wells Fargo are the two institutions that have foreclosed on the most people in San Francisco, especially in the largely black and Latino communities of Bayview, Excelsior, and the Mission.

It was definitely not a good day overall for Wells Fargo, as later in the day, more activists arrived to march from the bank to the nearby Immigration and Customs Enforcement (ICE) offices. Led by Causa Justa / Just Cause, a multi-racial community organization, over five hundred people denounced the Obama administration's massive deportations of immigrants as well as Wells Fargo's corresponding investments in detention centers and private prisons. The crowd here was especially loud and vibrant, as noted by the first of several (but not enough) bilingual chants of the day: "We are the 99%! / Somos el noventa y nueve!"


Further uptown, a hundred students from San Francisco State took over the lobby of the California state office building. Joined by students and teachers from area high schools and colleges, they rallied in support of the "Millionaire's Tax", a proposed referendum that would drastically raise taxes on the very wealthy and direct those funds for education and social services. Aware of current California politics, the students made clear that this referendum was opposed to Gov. Jerry Brown's own tax proposal, which would not affect tax the rich as deeply much and includes a sales tax that would mainly affect working people. While some Occupy activists want little to do with electoral politics, the education wing of the movement seems willing to both mobilize in the streets and engage in legislative activity. This type of inside-outside strategy could serve the movement well in the long run.

Just down the street, the Dancing without Borders flash mob was less concerned with income revenues than choreographed twists and twirls. The group, whose first Occupy flash mob has been seen by 150,000 people online, decided to take its newest street action to the offices of perhaps Wall Street's worst poster boy, Goldman Sachs. There were no picket signs and bullhorns here, however. As music started playing from an unknown boombox, dozens of dancers suddenly emerged from the crowd to get their anti-corporate boogie on, delighting both nearby activists and pedestrians walking by.

"This movement needs more creativity and joy," said Rae Abileah, a flash mob dancer and Code Pink activist. "It isn't what the media puts out...fighting the cops and all that. It is about building a better world for the 99% -- and for the 1% too if they could realize it."

Overall, there was little confrontation with the police, especially compared to the ongoing Occupy-police skirmishes across the bay in Oakland. Throughout the day there were 20 arrests, most of which took place at Wells Fargo. At 5:00pm all the small groups converged for a final march down Market Street, with new people just getting off work to swell the ranks. During the final march, a few small confrontations did erupt, with police pepper-spraying ten people at one point. Later, a group of activists briefly occupied the vacant Cathedral Hill Hotel, but the police forced them out within a few hours.

A few protesters smashed a window at the Bentley luxury car dealership, but in a welcome move, Occupy San Francisco quickly denounced the minor property damage as contradicting the action agreements decided by their General Assembly. Amidst the debate about violence within the movement, Occupy Wall Street West showed that you can use militant tactics and still remain non-violent. All the major January 20 actions were strategically organized and carried out with precision and discipline.

In the final analysis, Occupy San Francisco did not stop business as usual in most of the financial district. That would have taken many more people than the few thousand that came out. What they did achieve, however, was to impact some of Wall Street's worst corporate offenders. Perhaps more important than any single action, the day of protests reminded the 1% that Occupy is not going away. Just the opposite. Only a month after the police raided its tent encampment, Occupy San Francisco has emerged stronger than before, strengthened by the over 50 community groups that formally joined the Occupy Wall Street West action. To many protesters, this was the most powerful part of January 20.

"Every important community sector in the city came out today -- housing groups, neighborhood groups, unions, teachers, students, immigrants, veterans, you name it," said David Solnit, a long-time San Francisco activist and key organizer of the day's mobilization. "This is the future of the movement: bringing together local struggles with these national direct actions...that is how we'll make 'The 99%' a real movement and not just a slogan."
http://progressive.org/occupy_wall_street_...
Add Your Comments
Support Independent Media
We are 100% volunteer and depend on your participation to sustain our efforts!