Ralph Nader and the Billionaires 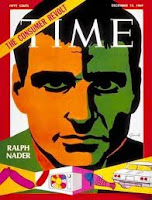 Ralph Nader is the founder of the consumers' rights movement. He played a key role in the creation of the Environmental Protection Agency, the Occupational Safety and Health Administration, the Freedom of Information Act and the Consumer Product Safety Commission. He has harshly criticized the two major political parties for preserving a campaign finance system that makes them both dependent on wealthy contributors.

Ted Turner founded of the cable news network CNN and the cable channel TBS. He owns 2.1 million acres of land across 12 states and also 100,000 acres in South America. According to Forbes magazine he is worth $2.1 billion. The United Nations Foundation was started with a $1 billion grant from Ted Turner to support the United Nations in executing its programs worldwide.

Music includes R.E.M. - It's The End Of The World As We Know It, John Fogert - Deja Vu (All Over Again), Jimi Hendrix - If 6 Was 9, Gil Scott-Heron - The Liberation Song (Red, Black And Green), Beatles - Rocky Raccoon

Great Speeches and Interviews' Past Programs
END_OF_DOCUMENT_TOKEN_TO_BE_REPLACED
Added to the calendar on Thu, Jan 12, 2012 7:54AM
Add Your Comments
Support Independent Media
We are 100% volunteer and depend on your participation to sustain our efforts!