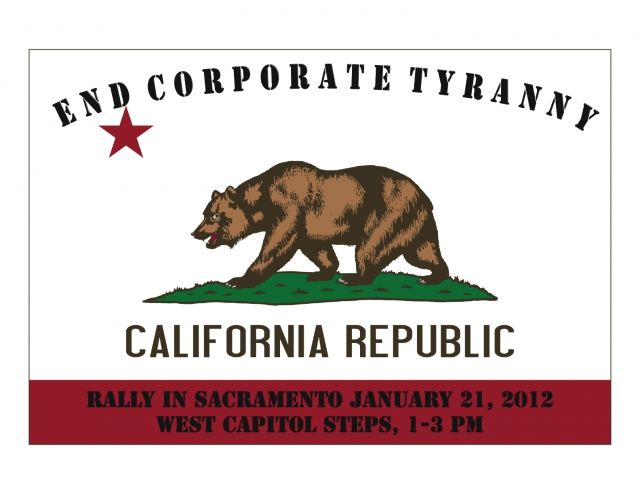 Import event into your personal calendar
Date:
Saturday, January 21, 2012
Time:
1:00 PM - 3:00 PM
Event Type:
Protest
Organizer/Author:
Helen Grieco
Email:
HGrieco [at] commoncause.org
Phone:
415-531-1774
Location Details:
West Capitol Steps, Sacramento
Join us on this national Day of Action at the West Capitol Steps in Sacramento to mark the 2nd Anniversary of the disastrous Citizens United Ruling. We are here to support--and to strengthen--a newly proposed Assembly Joint Resolution that instructs Congress to repeal Citizens United and "restore constitutional rights and fair elections to the people." Come with signs urging legislators to pass a state resolution that tells the nation that speech is not money and corporations are not people. Speakers TBA; entertainment provided by members of the SF Mime Troupe.


This Saturday, January 21, is the two-year anniversary of the U.S. Supreme Court’s disastrous ruling in Citizens United v. Federal Election Commission, which held that corporations have a “right” to spend unlimited money influencing elections.

Sign up today to attend the Citizens United anniversary rally in Sacramento!

Here are the details:
What: Rally to Overturn Citizens United
When: Saturday, January 21, from 1 to 3 p.m.
Where: California State Capitol Building, 1315 10th St., Sacramento, Calif.

This rally is critical to building momentum for Assembly Joint Resolution 22, which calls on the U.S. Congress to ratify and send to the states an amendment that would overturn Citizens United and “restore constitutional rights and fair elections to the people” (thus, ending corporate personhood and allowing limitations on all forms of election spending). California could become the second state (after Hawaii) to proclaim that its legislature stands ready and eager to ratify a constitutional amendment overturning Citizens United.

Californians have been at the forefront of the growing movement to stand up to corporate power and take back our democracy. By making your voice heard in Sacramento next Saturday, you can ensure that this momentum continues unabated, and the entire nation takes notice that citizens throughout the land are determined to reclaim our elections and our Constitution.

Join us in Sacramento as we build on the momentum of recently passed city council resolutions in Los Angeles and Oakland calling for a constitutional amendment.

The rally is being held as part of the national Days of Action being organized by Public Citizen and more than 50 other sponsoring organizations, including Common Cause, Communication Workers of America, Free Speech for People, MoveOn.org, Greenpeace, 350.org, People For the American Way, Move to Amend and California Church IMPACT.

Join us in Sacramento on January 21!

END_OF_DOCUMENT_TOKEN_TO_BE_REPLACED
Add Your Comments
Support Independent Media
We are 100% volunteer and depend on your participation to sustain our efforts!