Add an Event
Newswire
Calendar
Features
Home
Donate
From the Open-Publishing Calendar
From the Open-Publishing Newswire
Indybay Feature
Publish to Newswire
Add an Event
Related Categories: International | Environment & Forest Defense
Scientific breakthrough: Remove CO2 from pollution and atmosphere for alternate fuel
by Takver - Climate IMC
Saturday Jan 7th, 2012 4:59 AM
An improved method of removing carbon dioxide (CO2) cheaply from industrial smoketacks and even scrubbing the air has been discovered which may help in stabilising climate and reducing carbon emissions. Resolving the huge problem of climate change and global warming is going to take significant action on many levels. This new technology, if it can be rapidly developed and commercialised, may prove extremely useful in reducing carbon emissions and ultimately helping our society to become carbon negative. But the scientists have gone a further step and propose turning the captured carbon dioxide into an alternate stable fuel called renewable methanol to assist in resolving the peak oil petroleum resource depletion problem. 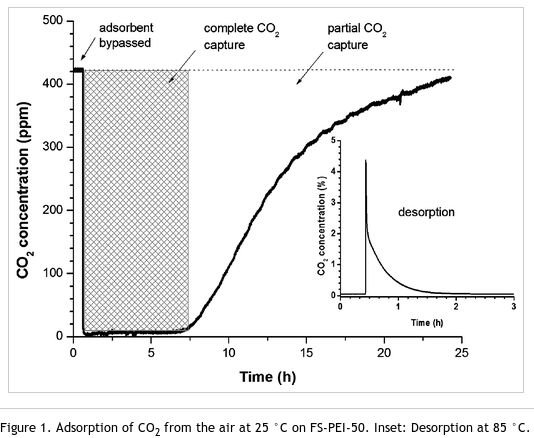 The new process was discovered by Alain Goeppert, G. K. Surya Prakash, and chemistry Nobel Laureate George A. Olah and others based at the Loker Hydrocarbon Research Institute and Department of Chemistry, University of Southern California. They were successful in using inexpensive materials to achieve some of the highest carbon dioxide removal rates ever reported for humid air, under conditions that stymie other related materials. The scientists were also able to remove the captured carbon dioxide easily for making other substances potentially isolating the carbon from the environment. The adsorbent material can then be recycled for repeated use in capturing carbon dioxide.

"Easy to prepare solid materials based on fumed silica impregnated with polyethylenimine (PEI) were found to be superior adsorbents for the capture of carbon dioxide directly from air. During the initial hours of the experiments, these adsorbents effectively scrubbed all the CO2 from the air despite its very low concentration. The effect of moisture on the adsorption characteristics and capacity was studied at room temperature. Regenerative ability was also determined in a short series of adsorption/desorption cycles."

The introduction to the main article summarises the problem and how the new materials technology may assist:

"The ever increasing consumption of fossil fuels by humankind resulted in an accumulation of carbon dioxide in the atmosphere, from a concentration of 270 ppm before the industrial revolution to more than 390 ppm today. It is now widely accepted that anthropogenic CO2, due to its role as a greenhouse gas, is the major contributor to climate change. Other environmental implications of these emissions, such as ocean acidification, are also becoming increasingly apparent and worrisome. Thus, CO2 management is one of the most challenging issues of our century. Capture and sequestration of CO2 (CCS) underground has been proposed, but none of the existing technologies has been proven on the enormous scale needed. We also need to make sure that if billions of tons of CO2 are pumped underground it also remains there and does not leak out over time. While fossil fuels will be used for as long as they can be easily and economically produced, it should also be clear that their amounts are finite and that they are increasingly depleted. Post-fossil fuel alternative sources of carbon therefore need to be found to fulfill our needs for fuels, hydrocarbons, polymers, and other products presently derived mostly from petroleum oil and natural gas. Instead of considering CO2 as a problematic and unwanted combustion byproduct, it should be seen as a valuable feedstock for the production of fuels and materials. While the required CO2 can be presently captured from concentrated industrial sources, eventually it will have to be obtained directly from the atmosphere."

The scientists used a polymer called polyethylenimine (PEI) as the basis for adsorbing carbon dioxide. Adsorption occurrs when atoms stick to a material's surface, as against the absorption process where atoms permeate material. Nitrogen in the polymer forms a link to carbon when carbon dioxide is present. When the adsorber material is heated to 100C, the link breaks releasing the carbon allowing for easy and relatively cheap way to collect and concentrate carbon dioxide.

The technology is a long way from commercialistion with much more research and then development required to make this a commercial industrial scale technology. The study authors conclude:

Being a solid adsorbent, FS-PEI avoids many of the problems associated with existing CO2 separation technologies relying on liquid amine based scrubbers. Clearly, adsorbents based on supported amines are promising inexpensive materials for the capture of CO2 from the atmosphere and warrant further studies.

This breakthrough research comes after many years of work by George Olah and G.K. Surya Prakash on the problem of alternate fuels. Oil and gas are being depleted and will eventually run out. Some say we have already passed the peak of peak oil. George Olah and G.K. Surya Prakash have been working on turning the carbon dioxide / greenhouse gas pollution problem into a part of the solution for resolving the problem of petroleum resource depletion.

Methanol is relatively straightforward and cheap fuel to produce, easy to store and transport and is seen by some scientists as overcoming the large problems of using hydrogen as a widespread fuel for transportation. "Hydrogen gas is still difficult to store and distribute. It is for this reason we have targeted producing methanol, which is easy to use as a fuel." says Dinko Chakarov, professor of physics at Chalmers University of Technology in Sweden December 2011 media release. "Carbon dioxide currently comes from carbon dioxide separation during carbon combustion, for example," says Dinko Chakarov. "In the future, we hope it will be possible to condense carbon dioxide from the air, which would result in an entirely carbon dioxide neutral cycle."

Methanol or methyl alcohol is the simplest of all alcohols. It's chemical structure is CH3OH. It can be mixed with petrol or with some modification used alone in modern petrol engines or converted to biodiesel. It can also be used in fuel cells and be burned in existing power generation plants. Methanol can also be used as the raw ingredient for the plastics industry to replace petroleum.

"I do believe a large-scale breakthrough for the method is not that far down the road - perhaps ten years from now," says Dinko Chakarov. "I am convinced that we are going to improve the process, and it yields very effective usage of solar energy. For example, it is at least 50 times more effective than the 'shortcut' that involves producing methanol from biomass." said Chakarov.

It seems the breakthrough has happened much earlier than Chakarov expected, although much more study and research is still required into the new materials and process before they can be developed for commercialistion.

"We believe methanol can be the salvation for humankind once we run out of oil and gas," said Prakash, the George A. and Judith A. Olah Nobel Laureate Chair in Hydrocarbon Chemistry and professor of chemistry. "The greenhouse problem is relevant for all of mankind. We're creating short- and long-term solutions." they explained in a November 2011 news article from USC Dornsife.

The scientists at USC envisage cheap capture of CO2 can then be converted using renewable energy into methanol to be used as a transport substitute for petroleum based fuels. "The methanol economy is past the research stage and is in the process of being put into commercial and practical use," Olah said. "Unfortunately for the time being, not in the United States, but in countries like China and Iceland."

The scientists have been advocating the adoption of the Open Fuel Standard Act that is currently held up in Congress, although it has bi-partisan sponsorship. This legislation is designed to end the oil industry's monopoly over the transportation fuels market and stimulate investment in renewable fuels in the US. But the act is publicly opposed by the auto manufacturers, and right wing free market think tanks like the Heritage Foundation (article) and the Competitive Enterprise Institute (article) that do much of the support for climate scepticism and denial, opposition to climate action, and receive support from the oil industry barons, including funding from Koch Foundations.

China already has a significant methanol manufacturing capacity which is likely to increase as methanol is blended with petroleum for vehicle fuels.

The first commercialisation of the process of turning captured CO2 to methanol is ocurring in Iceland where Carbon Recycling International have their first commercial plant operating located in Svartsengi on the Reykjanes peninsula. It started producing an initial 2 million liters per annum of Renewable Methanol (RM), with plans to increase production in 2012 to 5 million liters per year. The first industrial scale plant cost about US$15 million to build.

The actual catalytic process is free of carbon dioxide emissions, and the emissions being captured were once vented to the atmosphere. Capturing carbon dioxide from the geothermal water well of a geothermal power station, enables the company to manufacture Renewable methanol cheaply and reduce carbon emissions. The fuel can then be used for energy storage, blended with petrol, turned into biodiesel, or used by itself with slight modification in petrol vehicles at a considerable cost effectiveness and relative efficiency in comparison to petrol.

"This technology is a decade old and has proven that it is possible to produce methanol through the catalytic conversion of CO2 .It was not until recently that the technology was developed to convert CO2 to liquid methanol outside of a laboratory environment. " said Benedikt Stefánsson Director of Business Operations of CRI in a November 2011 media release.

The company is negotiating to build a larger plant at Krafla for producing 50 million liters a year of renewable methanol for export. " The methanol will be added to gasoline. We are the first company in the world to produce renewable methanol out of hydrogen and CO2" says Benedikt, he adds " according to the European Union regulations, a 3 % blend of methanol can be added to gasoline. Our goal is to produce a fuel that is compatible with all gasoline vehicles as they are today. Iceland has a long way to go to catch up to other countries when it comes to utilizing renewable fuel."

While this is a significant breakthrough, it should be seen as one part of a solution to reducing emissions to tacke climate change. We still need to drastically reduce our carbon pollution emissions to stabilise our climate which will involve adopting stringent vehicle emissions standards and providing more efficient public transport, closing carbon intensive coal and gas fired power stations and building renewable sources of power such as hydro-electric, solar PV, Concentrating solar thermal with storage, wind farms, wave, tidal, and geothermal power.

But even after we achieve zero emissions we will need to go carbon negative by using technologies such as cheap carbon capture from the atmosphere and carbon farming to draw some of the massive accumulation of CO2 in the atmosphere into carbon sinks or stable storage.

The Idea of a Magic CO2 Remover is another Red Herring like the Oxymoronic, Clean Coal. We need to reduce our burning of Fossil Fuels Drastically and Immediately, because we did not do so decades ago; when we could have done so more easily.
Add a Comment
§Perpetual motion CO2 recycling nonsense
by Peter Hendra
Tuesday Jan 10th, 2012 12:56 AM
I've just read with incredulity, the article entitled: Scientific breakthrough: Remove CO2 from pollution and atmosphere for alternate fuel.

Unfortunately to convert CO2 to methanol takes just as much energy as is released through combustion of methanol. In fact it takes more energy since energy will always be lost as waste heat in every cycle.

In suggesting this silly "perpetual motion" energy cycle the author makes a basic mistake - you can't get something for nothing. My suggestion to avoid such embarrasing mistakes: get articles checked by someone with scientific knowledge before publishing.
Add a Comment
Support Independent Media
We are 100% volunteer and depend on your participation to sustain our efforts!