Add an Event
Newswire
Calendar
Features
Home
Donate
From the Open-Publishing Calendar
From the Open-Publishing Newswire
Indybay Feature
Publish to Newswire
Add an Event
Related Categories: East Bay | Police State & Prisons
Occupy Oakland Vigil Raided, Several Arrested
by via OOM
Thursday Jan 5th, 2012 11:14 AM
Around 11:30p.m. on Wednesday night, a contingent of about 60 police in riot gear appeared at the Occupy Oakland vigil in Oscar Grant Plaza and arrested about eight to twelve people, many of whom are members of the media team. The police abruptly left after “destroying everything” at the peaceful vigil, and no reason was given for the sudden raid and arrests. A small group of a dozen (which soon grew to forty) Occupiers immediately marched to the Alameda County Sheriff’s Office to protest the random arrests and show support for those being held in custody. They were told by a group of police in front of the jail that if they came closer, they would also be arrested. 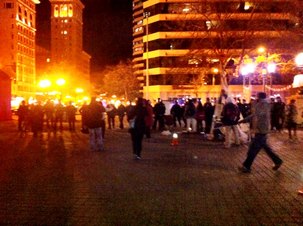 
The mainstream media is speculating that the small raid was a response to a dispute between Occupy Oakland protestors and the police over the permit for our 24/7 vigil, which was revoked following the cops’ complaints about the presence of trash cans and people sharing food near the information table.

There is at least one report that eyewitnesses saw police comparing targeted protestors to photos before making the arrests, which is consistent with stories of police surveillance of Occupy Oakland protestors. These arrests also follow months of harassment of Occupy Oakland by Oakland police, harassment which seems to have intensified in the past few weeks. Reasons for some of the most recent arrests include carrying a yoga mat and having a bike in the plaza.
http://hellaoccupyoakland.com/2012/01/05/o...
Add Your Comments
Support Independent Media
We are 100% volunteer and depend on your participation to sustain our efforts!