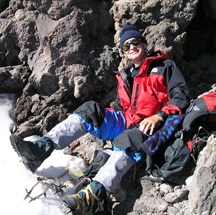 In a move that reeks of political cronyism and nepotism and demonstrates the inordinate power of the oil industry in California, Governor Jerry Brown appointed Secretary of State Debra Bowens's husband, Mark Nechodom, to Chair California's Department of Conservation on December 28.

Nechodom, 56, replaces Derek Chernow, the acting director of the Department who Brown fired in a major environmental scandal last month. Brown fired Chernow and Elena Miller, who oversaw oil drilling operations in California, amidst claims by the oil industry and their political allies that the two officials weren't granting permits quickly and easily enough.

He received his doctorate in political science from the University of California, Santa Cruz. This position requires Senate confirmation and the compensation is $136,156. Nechodom is a Democrat.

Nechodom has apparently been appointed by Brown to streamline the permitting process to the benefit of the oil and gas industry - and to the detriment of fish, wildlife, the environment and the people of California. This is yet one more example of how Brown, in the service of the Wall Street 1 percent, is a disaster for the environment and the 99 percent of Californians.

"That's not something you just ignore," Catherine Reheis-Boyd, president of the Western States Petroleum Association told the Californian.

"She and others said it was no coincidence that Elena Miller's ouster Thursday as state oil and gas supervisor came just a week after the top executives at Los Angeles-based Occidental Petroleum Corp. and Denver's Berry Petroleum Co. said they faced slowdowns in getting permits from California regulators -- a reference to Miller's Division of Oil, Gas and Geothermal Resources," according to the Californian.

It is also no coincidence that Reheis-Boyd, who put pressure on Brown to fire the two officials for actually doing their job, chaired the Marine Life Protection Act (MLPA) Blue Ribbon Task Force that created the fake "marine protected areas" that will go into effect on the Southern California Coast on January 1. The MLPA Initiative, in an classic case of corporate greenwashing, was funded by a private corporation, the shadowy Resources Legacy Fund Foundation.

While the corporate media and Wall Street and Walmart-funded NGOs are gushing about the alleged "marine parks" and "Yosemites of the Sea" that will go into effect on January 1, they refuse to acknowledge the key leadership role that Reheis-Boyd played in the creation of these questionable "marine protected areas" that fail to actually protect the ocean.

Reheis-Boyd and other corporate operatives on the task force made sure that the "marine protected areas" fail to protect the ocean from oil spills and drilling, pollution, military testing, corporate aquaculture, wind and wave energy projects and all other human impacts on the ocean than fishing and diving.

"Oil companies are 'extremely happy' about the governor’s decision, Catherine H. Reheis-Boyd, president of the Western States Petroleum Association, a Sacramento-based trade group, said yesterday in a telephone interview," reported Bloomberg News. “They have been extremely frustrated dealing with an agency that in the past had a wonderful working relationship with industry.”

You can bet that Reheis-Boyd and other ocean industrialists, along with their corporate "environmental" NGO allies, will be also very happy that about the questionable "marine protected areas" that will kick fishermen off the water but do nothing to provide true, comprehensive protection for Southern California marine waters starting New Year's Day.

Jerry Brown and his Resources Secretary John Laird are not just continuing Schwarzenegger's abysmal legacy by fast-tracking the Bay Delta Conservation Plan (BDCP) to build the peripheral canal and implementation of the Marine Life Protection Act Initiative. They are in fact surpassing Schwarzenegger in some areas, including authorizing the record export of water out of the Sacramento-San Joaquin Delta this year and presiding over the record "salvage" of over 11 million fish, including 9 million Sacramento splittail, at the Delta death pumps this year.
Add Your Comments
Support Independent Media
We are 100% volunteer and depend on your participation to sustain our efforts!