Add an Event
Newswire
Calendar
Features
Home
Donate
From the Open-Publishing Calendar
From the Open-Publishing Newswire
Indybay Feature
Publish to Newswire
Add an Event
Related Categories: East Bay | Global Justice & Anti-Capitalism | Police State & Prisons
Interview with Occupy Oakland Lake Merritt Aquapiers After Arrest, 12/15/11: video & photos
by Dave Id
Tuesday Dec 27th, 2011 10:56 PM
Before dawn on December 11th -- and just one day before the Occupy movement's West Coast Port Blockade -- a group of occupiers seized the waterways of Oakland's Lake Merritt. The action came to be known as Aquapy. The aquapiers' launched a homemade raft named the "SS Don’t Let the Banks Punk You Out" with two large banners attached, one announcing the December 12th port shutdown and another that read, "You Can Occupy Anything." On December 15th at about 10pm, Oakland police approached the aquapiers' vessel under the cover of darkness, handcuffed the three men on the boat, and took them into custody on a pontoon boat. After bringing the aquapiers back to shore and searching them at the Lake Merritt boating center, the three were cited for violation of Oakland Municipal Code 12.64.200(a) and released. They were told their boat was impounded and would not be returned. The Lake Merritt occupiers spoke about their time on the water and their arrests just after being released. [Video below] 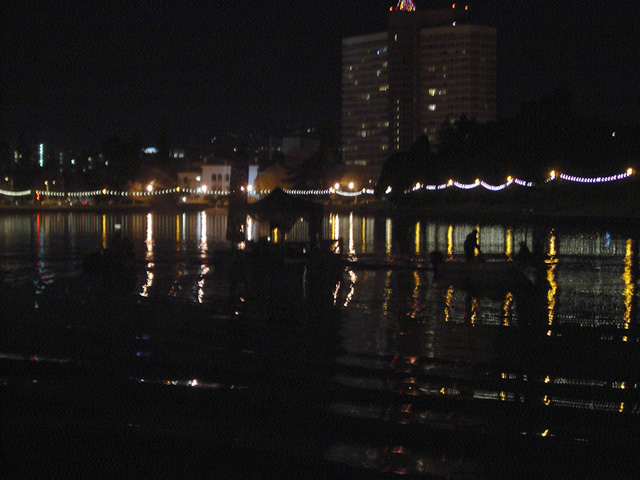 [Pictured above: a small motorboat pulls the "SS Don’t Let the Banks Punk You Out" to the docks at Lake Merritt] 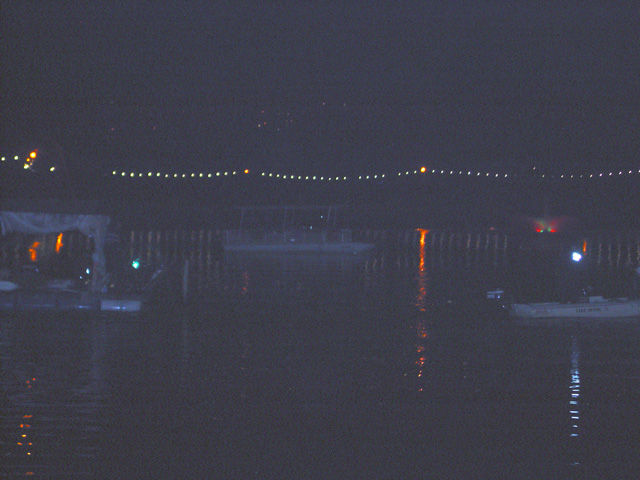 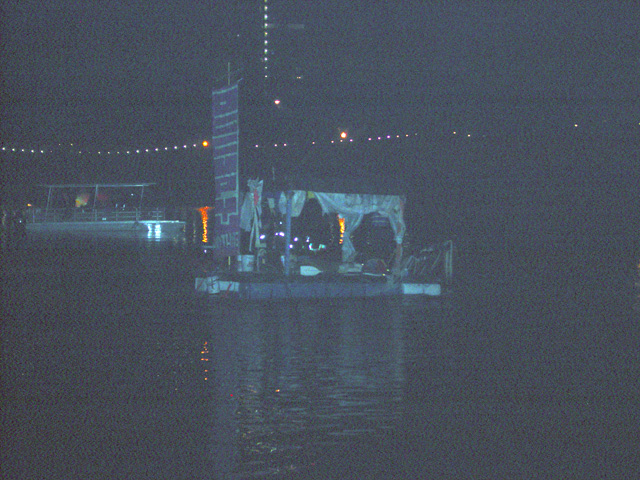 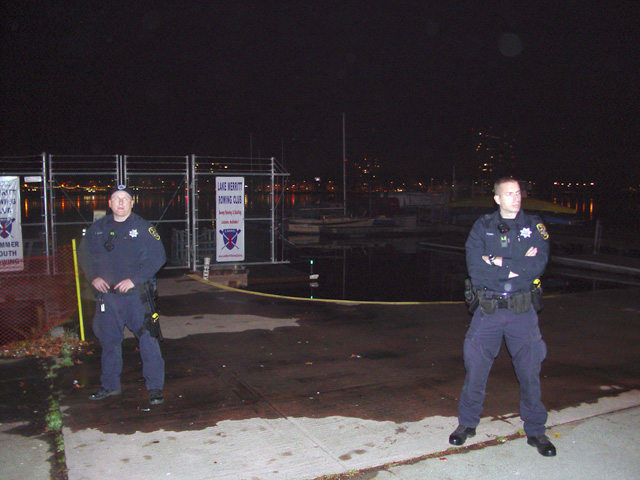 http://www.indybay.org/occupyoakland
§Canine unit was amongst a half dozen OPD cruisers at the scene
by Dave Id Tuesday Dec 27th, 2011 10:56 PM 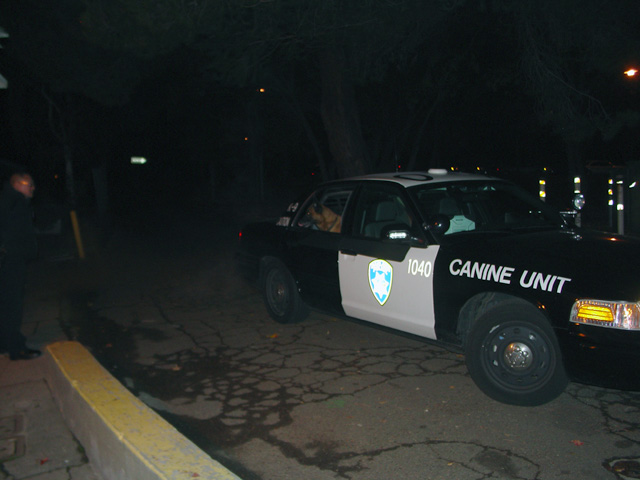 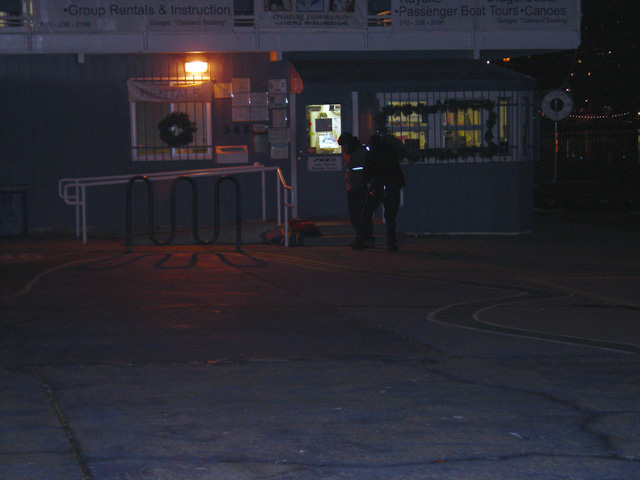 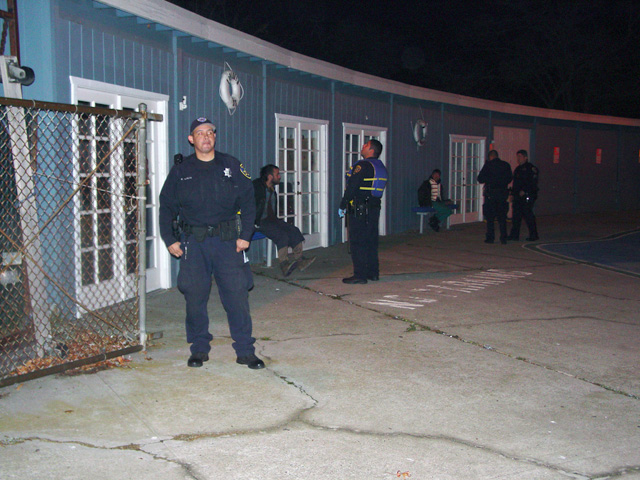 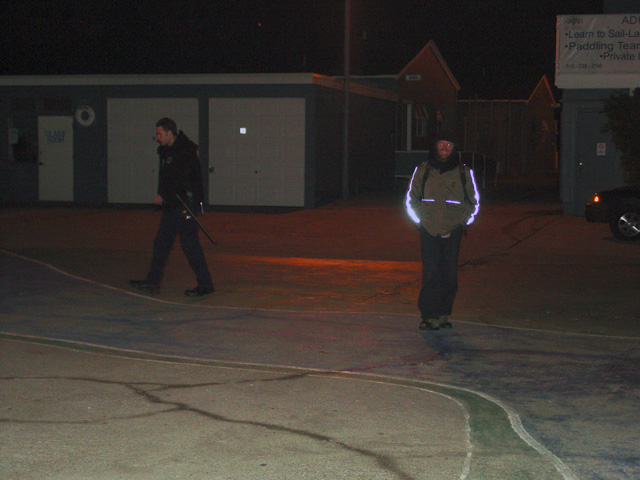 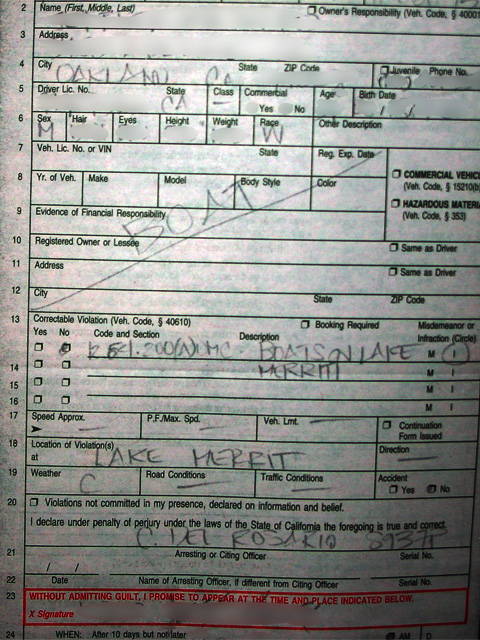 A. Boat Permit. It is unlawful for any person to launch, use, moor or store upon Lake Merritt any private boat unless there shall have first been procured for said boat a permit from the Recreation Commission for such purpose. Said Commission may, by rule, specify the conditions under which the same may be granted, suspended, or revoked.

B. Speed of Boats. Speed of mechanically propelled boats on Lake Merritt is limited to eight miles an hour unless special permission to exceed such limit is granted by the Board of Playground Directors.

C. Boats in Certain Areas. It is unlawful for any person between the first day of October and the last day of April next succeeding, to row, drive, propel or navigate any boat in, over, or upon any part of the following described area of Lake Merritt:

That portion of the northeastern arm of Lake Merritt that lies northeasterly of a line bearing north 38° 13′ west from a point on the eastern line of Lakeshore Boulevard, distant thereon one hundred and sixty (160) feet southerly from the production of the entire line of that portion of Hanover Avenue that lies between Wayne and Newton Avenues.

This subsection shall not apply to the employees of the city properly engaged in work for said city in or upon the above described area and authorized by the Board of Playground Directors or the Board of Park Directors to be thereon. 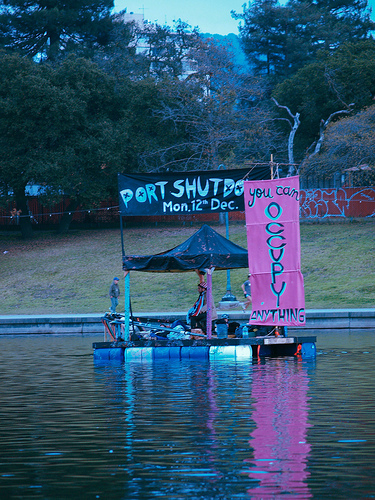