Add an Event
Newswire
Calendar
Features
Home
Donate
From the Open-Publishing Calendar
From the Open-Publishing Newswire
Indybay Feature
Publish to Newswire
Add an Event
Related Categories: Santa Cruz Indymedia | Environment & Forest Defense
Bicycle Wars: Cycling advocates seek control of Santa Cruz County Sierra Club
by SC Environment News
Sunday Dec 18th, 2011 2:43 PM
On December 8th, the California Coastal Commission voted 10-1 to approve the controversial $5 million Arana Gulch Master Plan. The vote was expected to resolve a fifteen year long battle between cycling advocacy groups and environmental groups that oppose the plan. But in a move that has some long time Sierra Club members crying foul, cycling advocacy groups are running a slate of three candidates for the board of the Santa Cruz County Group of the Sierra Club in the December election. This would be the second cyclist-sponsored candidate slate in two years, and is expected to decide control of the Santa Cruz Group Executive Committee. 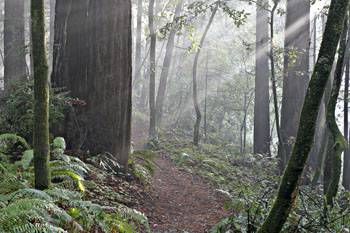 The candidates have no prior history of volunteering for the Sierra Club, but do have extensive ties to local cycling advocacy groups. Tawn Kennedy is coordinator of Green Ways to School, a K-12 education project that is funded by a grant through People Power and the Hub for Sustainable Transportation. Greg McPheeters is the immediate past Chair of the Silicon Valley Bicycle Coalition, and Mary Odegaard joined People Power in advocating for the King Street bike boulevard. The trio are attempting to unseat the current Santa Cruz Group Executive Committee Chair, Kevin Collins, a long time Sierra Club forestry activist, as well as the Forestry Committee Chair, Dennis Davie, and the Secretary / Treasurer, Mark Sullivan, a local environmental attorney.

A mailer to Sierra Club members touts the experience of Kennedy, McPheeters, and Odegaard in youth outreach, solar energy, and organic farming. But long time Sierra Club activists are concerned about the lack of experience in core Sierra Club conservation activities, which they feel are essential to the Sierra Club mission. The Sierra Club has been active for half a century in Santa Cruz County on forest and watershed conservation, native species protection, coastal advocacy, and zoning and land use, as well as evaluating public and private projects for conformance to local, state, and national environmental laws. The Executive Committee Chair, Kevin Collins, explains that the Sierra Club is one of the few local environmental organizations that does not receive money from City or County and so is free to take positions on politically charged land use and development issues.

That very independence may have put the Santa Cruz County Group at risk when it joined the Center for Biological Diversity and the California Native Plant Society in opposing the construction of the multi-use path in Arana Gulch. The Arana Gulch project has been supported by a large and well funded local coalition including city council members, County Supervisors, and the county Regional Transportation Commission as well as People Power, Mountain Bikers of Santa Cruz County, and the Santa Cruz County Cycling Club. The coalition sent out emails widely to gather over 700 signatures in support of the plan. The signers of the petition have been asked to vote in the Sierra Club election so that the Santa Cruz Group of the Sierra Club cannot continue to obstruct implementation of the Arana Gulch Master plan.

Cycling advocates state that they are Sierra Club members, and are simply seeking a Sierra Club that is more responsive to local members. But long time Sierra Club activists been concerned about the number of new members from the coalition that have joined in this and the previous year’s contested elections. Last year, the chairs of the Santa Cruz County Cycling Club and Mountain Bikers of Santa Cruz County joined, as well as many members of the two cycling groups.

Representatives from People Power have been continuously present at Sierra Club Executive Committee meetings over the past year, sometimes joined by Mountain Bikers of Santa Cruz County, who are advocating for paved bicycle trails through the Pogonip. Long time Sierra Club Executive Committee members fear that the cycling coalition is also seeking to overturn the Club’s opposition to new pavement in the Pogonip, and even in the Forest of Nisene Marks, which was subject to legal settlement in 2005. “We support bicycles as alternative transportation,” explains Executive Committee Chair Kevin Collins, “but the Sierra Club has a long-standing opposition to paved roads in wilderness areas.”

Cycling advocates maintain that they are simply trying to refocus the Club on broader issues, including climate change, reducing greenhouse gas emissions, and sustainability. Long time Sierra Club members fear that the dominance of representatives from single-issue advocacy groups could mean not only loss of identity, but the end of the strongest independent voice for conservation in Santa Cruz County.
§Mountain bikers want natural surface trails
by Mark Davidson Monday Dec 19th, 2011 8:48 AM
"Mountain Bikers of Santa Cruz County, who are advocating for paved bicycle trails through the Pogonip."

This is a misrepresentation of the Pogonip multi-use trial issue. Proposing a paved trail through the Pogonip has never come up for consideration and never will. The propagation of this piece of misinformation - which has been spread by the opponents of this trail - must be stopped. Please issue a correction. Mountain bikers do not advocate for paved trails. Period. We enjoy natural surface trails.

The trail plan and environmental review published by the Parks Department will give you all the required information on this project. http://www.mbosc.org/local-parks/pogonip/petition/
http://mbosc.org
§Article correction -- Pogonip project / Sierra Club
by SC Environment News Friday Dec 23rd, 2011 1:13 PM
The paragraph on the Pogonip trails should read

Representatives from People Power have been continuously present at Sierra Club Executive Committee meetings over the past year, sometimes joined by Mountain Bikers of Santa Cruz County, who are advocating for a new multi-use trail through the Pogonip. Long time Sierra Club Executive Committee members fear that the cycling coalition is also seeking to overturn the Club’s opposition to new cycling trails in the Pogonip, and even in the Forest of Nisene Marks, which was subject to legal settlement in 2005. “We support bicycles as alternative transportation,” explains Executive Committee Chair Kevin Collins, “but the Sierra Club has a long-standing opposition to projects that increase traffic in particularly sensitive habitat areas.”
Add Your Comments
LATEST COMMENTS ABOUT THIS ARTICLE
Listed below are the latest comments about this post.
These comments are submitted anonymously by website visitors.