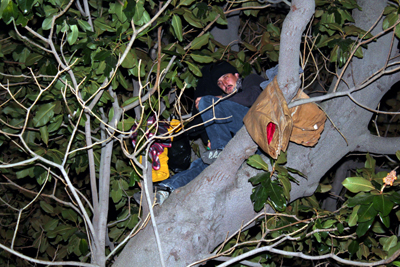 Steven Joseph Carter, the tree sitter at Cesar Chavez Park who spent parts of three days in a tree in solidarity with Occupy Sacramento, was released from jail on Tuesday, December 13 on his own recognizance.

The protester spent five days in Sacramento County Jail after his arrest, the longest any of the activists arrested by police has been jailed in the city of Sacramento's campaign against Occupy Sacramento and the First Amendment.

On Human Rights Day, December 10, Occupy Sacramento activists marched on the jail to demand the freedom of Carter and to protest the police brutality, violence and abuses that occur at the facility daily.

Carter, who was held on $16,000 bail since last Friday, is being charged with misdemeanor counts of curfew and "impeding an arrest." The charges carry up to 18 months in jail, according to Occupy Sacramento Legal Committee coordinator Cres Vellucci.

He is being represented by the Public Defender office. His next court date is February 29, 2012.

"In total now, after 24 arrests last week, there have been 111 arrests at the Park. None have been successfully prosecuted," emphasized Vellucci. "The City Monday dismissed charges against nine people who were supposed to go to trial Tuesday."

"We have said all along, and our lawyers have argued, that this local ordinance that proclaims the Bill of Rights only relevant before 11 p.m. weeknights or midnight on weekends is unconstitutional," said Vellucci. "We think the City of Sacramento knows that and does not want to see it challenged in a court of law."

The crackdown on the First Amendment by the cities of Sacramento, Oakland, Los Angeles, San Francisco and others across the country is apparently part of a nationally coordinated campaign by the Department of Homeland Security and other federal law enforcement agencies in collaboration with local police departments, as exposed by author Naomi Wolf in her November 25 article in the UK Guardian (http://www.guardian.co.uk/commentisfree/cifamerica/2011/nov/25/shocking-truth-about-crackdown-occupy),

"So, when you connect the dots, properly understood, what happened this week is the first battle in a civil war; a civil war in which, for now, only one side is choosing violence," wrote Wolf. "It is a battle in which members of Congress, with the collusion of the American president, sent violent, organised suppression against the people they are supposed to represent."

The ultimate irony is that while the City of Sacramento and the "leadership" of other cities across the country continue to wage their war against the Occupy movement, the First Amendment and Bill of Rights, the Wall Street criminals continue to profit off their bailouts by the Obama and Bush regimes after having violated a plethora of state and federal laws.

In this unjust oligarchy, defenders of the Constitution are arrested and brutalized for standing up for the law while the real criminals not only go free, but are rewarded for their criminal behavior. The police agencies are effectively serving as the private security forces for the Wall Street banksters who should be locked up in federal prison.