City of Fresno sends Holiday Greetings to the Homeless

by Mike Rhodes (editor [at] fresnoalliance.com)
The photo (directly) below shows the destruction of one of the homes in the Monterey Bridge homeless encampment. The home was owned by Mother Nature - you can see a photo of her (further below) and her reaction to the destruction of her shelter. She kept crying “That’s my home, that is my home.” 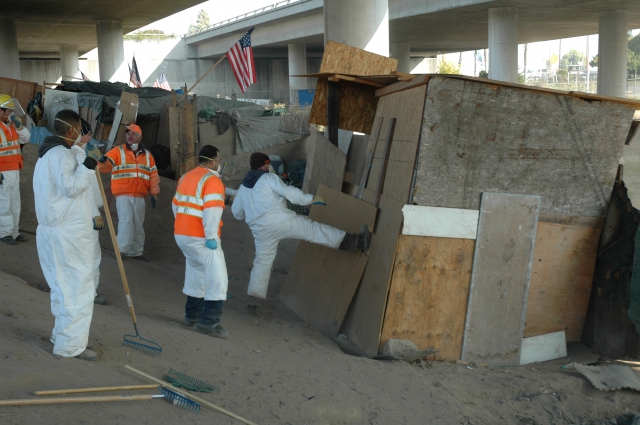 The City of Fresno continued to hammer away at the homeless, destroying more modest shelters, this time on the Monterey bridge. The attack on this encampment is part of a campaign that started about six weeks ago and represents a significant shift in city policy that no longer permits the homeless to live on public property in shelter of any kind. Fresno Police officers are now vigorously enforcing rules that do not allow homeless people to even sleep on sidewalks.

On Santa Clara street, near the Poverello House (a homeless center), homeless people told me that the police come through almost every night, wake them up, and tell them to move on. While I was there on Monday night, interviewing homeless people about this situation, a patrol car pulled up and announced over their loudspeaker that camping is not permitted. The announcement went on to say that “violators will be subject to arrest.”

The people in the area that were evicted by city workers from their tents and shelters are now sleeping on the sidewalk, many of them in front of homes that are vacant near Santa Clara and E street. Those boarded up houses sit less than 5 feet from where people are bundled up in their blankets and sleeping bags, being threatened by the police with arrest.

On Thursday (December 8), at the Monterey Bridge, city workers smashed apart the homes of a dozen homeless people. Mother Nature was one of the people who watched in horror as the city destroyed the home that kept her warm at night. “That’s my home, that is my home,” she wailed as a group of sanitation workers kicked her home down (see photos below).

The City of Fresno says they are destroying the encampments because there are construction projects in the area that require there removal. Greg Barfield, who is the Homeless Prevention and Policy Manager for the City of Fresno, says that the city is finding housing for those affected by the destruction of the encampments. Yet, at an impromptu meeting of the people being evicted yesterday, none of them indicated they had been offered housing.

On a live TV show last night, Barfield was asked why the homeless were being evicted now, just as the weather is getting cold. He responded that “no time is a good time” to evict the homeless but argued that it was the right thing to do. The city also defended their policy of providing no safe and legal places for the homeless to live. Preston Prince, Exec. Dir. & C.E.O. of the Fresno Housing Authority, said that he does not support the concept of safe and legal campgrounds. Both Prince and Barfield said they wanted to provide housing for the homeless and not encourage temporary encampments.

Other panelists on the KNXT (the Catholic TV station that hosted the event) argued passionately for the need for a short term solution for the homeless, because nobody is saying that the City of Fresno or the Housing Authority is going to find all homeless people housing any time soon. Chris Schneider, Executive Director, Central California Legal Services challenged Barfield to support the Safe Ground concept. Barfield refused to express support for safe and legal places for the homeless to live.

Kevin Hamilton, the Deputy Chief of Programs at Clinica Sierra Vista, said there are over 3,000 homeless people on the streets of Fresno and that while it is nice that city efforts have found housing for some of them, you can’t ignore the reality that people need a safe place to sleep at night. That point was repeated throughout the 1 ½ hour program by other panel members, the in-studio audience, and callers.

Bill Simon, chairperson of the Bishop John Steinbock Homeless Advocacy Committee, asked why the City of Fresno destroyed homeless people’s property, even though it was clearly marked with their names on it. He showed a video of a shelter being destroyed, even after he had told workers who it belonged to, that the owner was at school at the time, and that she wanted her property saved. The destruction of homeless people’s property appears to be in violation of a Federal Court Order, prohibiting the city from taking and immediately destroying their property. The court order directs the city to put any property of value in storage for at least 90 days, so the property can be reclaimed.

The destruction yesterday of homeless shelters on the Monterey bridge was reported on by The Fresno Bee, in which they claimed it was a cooperative endeavor entered into between the city and the homeless. You can read that report here: http://www.fresnobee.com/2011/12/08/2642417/fresno-homeless-camp-razed-ministry.html

The Bee report is an example of the contrast in how mainstream media reports on what is going on with the homeless, and alternative/independent media - like Indybay.

As reported in The Bee story, the ministry of Ray Polk was spared in the clean up. Polk is homeless and has a religious ministry in the same encampment that was destroyed yesterday. His ministry includes a Homeless Memorial honoring many of the people who have died on the streets of Fresno while homeless. The City of Fresno spared Polk’s Christian ministry, which now includes the only remaining homeless structures standing in Fresno.

A list of articles about homeless issues in Fresno, over the last 10 years, is available at: http://fresnoalliance.com/wordpress/?p=1313
END_OF_DOCUMENT_TOKEN_TO_BE_REPLACED
§Mother Nature
by Mike Rhodes 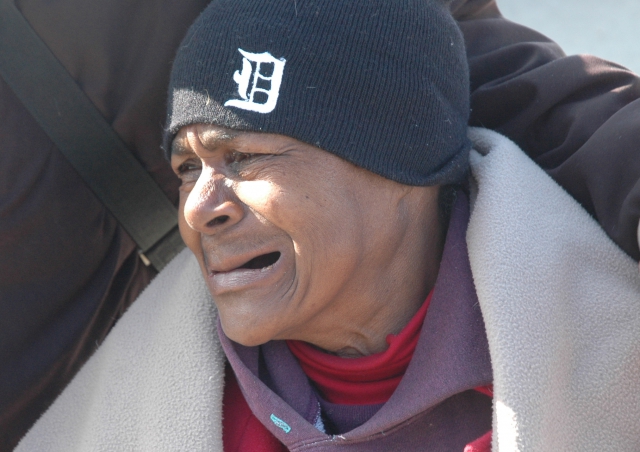 original image (2023x1431)
This is Mother Nature as she watched her home being kicked down.
END_OF_DOCUMENT_TOKEN_TO_BE_REPLACED
§Rose
by Mike Rhodes 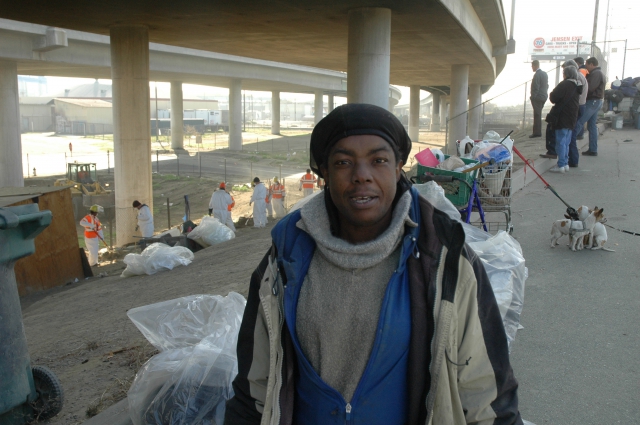 original image (3008x2000)
Rose was first evicted from the Santa Fe homeless encampment about 6 weeks ago. After being chased from one place to another by the police, she moved to the Monterey Bridge, where she has lived for the last couple of weeks. She now has to try and find a new place where she can sleep at night. It won’t be easy. . .
END_OF_DOCUMENT_TOKEN_TO_BE_REPLACED
§City Workers Evict Rose
by Mike Rhodes 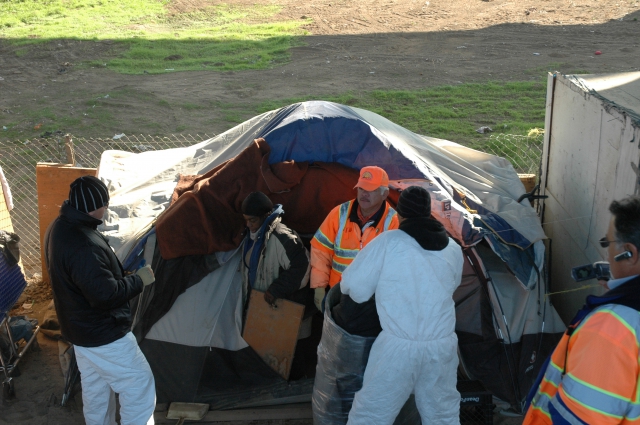 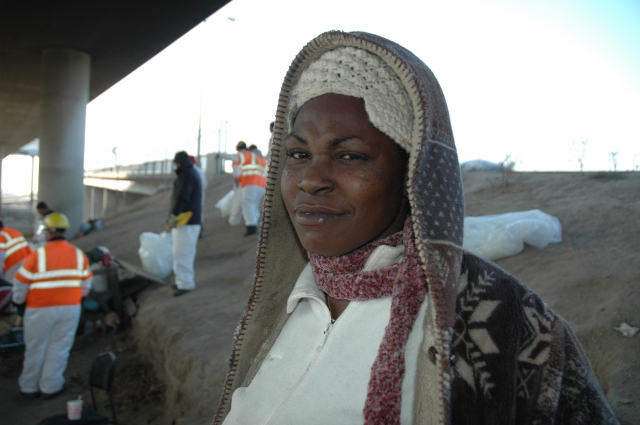 original image (3008x2000)
Yolanda was evicted by City of Fresno workers on Thursday. Where will she sleep tonight?
END_OF_DOCUMENT_TOKEN_TO_BE_REPLACED
§The Destruction Begins
by Mike Rhodes 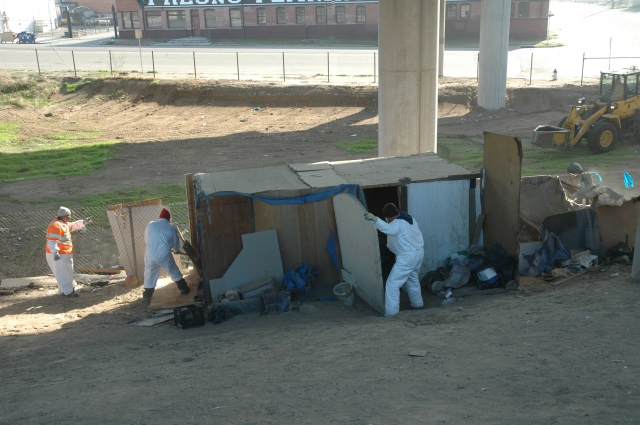 original image (3008x2000)
This photo shows how the City of Fresno sanitation workers start to dismantle the structures. 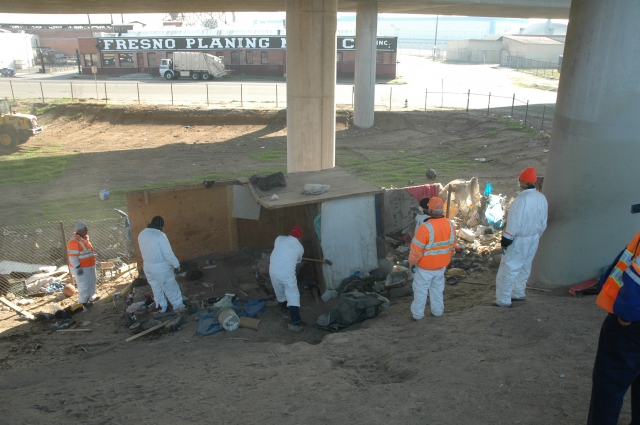 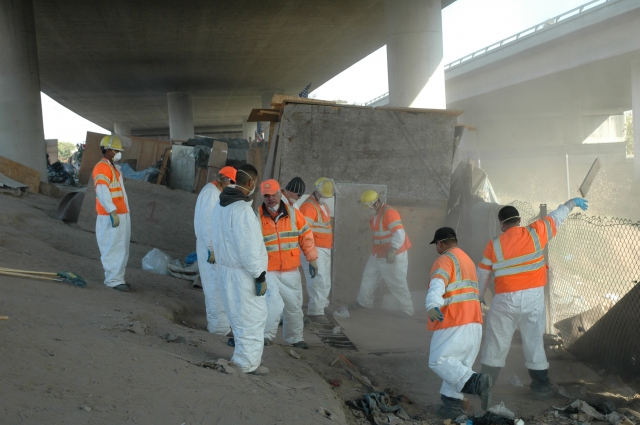 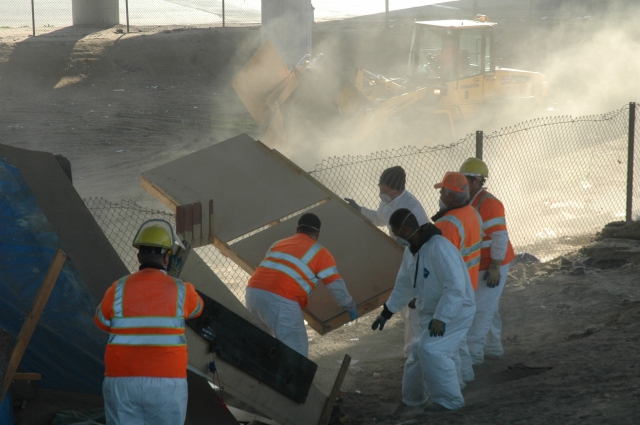 original image (3008x2000)
This photo shows city workers taking apart the encampment a piece at a time and throwing those pieces over the fence so the bulldozer will pick them up and put them into a garbage truck, which then crushes them and takes them to the dump.
END_OF_DOCUMENT_TOKEN_TO_BE_REPLACED
§Garbage Truck and Bulldozer
by Mike Rhodes 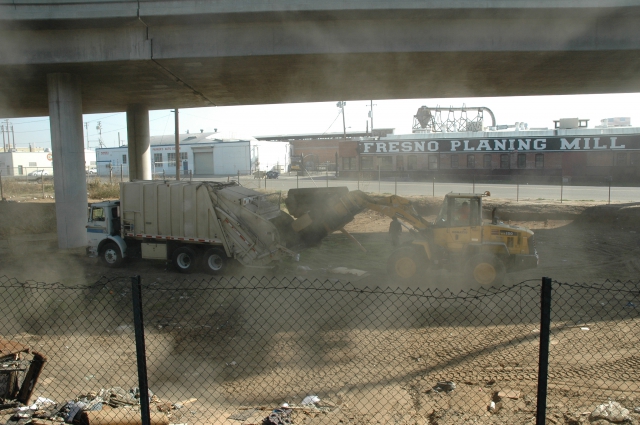 original image (3008x2000)
This shows the bulldozer putting a couch into the waiting garbage truck.
END_OF_DOCUMENT_TOKEN_TO_BE_REPLACED
§On G street near the Rescue Mission
by Mike Rhodes 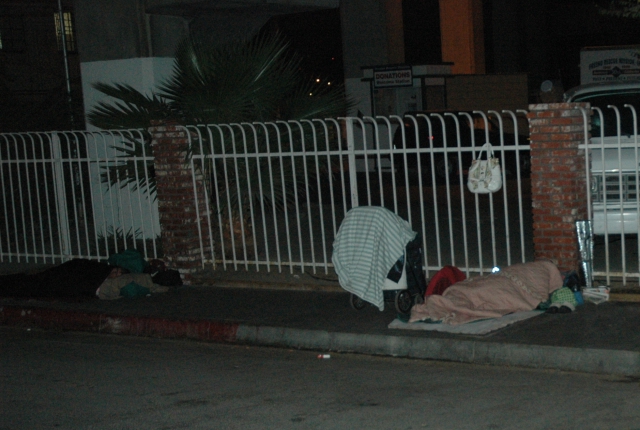 original image (1878x1263)
Because of the new City of Fresno policy, homeless people have nowhere to sleep. They are even harassed by the police when they sleep on the sidewalk.
END_OF_DOCUMENT_TOKEN_TO_BE_REPLACED
§Santa Clara near E street
by Mike Rhodes 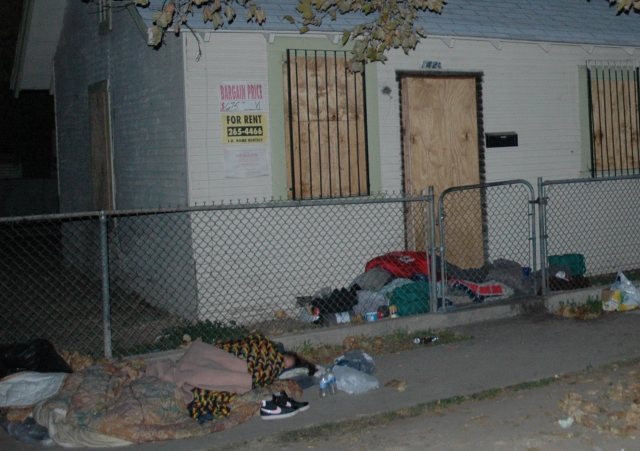 original image (1688x1191)
Homeless people sleep on the sidewalk, even though there is an empty house 5 feet away.
END_OF_DOCUMENT_TOKEN_TO_BE_REPLACED
Add Your Comments
Comments (Hide Comments)
§Citizen
by Dianne Hanzlicek
Where are these people to go? The homeless czar, the city council and mayor are responsible for displacing people at our coldest time of the year with not enough housing for them. In this economy, in this area of poverty we need to do better. Shame on the city of Fresno.
Add a Comment
§Incredible article
by Ann
How is it that the city can treat the homeless this way and it is not illegal? I hope the lawyers can being the civil law suits soon so the money can help the homeless. But what I really wish is that the CA Attorney General could charge the Mayor, and other officials with neglect. They are just slowly killing these people.
Add a Comment
Support Independent Media
We are 100% volunteer and depend on your participation to sustain our efforts!