Add an Event
Newswire
Calendar
Features
Home
Donate
From the Open-Publishing Calendar
From the Open-Publishing Newswire
Indybay Feature
Publish to Newswire
Add an Event
Related Categories: Santa Cruz Indymedia | Environment & Forest Defense
Final Battle in 15 Year Long Arana Gulch Saga?
by SC Environment News
Tuesday Dec 6th, 2011 4:30 PM
A long simmering battle over a proposed bicycle path through the Arana Gulch Greenbelt in Santa Cruz is being brought to a head at a hearing of the California Coastal Commission in San Francisco on December 8th. On one side are local cycling advocacy groups, including People Power, the Santa Cruz Cycling Club, and Mountain Bikers of Santa Cruz. On the other side are open space advocates, including Friends of Arana Gulch, and local environmental groups, including the Sierra Club and the California Native Plant Society. 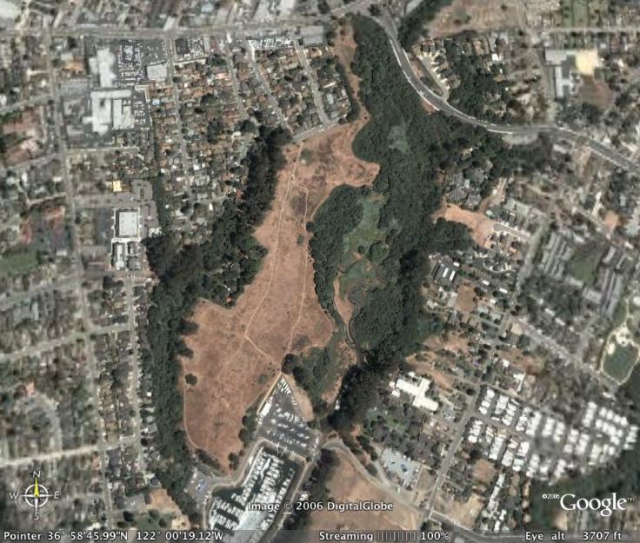 original image (736x625)
The bicycle path through the greenbelt was originally planned by the City of Santa Cruz Planning Department in 1996, shortly after the purchase of the greenbelt. City council members felt that the path could be completed in two or three years, whereas the Rail Trail, preferred by environmental groups, would take over a decade to purchase.

The proposed bicycle route quickly ran into environmental issues. It turned out that the 63-acre greenbelt area was a rare remnant of coastal prarie, and contained the Santa Cruz tarplant, an annual wildflower in the sunflower family, that had been extirpated in the San Francisco Bay Area. Grey Hayes, a local botanist who had been studying the tarplant, strongly opposed the proposed development because of the impact on the seedbed. In January 2000, Coastal Commission staff recommended that the city complete the master plan for the greenbelt first, and then come back with a specific project.

In 2006, the California Native Plant Society and Friends of Arana Gulch filed a lawsuit against the master plan, citing the lack of consideration of alternatives in the Master Plan EIR. The district court decided against the lawsuit in 2007, and the appellate court in 2009. The city moved quickly to find the remaining funding needed to start construction of the $5 million project.

In January 2010, the County Regional Transportation Commission moved to commit $1.1 million to the project, ignoring warnings that the plan had yet to receive approval from the California Coastal Commission. The warning proved to be well founded. The Coastal Commission failed to approve the master plan for Arana Gulch at a meeting in March 2010, and again in October 2010. This did not deter Santa Cruz County Supervisors John Leopold and Neil Coonerty from pushing to commit another $1 million in County redevelopment funds to the project.

The city has revised the master plan somewhat to include fences around tarplant habitat, that would also allow introduction of grazing animals, which would help reduce non-native grasses that are crowding out native plants, including the tarplant. Proponents cite the plan’s improvements.

Friends of Arana Gulch continues to oppose the construction of an eight foot wide path with two foot shoulders through environmentally sensitive habitat area. The Sierra Club also cites disturbance from constructing a 400 foot bridge across Hagemann Gulch and an earthen ramp over Arana Creek. Opponents say they would prefer that the $5 million in county transportation funds be spent instead on the newly purchased Rail Trail, which runs only a quarter of a mile from the proposed Arana Gulch path. The Rail Trail, which currently has no funding, will eventually be part of the Monterey Bay Sanctuary Scenic Trail.

The plan is coming before the Coastal Commission again on Thursday, December 8 for a vote, and both sides are girding for battle. Almost a thousand people have signed online petitions on one side or the other, not including paper signatures and letters and emails to the Coastal Committee. The cycling advocate's petition is at http://www.signon.org/sign/approve-the-arana-gulch/ and the Friends of Arana Gulch petition is at http://signon.org/sign/no-broadway-brommer-in

Information about the Coastal Commission hearing can be found online at http://www.coastal.ca.gov/mtgcurr.html