Photo of the Mokelumne River's Electra Run by Katherine Evatt. 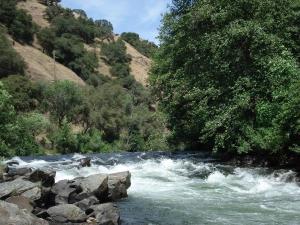 On Monday, December 5, the East Bay Municipal Utility District announced that the soon-to-be released revised draft environmental impact report for its long-range water plan recommends that the utility not include the controversial expansion of Pardee Reservoir.

The expansion would flood a free-flowing section of the Mokelumne River near Jackson, drowning the Middle Bar Reach and part of the Electra Run. Both river reaches are highly valued for their recreational, historic, and cultural significance.

The Foothill Conservancy and other Mokelumne River advocates are delighted by the news. “It’s a wise decision that everyone should feel good about,” said Foothill Conservancy Executive Director Chris Wright. “And it looks like a huge victory for the river. We have yet to see the EIR, but this announcement indicates that EBMUD agrees with us that there are better, less-destructive ways to meet its future water needs.

“The strong, unified community opposition in Amador and Calaveras made a real difference,” Wright said. “EBMUD claims it won’t do water projects without local community support, and it was clear that the Pardee expansion had virtually none.”

The expansion of Pardee Reservoir was included in the Water Supply Management Program 2040 approved by the EBMUD board in October 2009. The Conservancy, Friends of the River, and the California Sportfishing Protection Alliance promptly filed suit, claiming the huge water utility had violated the California Environmental Quality Act.

The Sacramento Superior Court agreed, and an April 2011 decision by Judge Timothy M. Frawley voided the water plan approval and sent EBMUD back to re-do certain aspects of the related EIR.

Among the key points of the court’s decision was that EBMUD had failed to look at a reasonable range of alternatives in its planning process. The court specifically pointed to the omission of the expansion of Los Vaqueros Reservoir in Contra Costa County. In today’s media release, EBMUD stated that “it may be possible to partner” with Contra Costa Water District in a future Los Vaqueros expansion.

“Of course, even if EBMUD follows through with this announcement, that doesn’t mean the Mokelumne is permanently protected,” Wright said. “We need to secure National Wild and Scenic River designation to make sure neither EBMUD nor any other agency can build new dams or diversions between Salt Springs Reservoir and Pardee."

“We hope this signals the beginning of a new partnership between EBMUD and our foothill communities, where we can focus on protecting and restoring the Mokelumne and its watershed, beginning with the Wild and Scenic designation. We look forward to working with East Bay MUD to maintain the water quality they need while we keep this important river flowing through our counties.”

For more information, contact Chris Wright at 209-295-4900 or chris @foothillconservancy.org.