Add an Event
Newswire
Calendar
Features
Home
Donate
From the Open-Publishing Calendar
From the Open-Publishing Newswire
Indybay Feature
Publish to Newswire
Add an Event
Related Categories: Santa Cruz Indymedia | Education & Student Activism
Students Occupy Hahn Student Services Building at UCSC
by Alex Darocy (alex [at] alexdarocy.com)
Tuesday Nov 29th, 2011 8:01 AM
After effectively shutting down and preventing employees from starting the workday at the Hahn Student Services building at UC Santa Cruz starting at 5am on November 28, students held a rally at Quarry Plaza at noon followed by a general assembly at 2pm. After some discussion of agenda items, students consensed on holding the remainder of the GA at the Hahn building where they could support those who were still maintaining the shutdown. At Hahn, it was consensed on that the building would be entered and occupied. 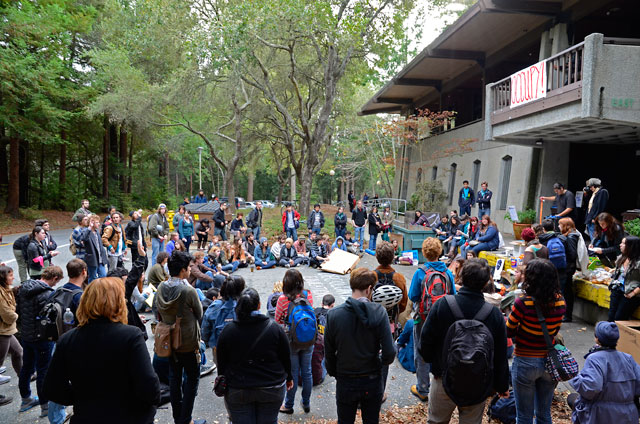 The occupation of the Hahn building began at about 4pm, and the general assembly was moved to the second floor balcony. Some students listened to the proceedings from inside of the offices. While occupying the building, students utilized conference rooms for working group meetings, and the restrooms were briefly re-identified as "gender neutral." The general assembly was to be reconvened at 7pm so that students could break into specific working groups. The main office cubicle area was eventually transformed into a study area that students used as the evening's general assembly stretched late into the evening. By 11pm, and 4 hours into the resumed GA, students had consensed on how to proceed if the police arrived and asked them to leave the building, and the group also consensed on the location of an encampment to be set up if they did leave Hahn. At 11pm students still had to decide if they would leave to that new encampment location immediately, or stay in Hahn overnight.

The day of actions at Hahn Student Services was held in solidarity with students who faced police brutality and repression of student free speech at UC Davis. Throughout the day, students maintained their three specific demands of the university:

1. Immediate resignation of Chancellor Katehi (of UC Davis)
2. All cops off the UC campus
3. No fee hikes 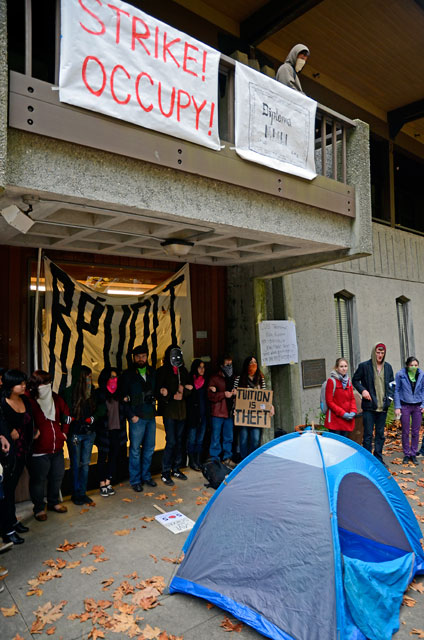 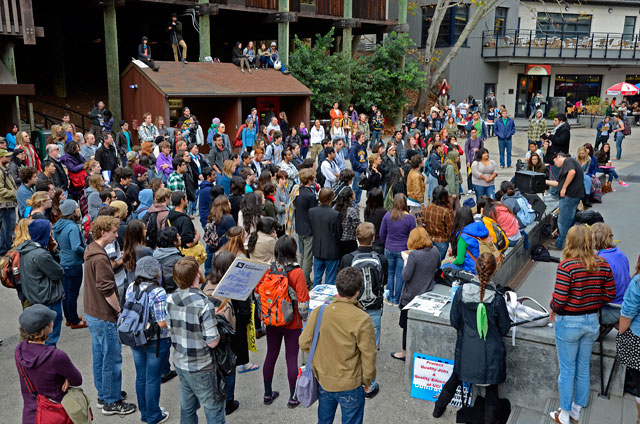 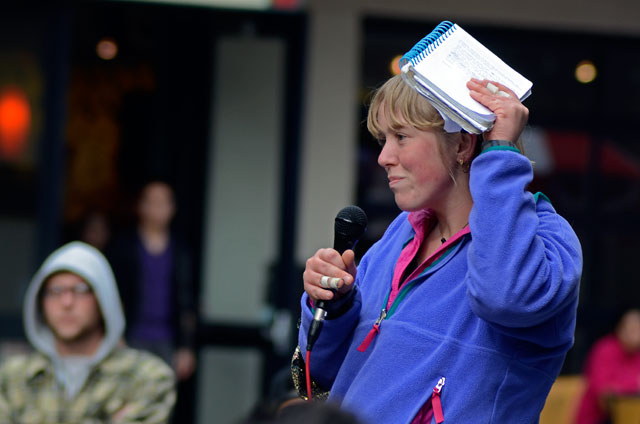 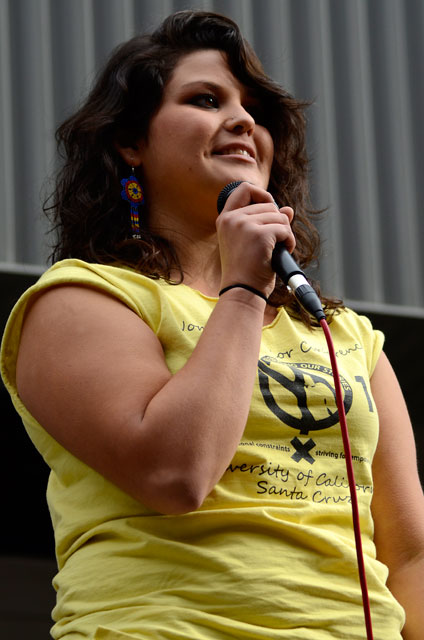 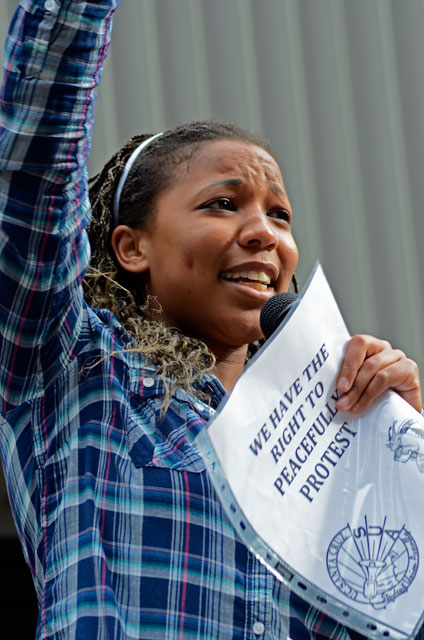 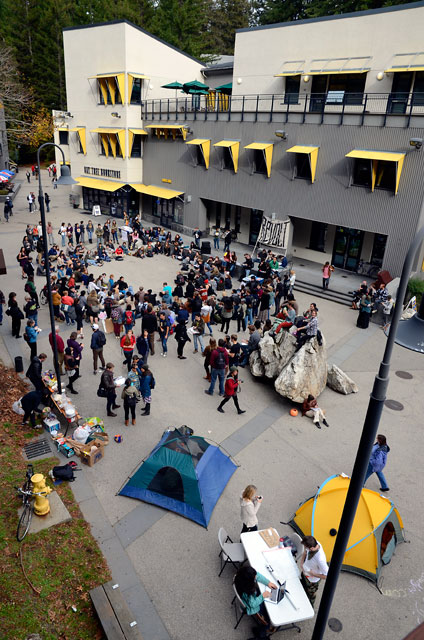 Students briefly set up tents during the general assembly at Quarry Plaza.
§
by Alex Darocy Tuesday Nov 29th, 2011 8:01 AM 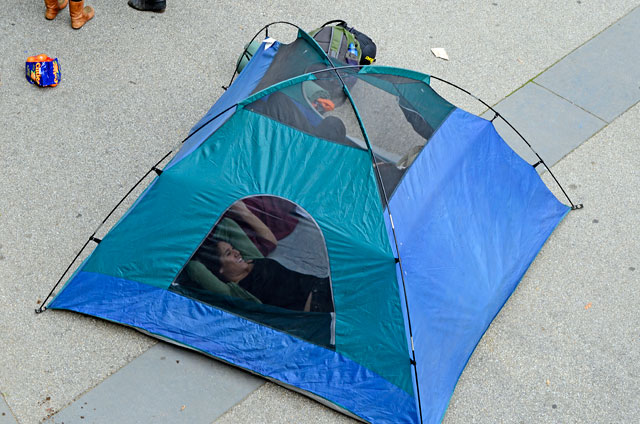 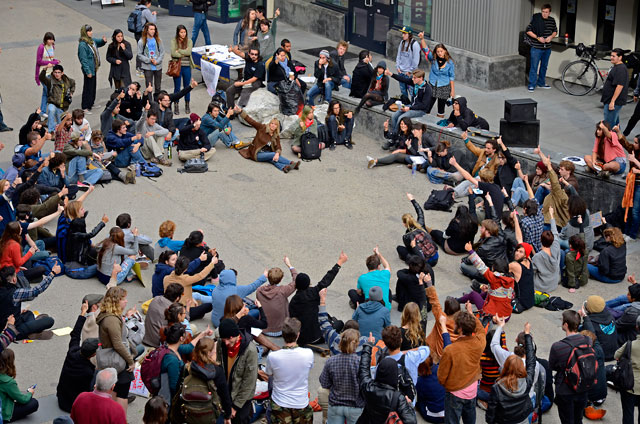 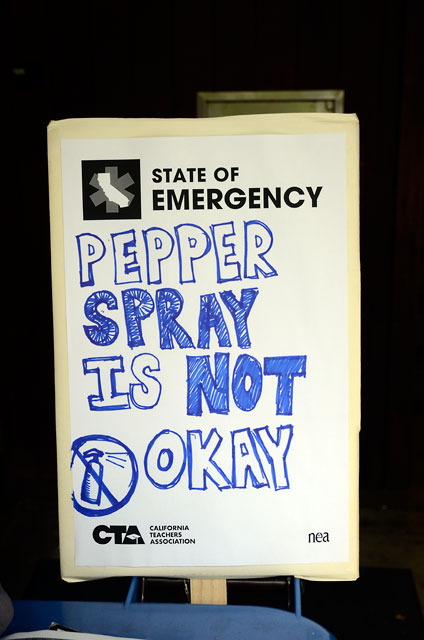 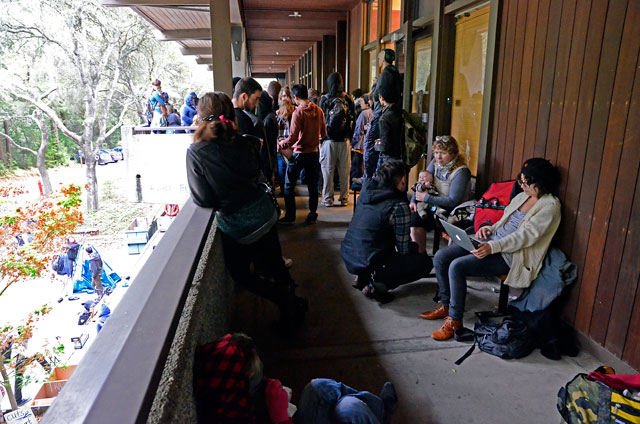 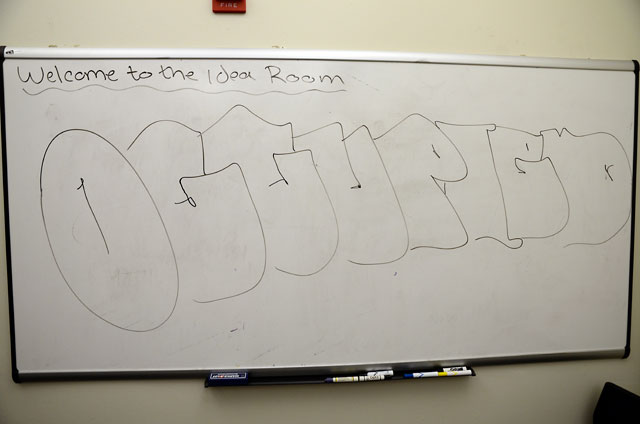 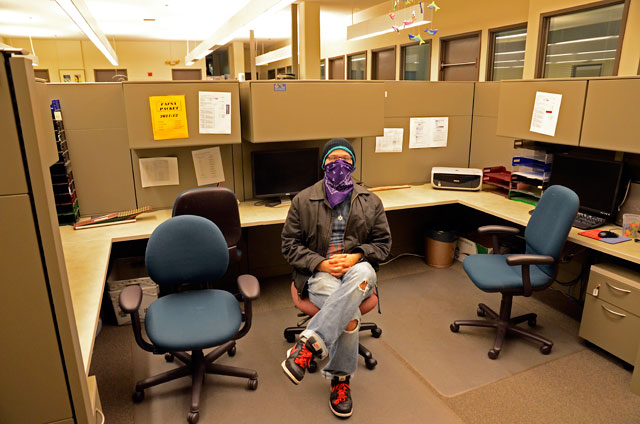 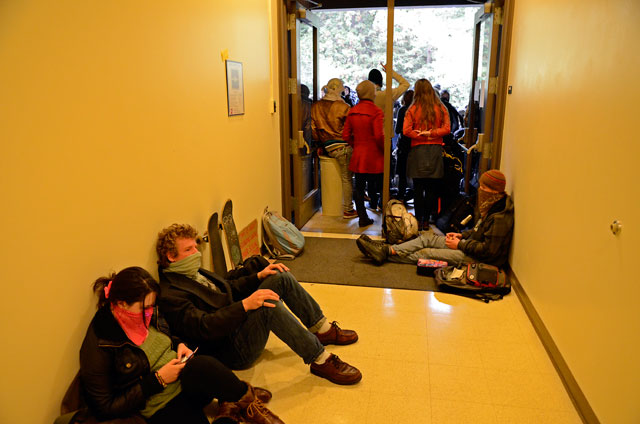 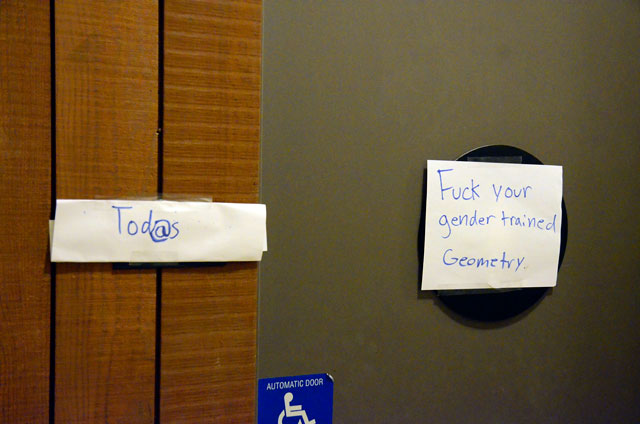 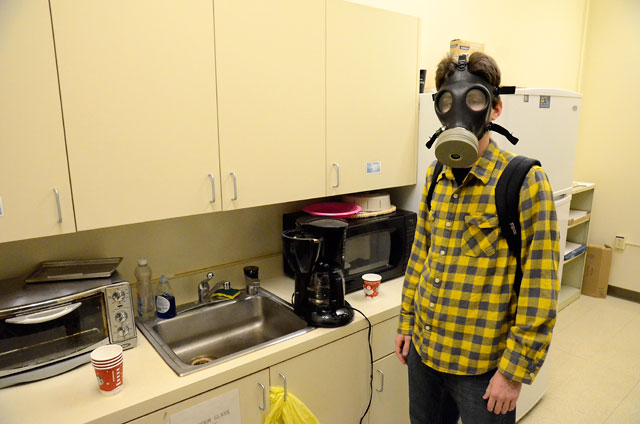 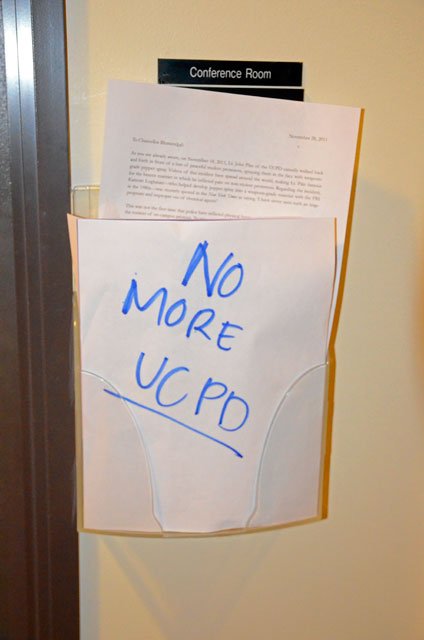 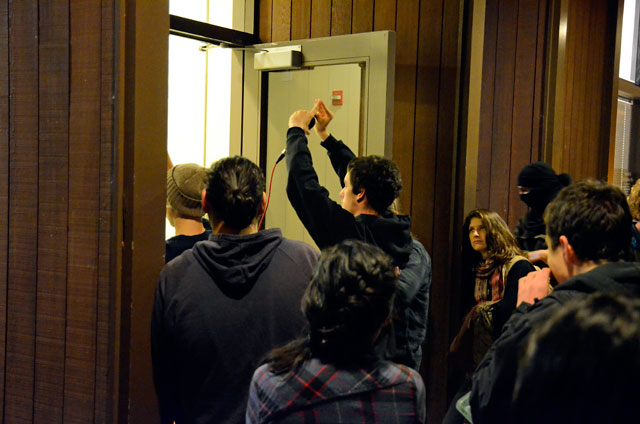 After 7pm, the general assembly was facilitated from outside of the building looking in.
§
by Alex Darocy Tuesday Nov 29th, 2011 8:01 AM 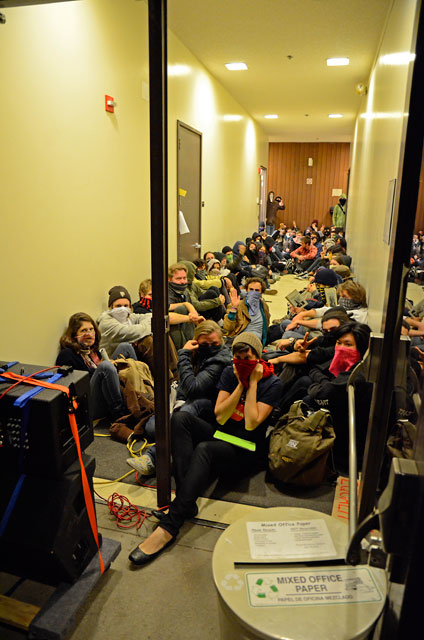 The final general assembly was held in the main hall of the second floor, and students consensed after some discussion on allowing members of the media to take one photo of the group.
§
by Alex Darocy Tuesday Nov 29th, 2011 8:01 AM 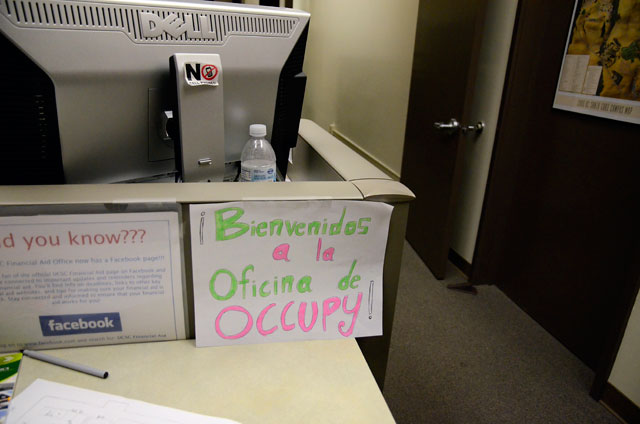