Add an Event
Newswire
Calendar
Features
Home
Donate
From the Open-Publishing Calendar
From the Open-Publishing Newswire
Indybay Feature
Publish to Newswire
Add an Event
Related Categories: East Bay | Anti-War | Global Justice & Anti-Capitalism | Police State & Prisons
Interview with Scott Olsen About His Injury from the Police Attack on Occupy Oakland: video
by Dave Id
Monday Nov 28th, 2011 12:24 AM
Twenty-four-year-old Iraq War veteran Scott Olsen joined with over one thousand others on the evening of October 25th to protest the pre-dawn police raid at Oscar Grant Plaza. As he stood wearing military fatigues alongside another veteran in a Navy uniform who he knew through Iraq Veterans Against the War, Scott Olsen was struck in his forehead by a police projectile fired from a distance of no more than twenty feet. Scott suffered a critical brain injury, remained in the hospital for weeks, and is still working to regain his full speech capabilities. Scott says that his thinking is clear but that he struggles to speak fluently. He currently awaits the results of an investigation into the incident being conducted by the Oakland Police Department, an investigation in which Scott himself has not yet been interviewed. There is no known investigation from Alameda County District Attorney Nancy O'Malley's office and Scott has not decided whether he will pursue civil action against Oakland authorities for his injury. Scott Olsen was interviewed in Oscar Grant Plaza on November 27th while a teach-in on reclaiming spaces was being held. [Video below] 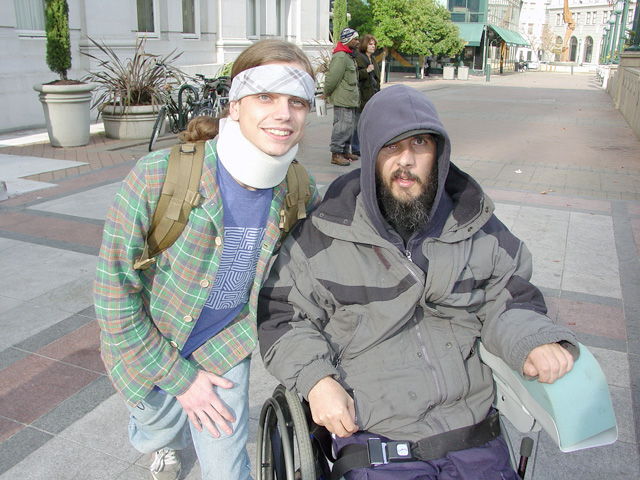 [Pictured above: Scott Olsen stands with Tristan Anderson. Tristan is currently suing the Israeli Defense Forces for a head injury he sustained in March 2009 when he was hit with a high-velocity tear gas canister fired by the military.]


Iraq Veterans Against the War
http://ivaw.org


For more recent updates on Occupy Oakland:
http://www.indybay.org/occupyoakland
§Video of Interview with Scott Olsen
by Dave Id Monday Nov 28th, 2011 12:24 AM
Copy the code below to embed this movie into a web page:
Download Video (57.5MB) | Embed Video
(video 9:35)

Indybay's copyright notice at the footer of every page includes this statement: Unless otherwise stated by the author, all content is free for non-commercial reuse, reprint, and rebroadcast, on the net and elsewhere. That means that it is NOT free for commercial reuse, including reposting original video to for-profit websites such as YouTube, broadcasting on commercial television stations, and so forth -- without permission. Indybay does provide embed code to share the video directly on any website, and a link back to this post can always be shared. 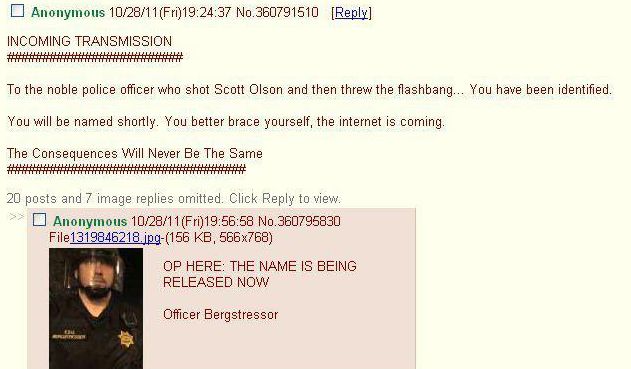 Website says it has "no way of knowing if Bergstresser is the officer responsible" as claimed by Anonymous.
http://dailybail.com/home/scott-bergstresser-anonymous-identifies-cop-who-shot-marine.html

censored news report on the incident at http://bsnorrell.blogspot.com/2011/10/video-who-shot-scott-olsen-at-occupy.html

video of Bergstresser at http://www.youtube.com/watch?v=YAWDzr0f3Ps
Add a Comment
§Fought For What?
by M0B33R
Thursday Dec 8th, 2011 8:45 AM
Sadly, more of this, plus much worse, is going to happen to good people. Even Democracy has a price-tag and it's been bought BIG-TIME. You fought in Iraq for OIL. And nothing else. This is a FACT. Saddam and WMDs were the diversion, the lies. You and all of your fellow soldiers were used so a few at the top made billions of $$$'s, while you all bleed, lost limbs, hearing, sight, were burnt, and died. When you go to express what you bled for, your democratic rights, you get beat and shot. Those are some really nasty Masters you all are listening too.
Add a Comment
Support Independent Media
We are 100% volunteer and depend on your participation to sustain our efforts!