Add an Event
Newswire
Calendar
Features
Home
Donate
From the Open-Publishing Calendar
From the Open-Publishing Newswire
Indybay Feature
Publish to Newswire
Add an Event
Related Categories: East Bay | Racial Justice
10th Annual Black Friday Demonstration to Protest Desecration of Sacred Ohlone Shellmounds
by Alex Darocy (alex [at] alexdarocy.com)
Sunday Nov 27th, 2011 3:10 AM
For the 10th straight year, community members gathered on Black Friday to protest the desecration of the sacred Ohlone shellmounds in Emeryville that were disturbed when the Bay Street Mall was constructed on top of them. The demonstration was on November 25 this year, and organizers of the event hoped to educate shoppers about the Ohlone burial sites, and that there were other shopping alternatives located nearby. 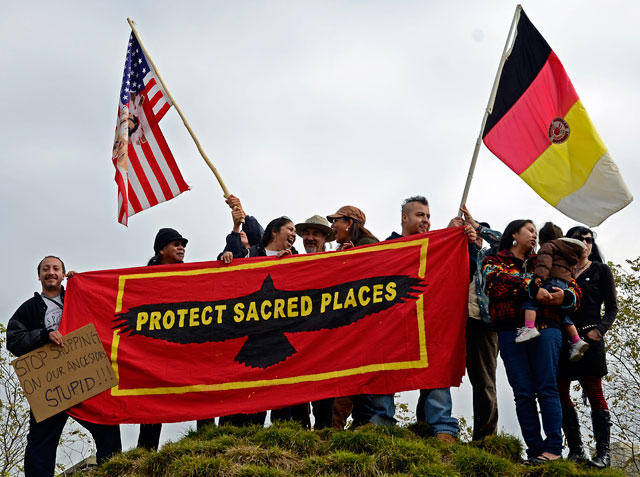 In 2000 the Bay Street Mall was built atop the largest and oldest Ohlone burial site in the Bay Area, amid protests. Before the desecration, the shellmounds at the location stood nearly as tall as the current structures. During construction, thousands of Ohlone ancestors were removed from the site, and hundreds were left in the ground and were eventually built on top of. The Victoria's Secret store on Bay Street sits atop burials that were not removed. Since the desecration, demonstrations at the site have been held every year on Black Friday.

A short rally during this year's demonstration featured speeches by Ohlone and Native American activists as well as a representative of Occupy/Decolonize Oakland. Native American community members also sang songs, drummed, and played clap sticks. A list containing the names of alternative chain store locations was handed out to shoppers in addition to other printed materials.

For information about shellmounds in the Bay Area, see:
http://ipocshellmoundwalk.intuitwebsites.com/shellmound.html 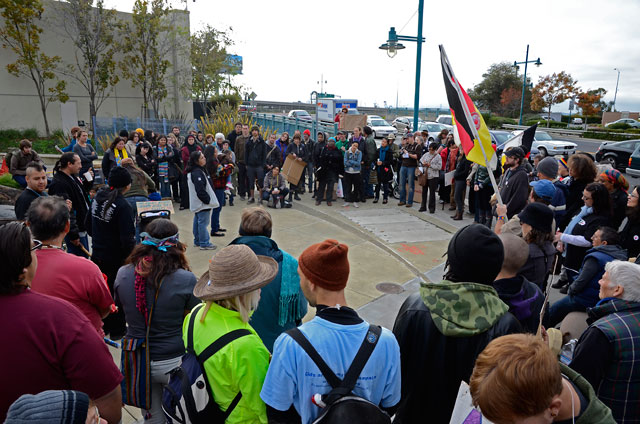 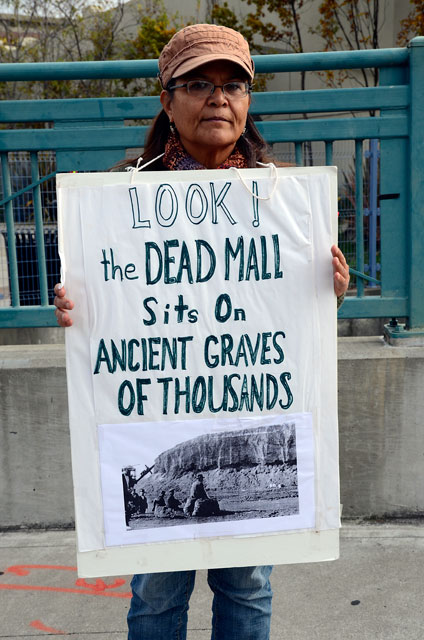 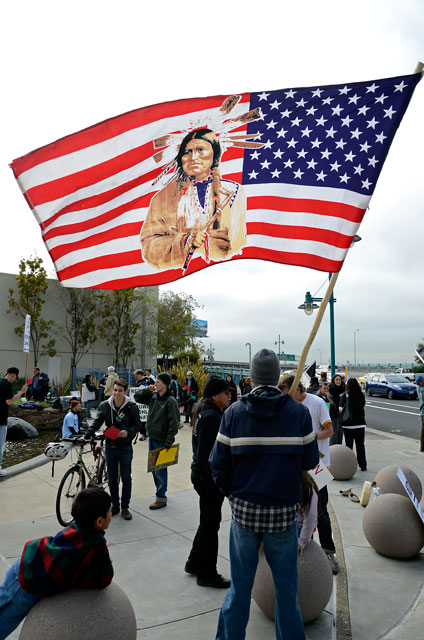 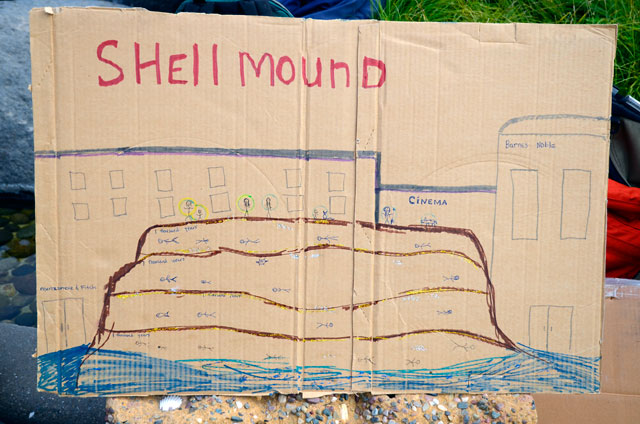 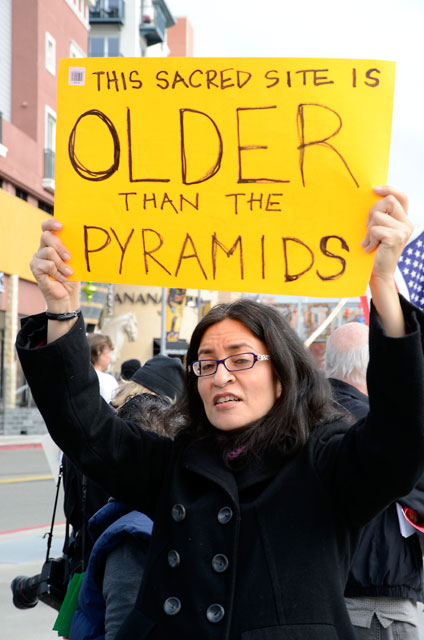 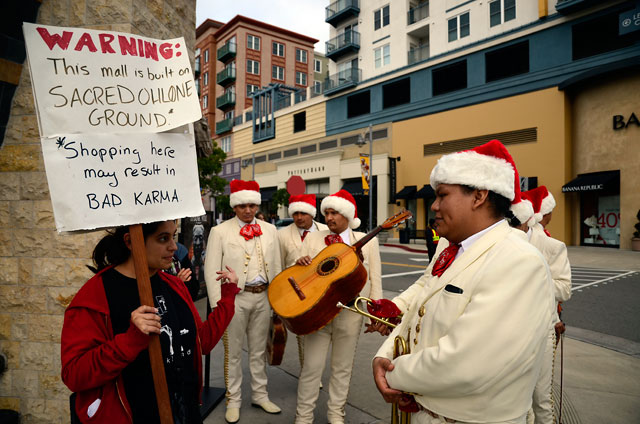 The musician on the right sympathizes with the cause.
§Corner of Ohlone Way and Bay Street
by Alex Darocy Sunday Nov 27th, 2011 3:10 AM 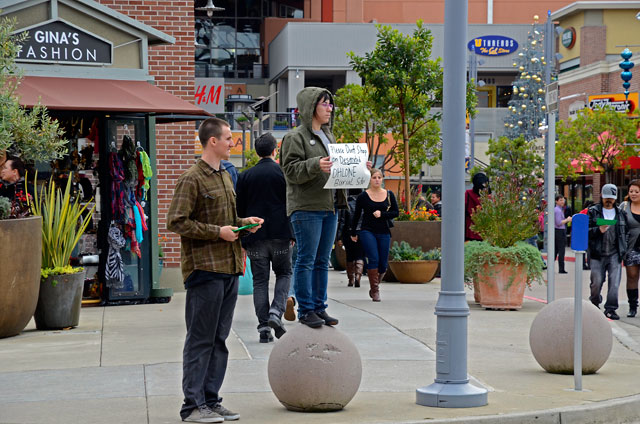 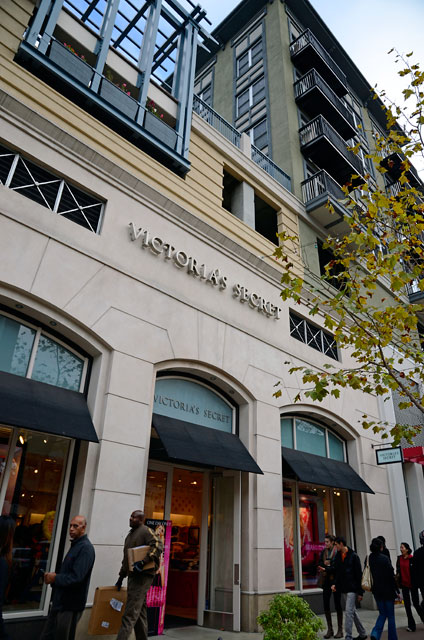 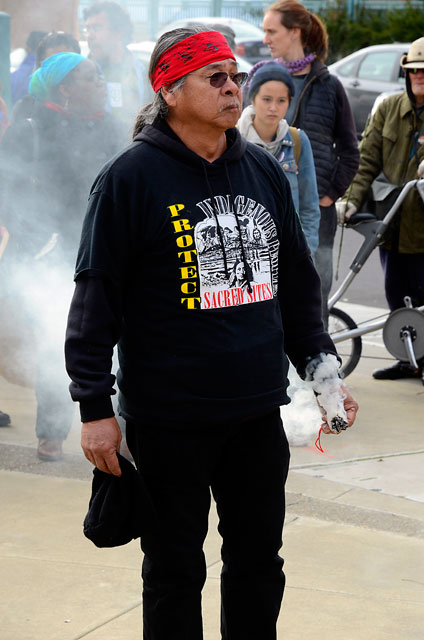 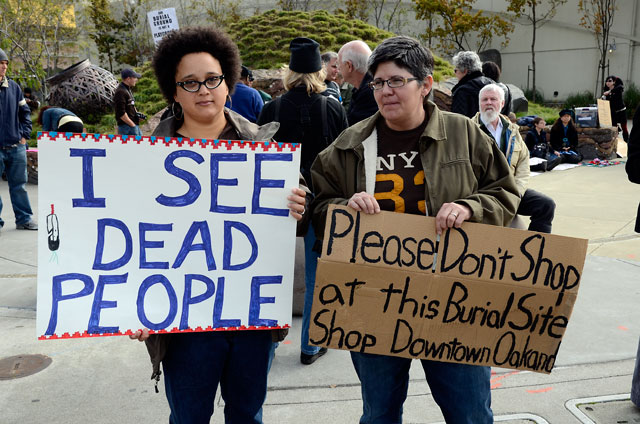 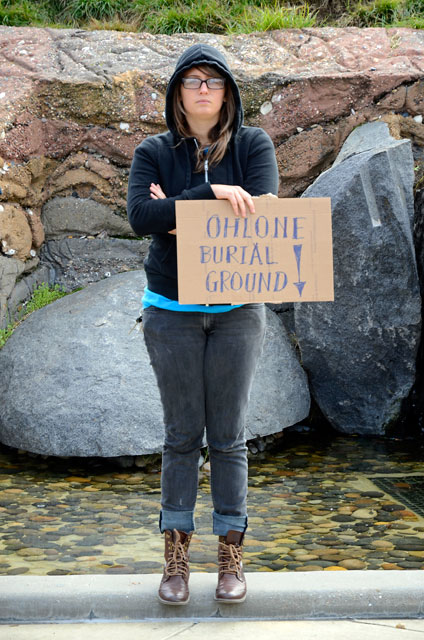 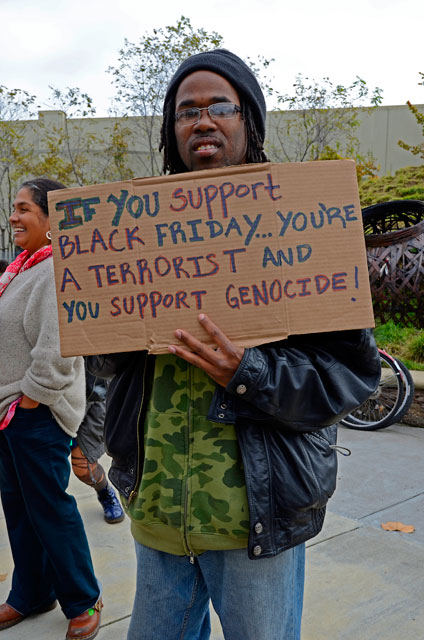 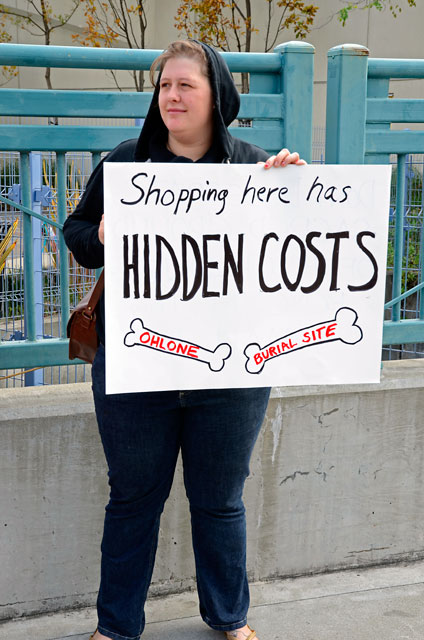 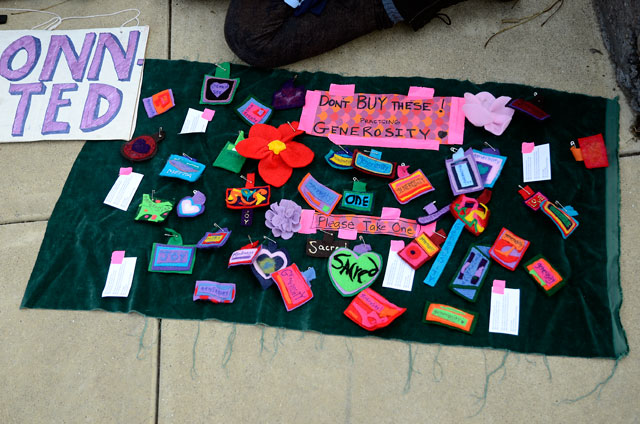 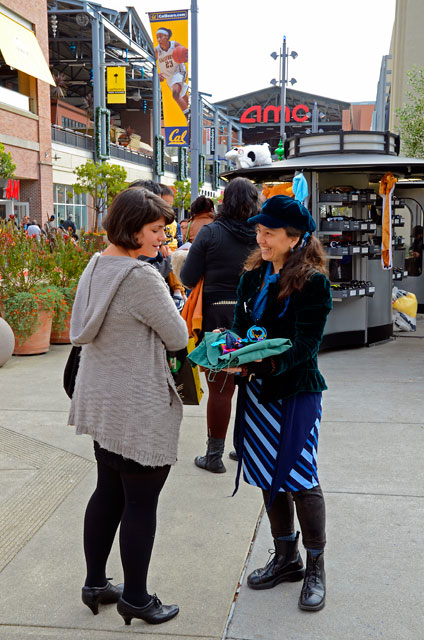 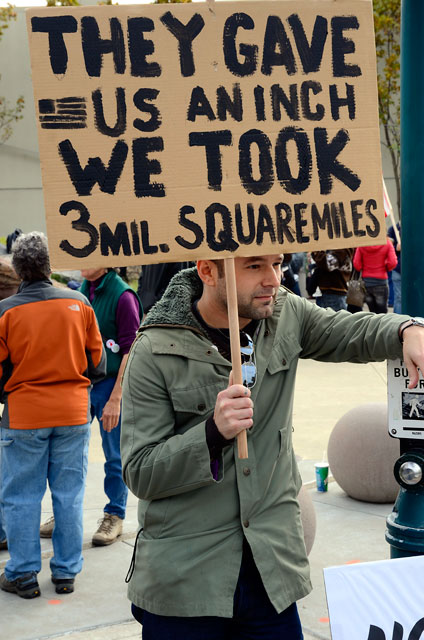 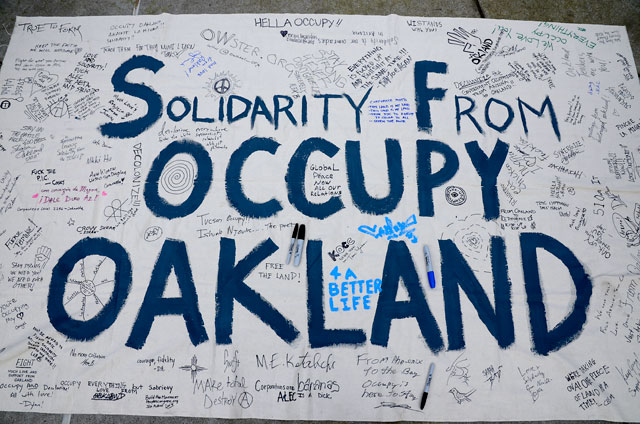 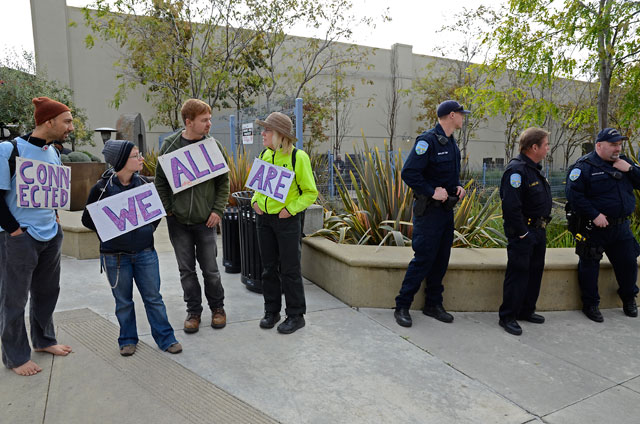 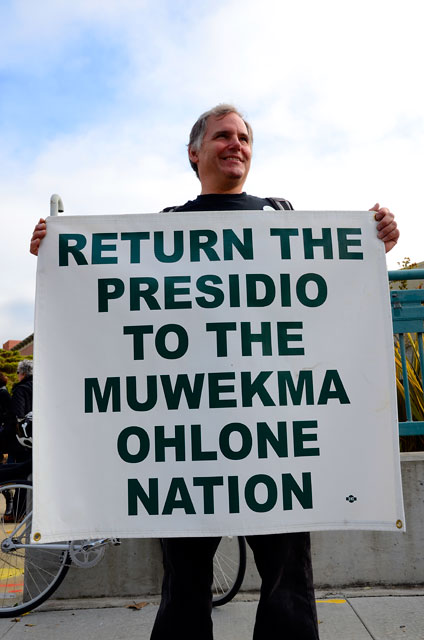 §Videos
by Alex Darocy (alex [at] alexdarocy.com) Sunday Nov 27th, 2011 12:34 PM
Singing and Drumming at Protest of the Desecration of Ohlone Shellmounds
http://www.youtube.com/watch?v=gShv3KqzQxc

Singing at Protest of the Desecration of Ohlone Shellmounds
http://www.youtube.com/watch?v=q1bhU65pWv0
Add Your Comments
Support Independent Media
We are 100% volunteer and depend on your participation to sustain our efforts!