Add an Event
Newswire
Calendar
Features
Home
Donate
From the Open-Publishing Calendar
From the Open-Publishing Newswire
Indybay Feature
Related Categories: East Bay | Education & Student Activism | Global Justice & Anti-Capitalism
Hella Hella Occupy!
by Malaika H Kambon (kambonrb [at] pacbell.net)
Thursday Nov 17th, 2011 10:31 AM
The Laney College WALKOUT on 2 November 2011 focuses on the power of the people and the strength within the community, as it fights for the control of its educational institutions, and against the growing racism, police brutality, I.C.E. laws, housing foreclosures, loss of work, medical care, and other signs that the global 1% care nothing for the needs and of the 99% from whom they steal. 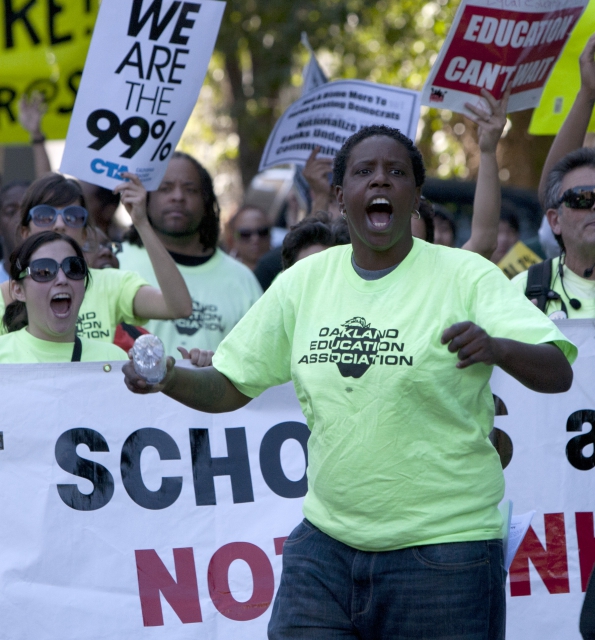 original image (2372x2548)
HELLA HELLA OCCUPY
The system is about to die
We bout to Hella Hella Occupy!

AQUI ESTAMOS
Aqui estamos y no nos vamos
Y si nos echan, nos regresamos
[Translation:]
We are here and we are not leaving
And if they make us leave we’ll return

From the Port of Oakland to Haiti, the whole world joined the Laney Jr. College WALKOUT in support of the Oakland General Strike as close to 500 people left Laney on 2 November 2011. The WALK-OUT first serve an Eviction Notice to the Oakland Unified School District on the steps of the OUSD office and then proceeded on to a convergence w/ citizens of the bay area in solidarity w/ Occupy Oakland.

As a 2-hour rally rocked the house, students, instructors, and parents from elementary schools, high schools, junior colleges and universities sent their representatives; peoples media photojournalists, videographers recorded this, one of the first steps from the hood in Oakland towards the organization of an indefinite general strike.

Everyone was here, at Laney, telling our story: from high and elementary school students and their instructors to college students; from as far away as the United Teachers of Richmond to Arise High School to Alameda Jr. College and UC Berkeley; from Labor Black & Brown to the Oakland Education Association; from Local 713 of the United Brotherhood of Carpenters to immigrants, the unemployed, underemployed, and the homeless: all converged on Laney’s Quad to call attention to problems in the hood, police attacks on our communities, the closure of our schools and libraries, the entombment of our political prisoners, the murder of our Loved Ones, by an economic system built upon the enslavement of AFRIKAN peoples, and the continued genocide wrought by imperialism’s wars, greed, corporate power, religion for profit, and the destruction of the very Earth upon which we stand.

And one of the WALKOUT members’ first and most important actions was to issue an EVICTION NOTICE to the Board Members of the Oakland Unified School District on the steps of the OUSD offices, which read:

“Parents, Teachers, Children and Community Members with Occupied Wall Street hereby make the following Notice of Eviction from Office for members of the Oakland Unified School district Board in the county of Alameda, California

This Notice is to inform you that your eviction of 800 elementary students from Lazear, Lakeview, Marshall, Santa Fe and Maxwell Park schools has caused great hardship for our children, our parents, teachers, school workers and communities.

Our children are overwhelmingly from low-income families, are overwhelmingly children of color and already suffer enough difficulties and uncertainty in their lives. Students and parents are very happy with our excellent schools, which you have voted to close.

We believe your actions are making the poor and working class children of Oakland pay for the budget shortfalls caused in turn by the 1% refusing to pay taxes.

We therefore put Board Members Jody London, Jumoke Hodge, Gary Yee, Chris Dobbins and David Kakishiba on notice that they WILL be evicted from office at the next election for carrying out the dirty work of the 1% and closing our great Oakland Schools.”

This eviction notice was read. Then it was presented to the resounding cheers of over 500 people, and the chagrin of OPD and the person [not the school superintendent…] who accepted the notice, and mumbled something about, ‘well it had to be done, we didn’t want to, but it had to be done.’

Obviously, this is the wrong response, 1%.

For at Laney Jr. College alone:

• 150+ classes are being cut next semester
• Tuition is rapidly increasing
• Good teachers are being laid off or are working overtime to support increasing class sizes.

Students are being told all over the country that their educational wants and desires come 2nd to the school’s administration/chancellor making money.

This system doesn’t want us empowered – it wants us enslaved. The ghosts of J. Edgar Hoover, Cristobal Colon, Napoleon, King Leopold of Belgium, Willie Lynch; of presidents and popes reach out from their graves in an attempt to make it so.

And it fears more than anything the hunger strikes of entombed men and women in prisons across the country willing to die for freedom rather than to live on their knees.

Imperialism will always fear a thinking people empowering our selves as opposed to an enslaved people under their thumb.

The organized and historic Laney Jr. College WALK OUT was a warning shot; a shield and a spear to put a decrepit and ancient evil on notice that the 99% are ‘sick and tired of being sick and tired’ of the vampirism of the 1% living off us.

If we want our needs to be addressed, we have to build the bridge to the platform that addresses them.

And the way to get a monster off your back is to stand up.

By the end of the day, the Laney Jr. College WALKOUT had participated w/ 100,000 people from all over the world to:

• Shut down Wells Fargo, Citi Bank, Chase, and Bank of America outlets;
• Shut down the Port of Oakland;
• Serve notice to the Oakland Unified School District that its governing board will be evicted from office for its eviction of 800 students from the closure of 5 of their schools.

ALL POWER TO THE PEOPLE 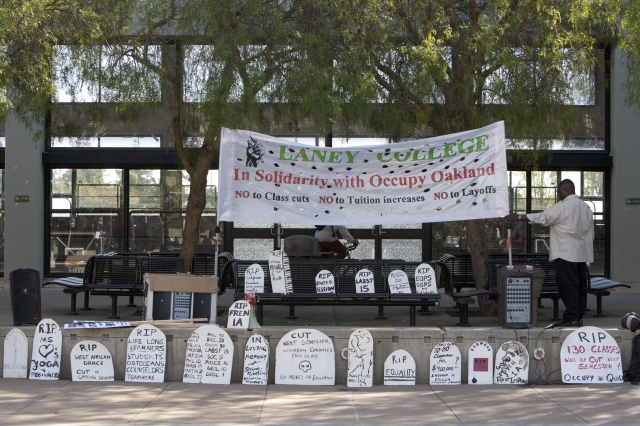 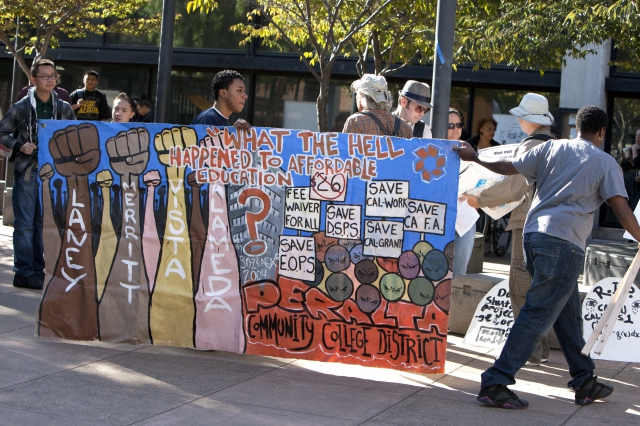 original image (3888x2592)
The schools of the community college district and most of the country want to know 'What the hell happened to affordable education?'
§WALKOUT!
by Malaika H Kambon
Thursday Nov 17th, 2011 10:31 AM 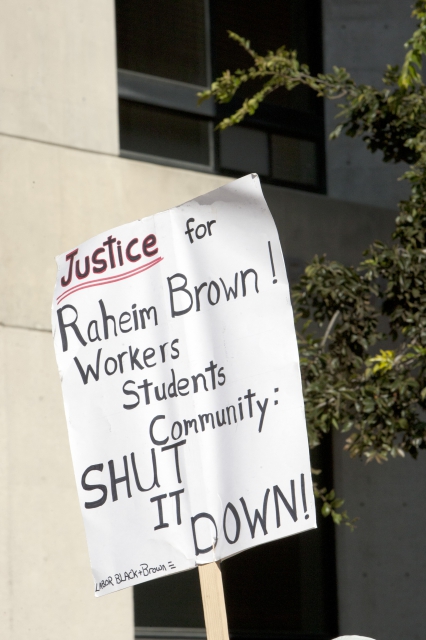 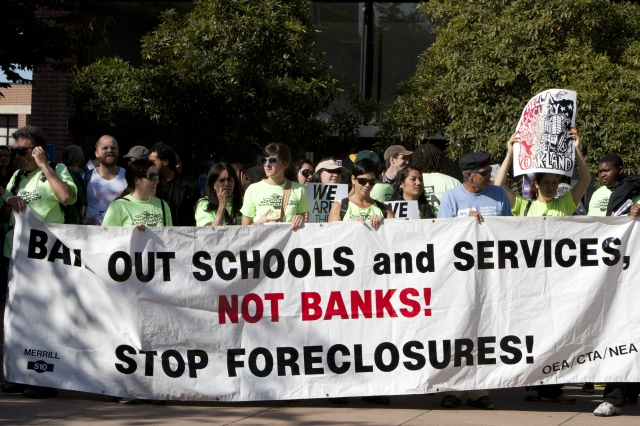 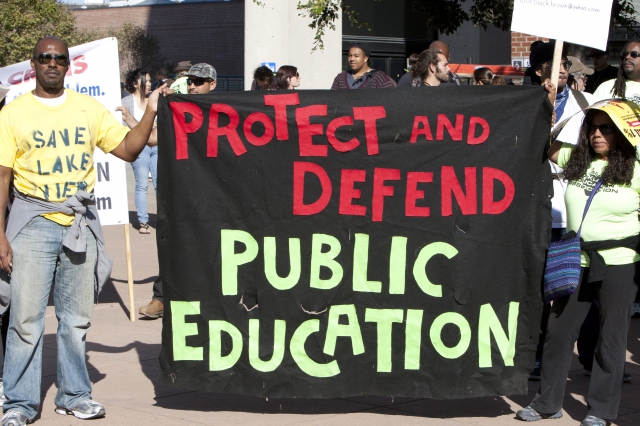 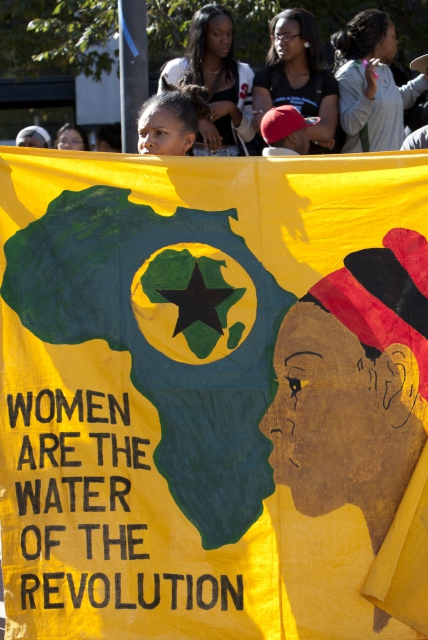 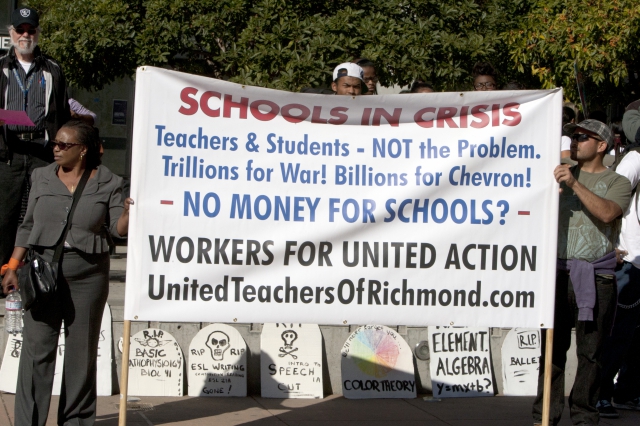 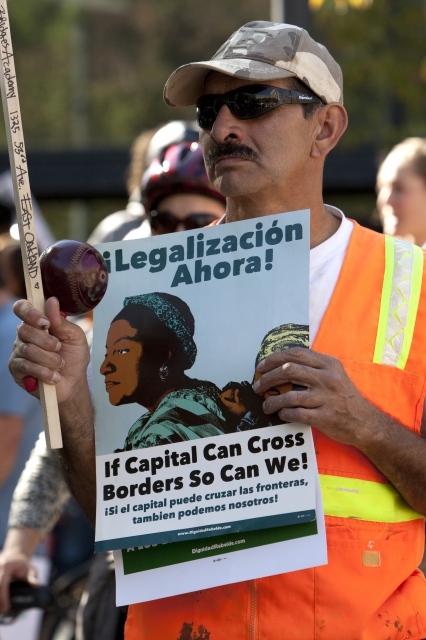 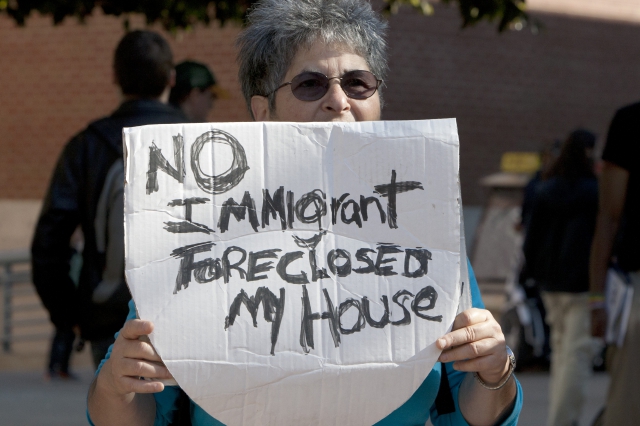 original image (3888x2592)
In an echo from the past when boxing genius Muhammad Ali refused to fight the u.s. war against Vietnam, proclaiming that 'No Vietnamese ever called me n***er!' this marcher reminds all that immigrants are not to blame for u.s. imperialist greed.
§WALKOUT!
by Malaika H Kambon
Thursday Nov 17th, 2011 10:31 AM 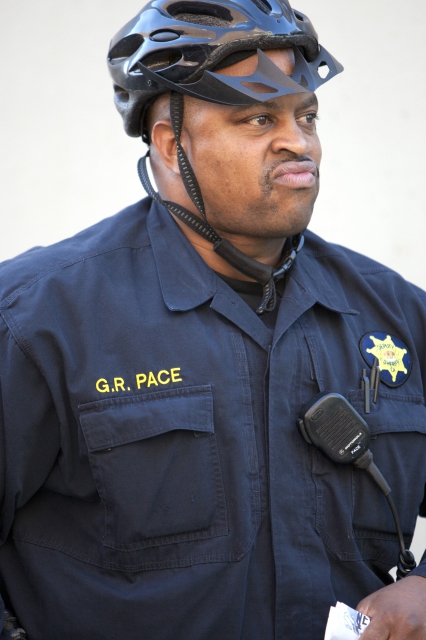 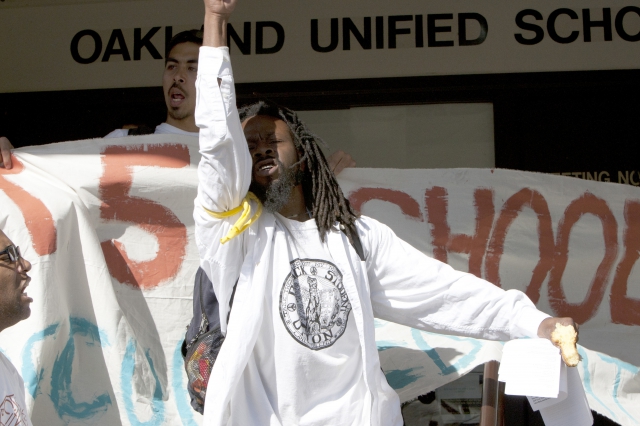 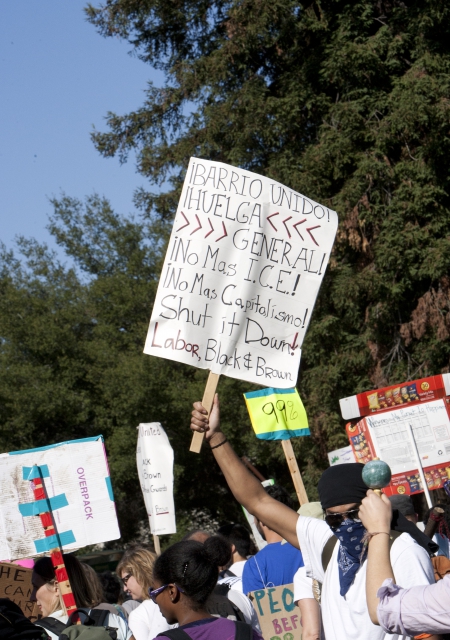 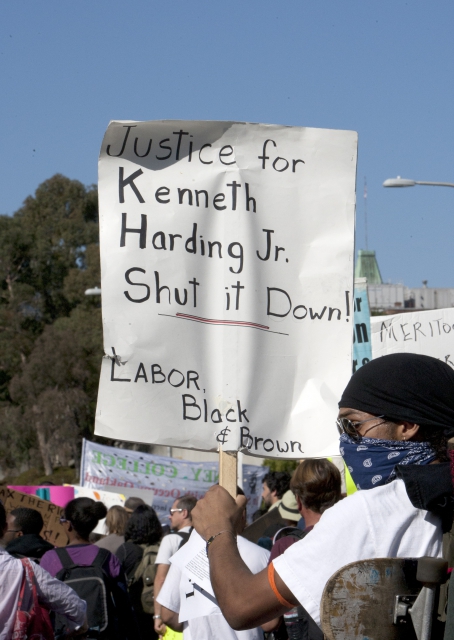 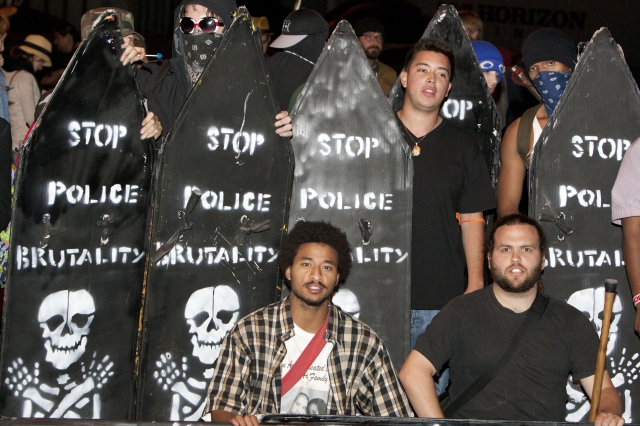 original image (3888x2592)
The people's shields - Protecting the people from harm throughout the day and here, at the Port of Oakland
Add Your Comments
LATEST COMMENTS ABOUT THIS ARTICLE
Listed below are the latest comments about this post.
These comments are submitted anonymously by website visitors.