Add an Event
Newswire
Calendar
Features
Home
Donate
From the Open-Publishing Calendar
From the Open-Publishing Newswire
Indybay Feature
Publish to Newswire
Add an Event
Related Categories: East Bay | International | Global Justice & Anti-Capitalism | Police State & Prisons
Occupy Oakland Egypt Solidarity March, 11/12/11: Photos
by Dave Id
Saturday Nov 12th, 2011 11:01 PM
Recognizing that Egyptians, in many ways the inspiration for the current Occupy Wall Street movement, marched in solidarity with Occupy Oakland after the police raid and attacks at Oscar Grant Plaza on October 25th, Occupy Oakland's General Assembly returned the favor by calling for a march on November 12th and releasing a statement in solidarity with Egypt. When the march stopped in front of the North County/Glenn Dyer jail on 7th Street, speakers addressed the issue of political prisoners worldwide, the Egyptian revolution, and the jailing of Alaa Abd El-Fatah by the Egyptian military just days after he had marched with Occupy Oakland on October 26th. 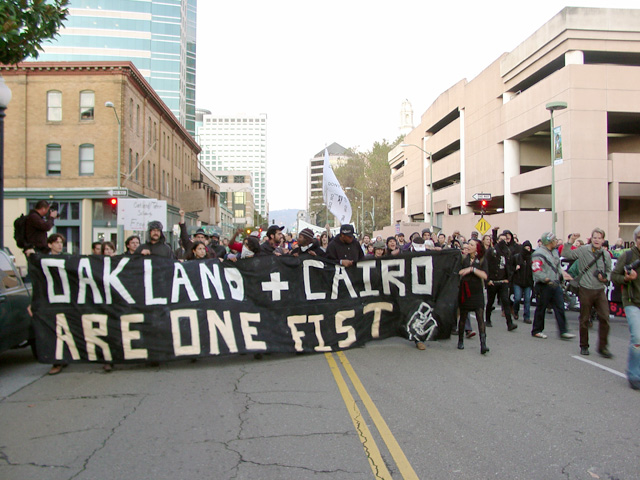 To the Revolutionaries in Egypt,

The January 25th revolution shook the globe. After over 30 years of living under a brutal dictatorship, the Egyptian people erupted in fury. We watched as you occupied Tahrir Square and resisted the government’s ruthless attacks; at the end of those 18 long days, we witnessed the power of a united people as you celebrated the revolution’s success in ousting Mubarak.

But we realize that your struggle is long from over. We watched in tears as the military council took power, protecting the remnants of the old government, and defending the system of economic oppression which continues to exploit and drive your people into poverty. It seems that they did not understand the now infamous chant: The people want the downfall of the regime. As the SCAF (the Supreme Council of the Armed Forces) promised to facilitate the transition to democracy, it has continued to kill protestors, viciously remove occupiers from Tahrir, conduct “virginity tests,” and persecute thousands through unjust military trials. Ridding yourselves of Mubarak was the first step, but now it is more evident than ever that the people will only be truly free when the whole system is abolished.

Do not stop in your efforts for freedom. You have already inspired thousands all over the world to occupy public spaces, to bring Tahrir Square everywhere. These liberated spaces have provided food, shelter, protection and education in a way that capitalism never can, and never will. But just as government thugs, the military, and the police repeatedly cracked down on Tahrir, police forces everywhere are raiding our occupations with the goal of destroying everything that we create. It has become clear that if we build shelters, develop safe spaces for people of color, women, the poor, trans and queers, if we set up open kitchens, create free schools– if we attempt to imagine a world without capitalism, we will be quashed by the capitalists and their army of police.

And so we stand with you. We are you. This entire generation has come to understand that we have no future in the current state of things. From Oakland to Egypt, there is only one chant: The people want the downfall of the regime.

Oakland has fallen in love with the Egyptian revolutionaries, and from Oscar Grant Plaza, we are standing with you. We are standing with you against all military trials, the repression from the government, and this system, which plagues all of our lives. Continue your resistance, strengthen your revolution, and do not be discouraged. You are the ones, after all, who have shown us all that another world is possible.

This Saturday, Nov 12th, as the Egyptian people call for solidarity from across the globe, rest assured that your comrades in Oscar Grant Plaza will be standing with you. Oakland and Egypt are one hand!

With Love and Solidarity from Occupied Oakland 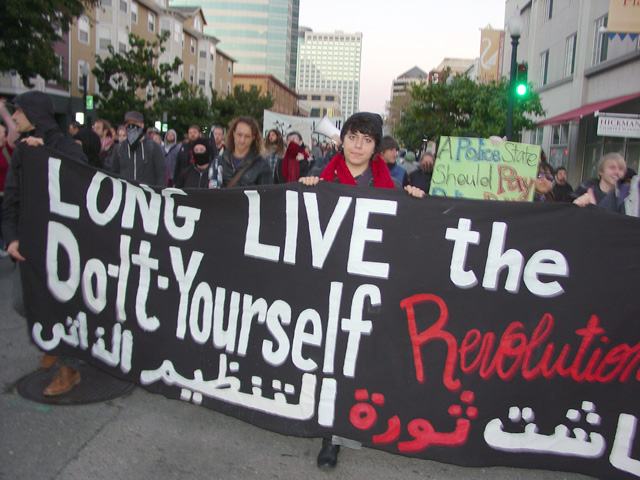 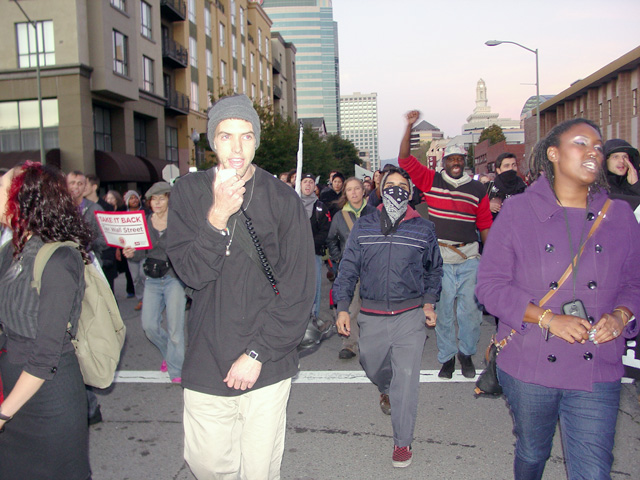 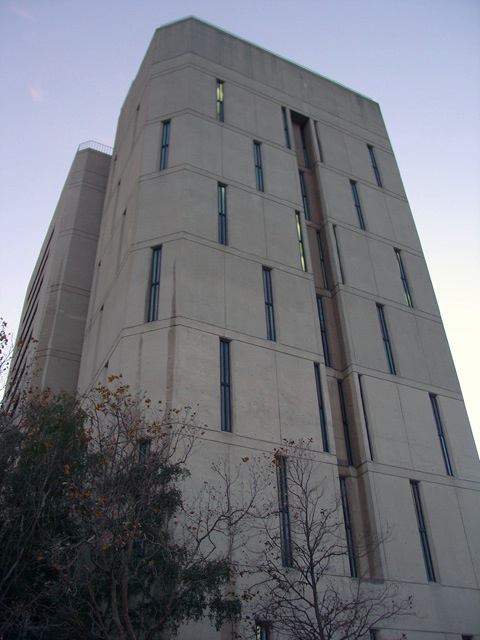 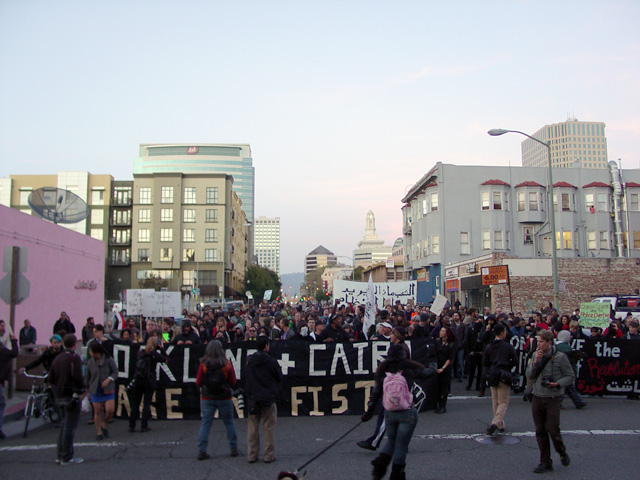 http://www.indybay.org/occupyoakland
§Claude Marks of the Freedom Archivespeaks about political prisoners in the U.S. and abroad
by Dave Id Saturday Nov 12th, 2011 11:01 PM 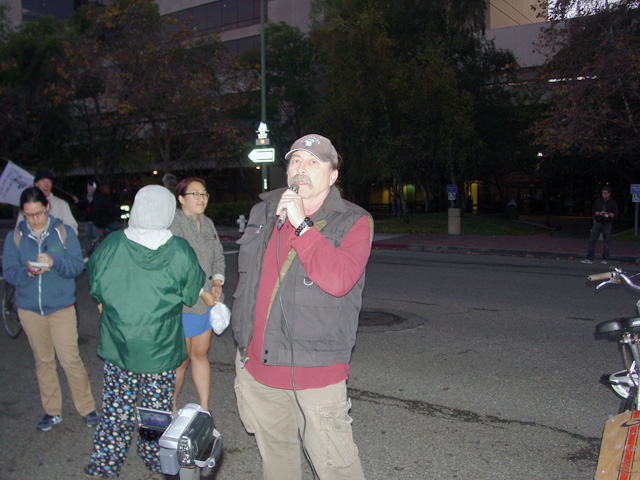 http://www.indybay.org/occupyoakland
§Janan reads a poem she and friends wrote at the beginning of the Egyptian revolution in January
by Dave Id Saturday Nov 12th, 2011 11:01 PM 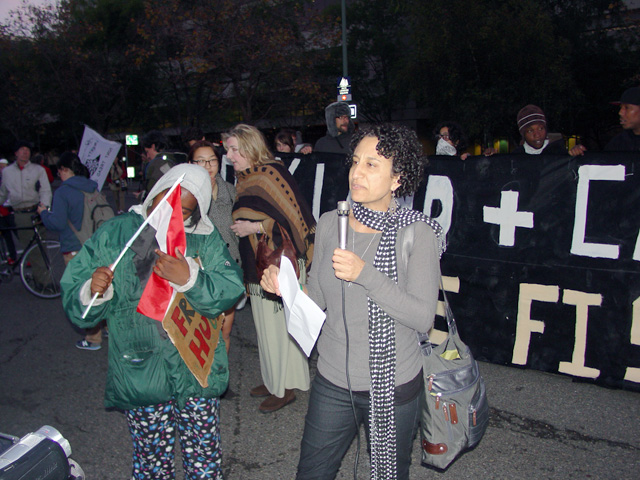 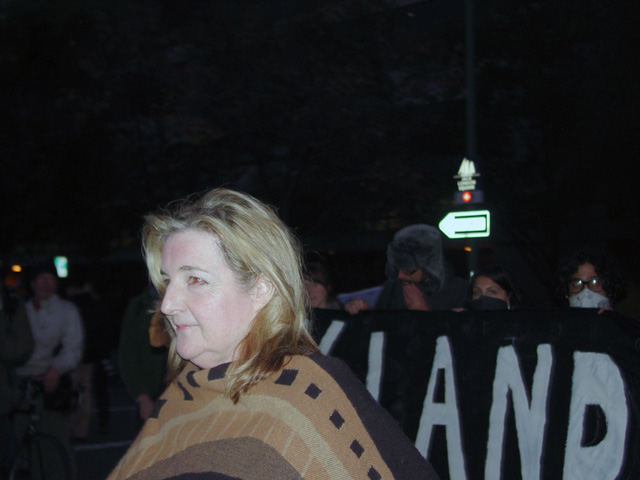 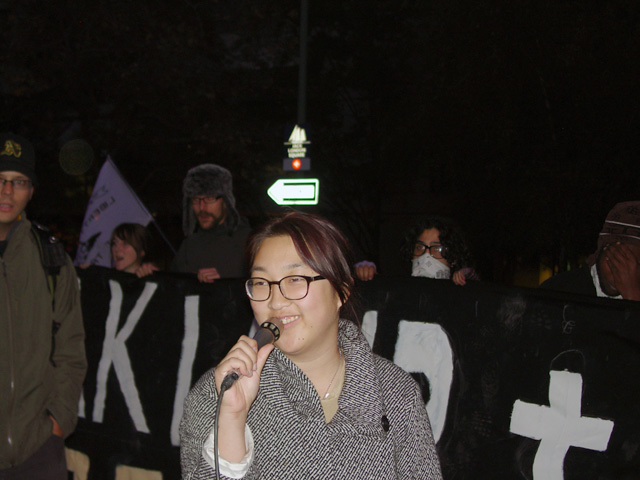 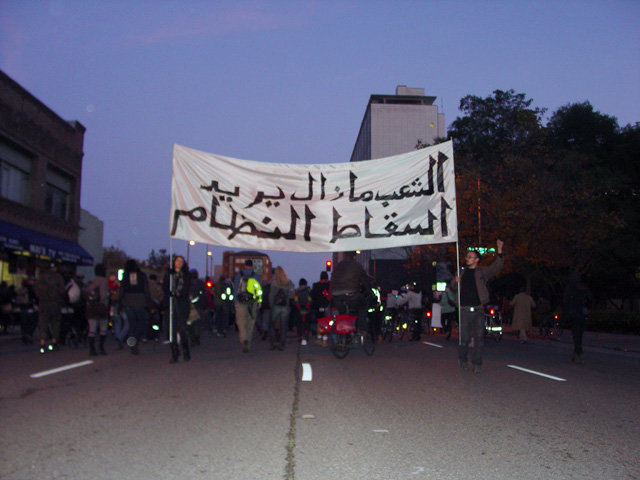 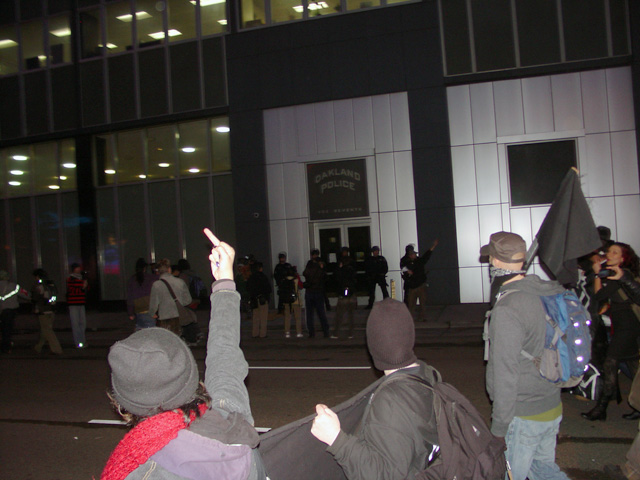 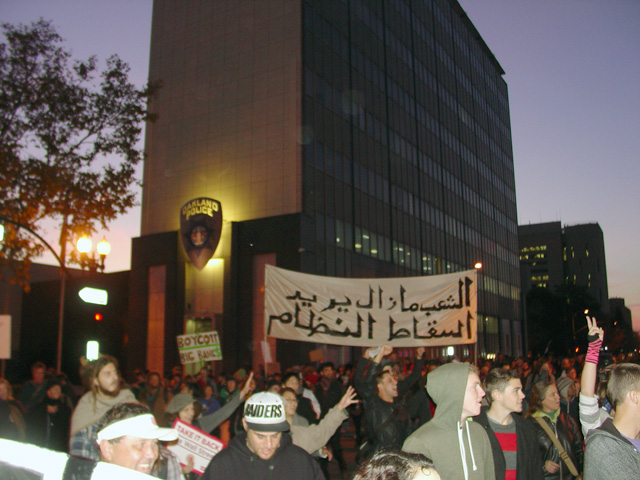 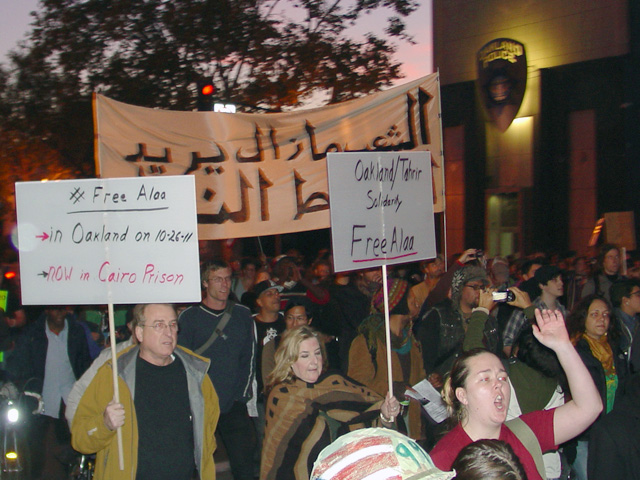 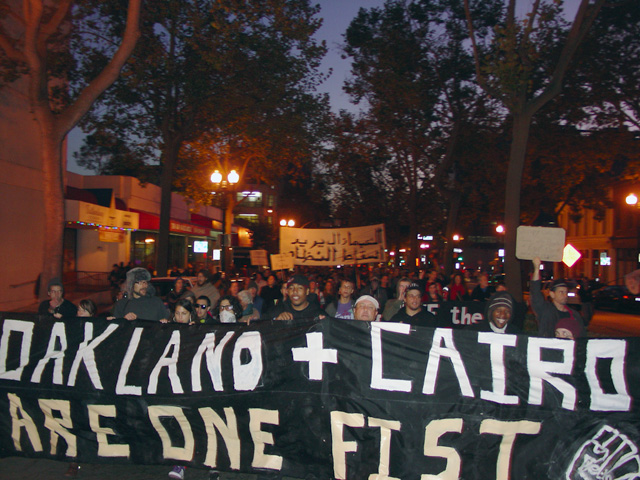 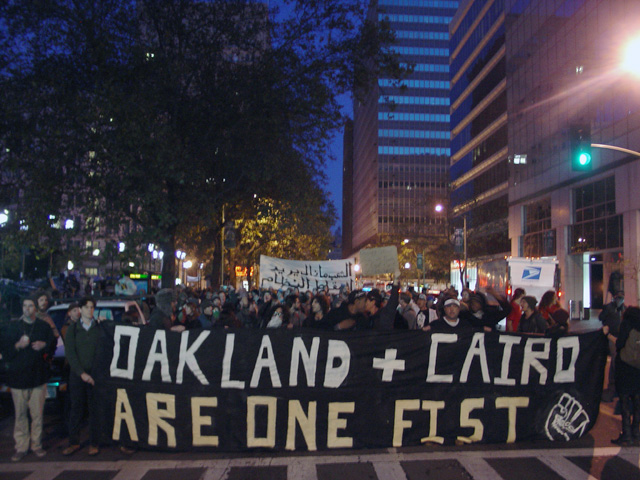 http://www.indybay.org/occupyoakland
§Occupy Oakland Stands with the People of Egypt and Syria, and all people who are fighting for their rights
by Dave Id Saturday Nov 12th, 2011 11:01 PM 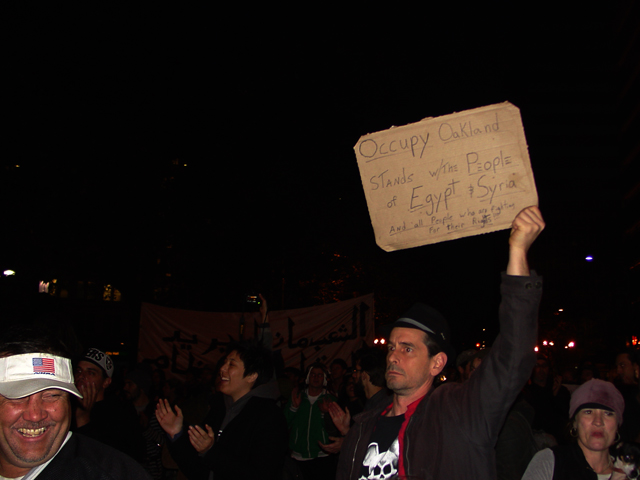