Veterans at Occupy Sacramento speak out against war, arrests

by Dan Bacher
"Out of my experience that day, I made my committment to work for peace - and decided that the best way to do that was as a pastor," said Jerry Pedersen, a Lutheran minister and veteran. "As a member of Veterans for Peace, I am working for our veterans to be treated honorably when they come home from war - and for the government to make a real committment to slow down the war and violence business."

Photo: Jerry Pedersen, speaking at the Occupy Sacramento press conference on Veterans Day, was a member of the honor guard that served at the surrender of the Japanese army aboard the USS Missouri on September 2, 1945. 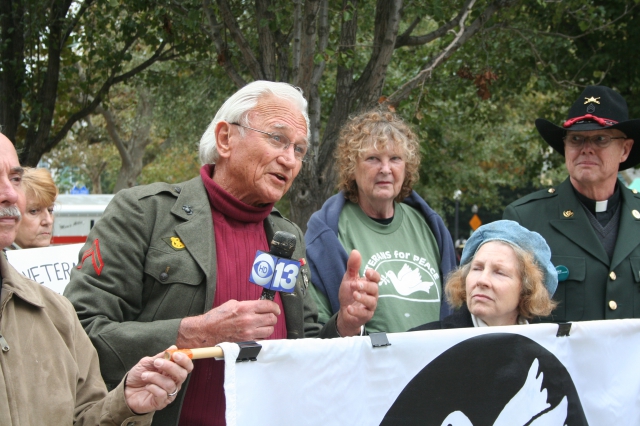 Sacramento area veterans, including many appearing in uniform or military garb with ribbons and medals, spoke out against wars that they said only benefit the 1 percent during a news conference held by Occupy Sacramento at Cesar Chavez Park on Veterans Day, 2011.

Jerry Pedersen, a Lutheran minister, was only 17 when he was drafted to serve in the US. Army in the Pacific during World War II. He was a member of the honor guard that served at the surrender of the Japanese army aboard USS Missouri on September 2, 1945.

"I was standing only 30 feet away from where the table where General Douglas MacArthur and officials of the allies and Japanese government met," said Pederson. "McCarthur said to the crowd, 'We preserve in peace what we won in war.'"

"Out of my experience that day, I made my committment to work for peace - and decided that the best way to do that was as a pastor," he said. "As a member of Veterans for Peace, I am working for our veterans to be treated honorably when they come home from war - and for the government to make a real committment to slow down the war and violence business."

He emphasized that the Occupy Wall Street movement has arisen because most Americans sense that the problems of American life result from inequality and disparities in income. "War doesn't solve this problem - it at best postpones dealing with it," he stated. "I am convinced that war is no way to peace. Gandhi, Cesar Chavez and Jesus were all right that the ends does not justify the means."

Cres Vellucci, Vietnam veteran and spokesman for Occupy Sacramento, emphasized that the first two people arrested at Occupy Sacramento were veterans – one from the Iraq War and the other from Vietnam.

Vellucci noted that the continuing arrests – now 84 – at Cesar Chavez Park for petty curfew violations is an affront to every American, especially those who have risked their lives to defend the same rights.

"What we're seeing now is wars by the U.S. government for the 1 percent," said Vellucci, "not for the 99 percent. At the same time, City has really declared war on the people in Occupy Sacramento, including veterans."

Vellucci said that the protesters were originally arrested for "unlawful assembly." However, District Attorney Jan Scully, stating that "no crime had been committed," refused to prosecute the protesters for exercising their First Amendment rights.

Then, in an Orwellian move condemned by civil rights lawyers, the City of Sacramento decided to prosecute the protesters on new charges - remaining in the park after curfew and loitering.

"We believe the First Amendment does not end at 11 pm or midnight, but continues all day long," said Vellucci.

Meanwhile, the people of Sacramento, in a time of severe economic crisis, are paying the price of the City's repression of protesters' First Amendment rights. Vellucci estimated that the City has spent between $400,000 and $500,000 to date to arrest and prosecute protesters.

John Reiger, US Army veteran, offered the services of the Veterans for Peace, Sacramento Chapter, to mediate between Occupy Sacramento and the City to reach an agreement that would be acceptable to both parties to allow the protest to continue without the regular arrests.

The veterans also addressed the attacks on veteran Scott Olson in Oakland and other veterans across the state at Occupy demonstrations throughout the country.

In addition to holding the press conference, Occupy Sacramento marched with Veterans for Peace at the official Sacramento Veterans Day Parade that morning. At 1:30 p.m. veterans joined Occupy Sacramento at the park for a reception. After the reception, the veterans and Occupy held an anti-war protest.

For more information about upcoming events or other information at Occupy Sacramento’s peaceful rallies visit http://www.occupysacto.org.
Add Your Comments
Support Independent Media
We are 100% volunteer and depend on your participation to sustain our efforts!