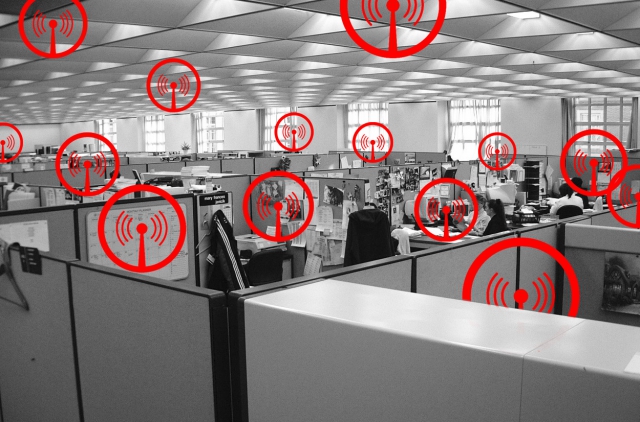 original image (1250x826)
His career could be damaged by talking openly about what he calls the “conspiracy of silence” around the unacknowledged harm in wireless technologies. He also finds himself sensitive to wireless transmissions, and unable to openly discuss that with his co-workers or peers.

“In the late 1990s, when some of the first data-transmission technologies were being developed, I had a conversation with an RF engineer. He told me, off the record, that he and other engineers were very concerned about at least one of the technologies being used in cell phone transmission—there were insane amounts of radio-frequency power coming out right next to people’s heads. That’s how long people in this field have known there is something wrong, and have not been able to say a word.”

“I’m very wary of this technology. A few years ago I hadn’t really thought about wireless having harmful effects. But then this is what happened to me. I bought a wireless/wired router for my home network. I assumed you had to turn the WiFi option on. I didn’t know it was on by default when using just the wired option. It sat less than five feet from my desk. After a week I realized I was feeling really bad. I started to think about it. I went through a kind of tech-support type of trouble-shooting, like I do for other things. ‘What’s different this week?’ So I put the old [wired] router back. Within two days I felt better.”

“That WiFi router left me with low energy and headaches, and I felt like my brain wasn’t all there. I have to use my brain to work! My home-office is about two feet from my electric meter, on the other side of the wall. I am very sure I don’t want a ‘smart’ meter there. I’m a cancer survivor. There’s no way I’m going to have a ‘smart’ meter on my house.”

“I work at home and live out a ways in the country. When I leave home and go back to civilization, I don’t feel well. I feel disoriented. It’s like going back into smog—like Southern California, when I used to live down there.”

“I think about things analytically. We have inserted all these new variables into the environment, without these things being tested. Why is it assumed that they are safe? There is a conspiracy of silence, and there has been for twenty years. Who knows how much bigger it is now.” William himself has tried to have information published, but suffered backlash for it (to say more than this would disclose identifying details).

“The truth is people who work in tech live in a totally different world. Engineers are oriented to their own self-enclosed universe, where people are responsible citizens and everything is logical. They just don’t get the part about psychopathic bosses and ruthless profits.”

“Engineers can be trained in, say, mechanical engineering, and still think they are smarter than you in, say, networking. You folks fighting ‘smart’ meters have to be able to show tech types that you understand the technical aspects of ‘smart’ meters—or they will immediately dismiss what you are trying to do by calling you tin-foil-hat types.” Green Tech Media, for instance, which serves the sort of engineer William is talking about, puts health concerns about ‘smart’ meters in the same category as crop circles and alien abductions.

William has another warning for us. “The cell phone industry wants to get in on the ‘smart’ meter deal, and into the smart grid.” Qualcomm recently argued for using the cellular network for ‘smart’ metering. He knows something of Qualcomm’s technology—and even more about the company’s ruthlessness. “They weren’t involved before. If Qualcomm says they’re going to do something, it gets done. Watch out for what they are up to.”

Perhaps every house with a ‘smart’ meter in this nation could become considered a “telecommunications facility,” and thereby every citizen will lose the power to protect themselves, their family, or their neighborhood from 24/7 radio-frequency emissions. William suggests we keep our eye on this emerging aspect of the ‘smart’ grid. Here’s another article about Qualcomm’s “SmartSynch” program.

“If you read the technical media, these people working on the ‘smart’ grid are totally upfront about what they want to do, about the scope of their ambition. And so far, it seems like few people are noticing. Real investigative reporting is missing from this picture. You don’t even have to have a complete understanding of the technology to report on it. The level of apathy today is frightening.”

“For myself, I have a meaningful connection to the natural world and the cosmos, living out here in the forest. When I see people glued to their wireless gadgets I have this feeling that many of them don’t have that have level of meaning in their lives. It’s like those gadgets have taken the place of real connections.”

Working at home, William can manage his sensitivities and keep employed. We hope we can address some of his suggestions, and bridge the gap between those who’ve been harmed by tech, and those who are working inside it.
http://stopsmartmeters.org/2011/11/09/sens...
Add Your Comments
Support Independent Media
We are 100% volunteer and depend on your participation to sustain our efforts!