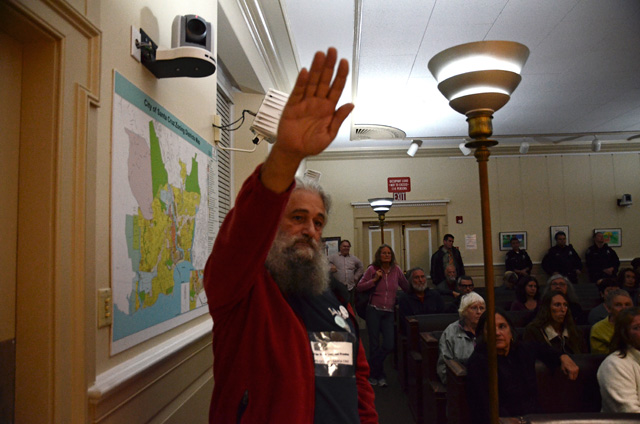 Norse's display of the gesture came after the 5pm public commentary period was closed at the council meeting. A wide variety of comments during the evening were made by the public in relation to camp sanity at the San Lorenzo Park location of Occupy Santa Cruz. Mayor Ryan Coonerty threatened Norse with removal from council chambers for exclaiming, "open the bathrooms," shortly after Vice-Mayor Don Lane decided to respond to the public about the Occupy Santa Cruz camp. After a second person yelled out "open the bathrooms," Coonerty replied, "I will ask the police to try and figure out who it was who yelled out, they are warned, if you can figure out who they are, and um....". This comment by Coonerty prompted the salute from Norse. 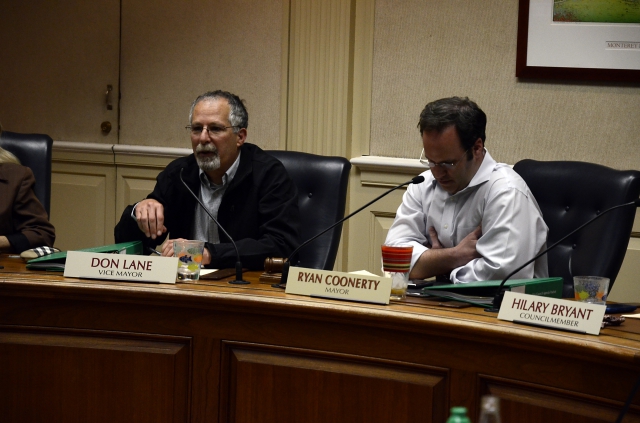 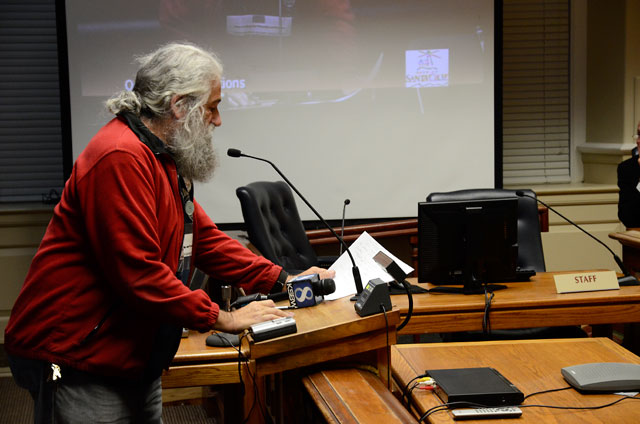 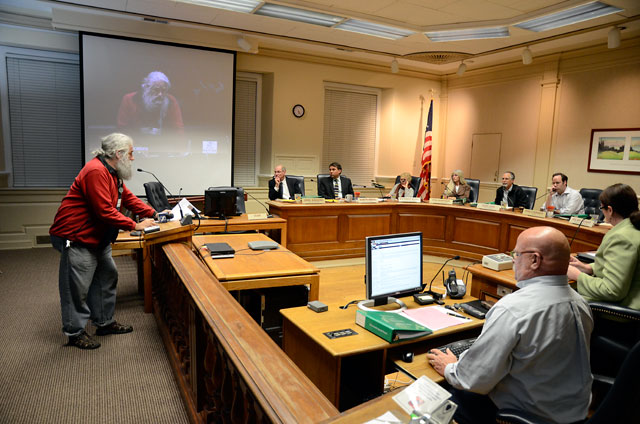 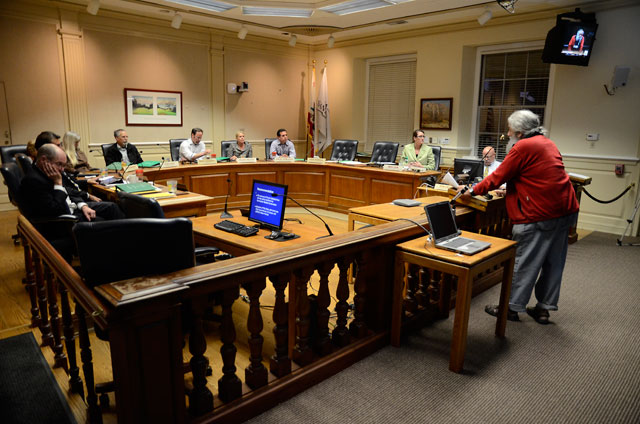 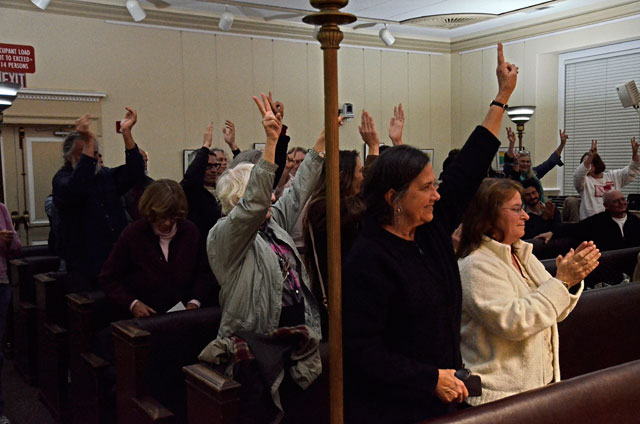 The public was excited after the last speaker spoke during the commentary period. The mood changed once Vice Mayor Don Lane began to speak on the issue. Former Santa Cruz Mayor Celia Scott (pictured) also spoke, and was counted among the Occupy Santa Cruz Supporters at the council meeting.
§Police
by Alex Darocy (alex [at] alexdarocy.com)
Wednesday Nov 9th, 2011 10:27 AM 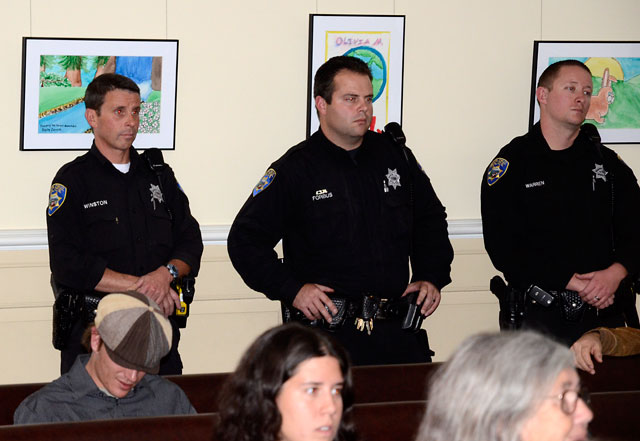 Three of the four officers present that evening.
§Once Again
by Robert Norse
Wednesday Nov 9th, 2011 7:00 PM
CALLING REPRESSION BY ITS RIGHT NAME
Mayor Coonerty's direction to police to remove a member of the audience who called the Vice-Mayor Lane on his false statement was what motivated my "you're acting like a fascist; stop it or be called one" mock-Nazi salute. It's a strong serious silent political statement about abusive conduct by a sitting Mayor, who has institutionalized repressive procedures at City Council and needed to be challenged.

If we do not assert our rights, we lose them, however indecorous or unpopular that may be with some.

After Coonerty in a mean-spirited and begrudging extension of Oral Communications, cut off the former Mayor Celia Scott and allowed only one minute per speaker, Don Lane launched into a rambling six minute speech. It seemed particularly noxious that Councilmembers can drone on while those whose "Oral Communications" period it is are shut down to 1 or 2 minutes. which included numerous false and defamatory statements about the phony sanitation issue the City will attempt to use tomorrow in court to shut down the protest.

It is particularly hypocritical for the City to complain about poopoo and peepee when it locks up its own park bathrooms at night. To claim "misuse of the park" as an excuse to shut down, limit, or criticize the protest (as Lane was doing) seemed a deliberate attempt to mislead the public. It upset numerous people in the audience.

SHOW US THE COMPLAINTS, VICE-MAYOR LANE--AND OPEN THE BATHROOMS IN THE PARK!
Lane pulled the same gambit the day before at the city council office when stonewalled before a group of protesters (See http://www.indybay.org/newsitems/2011/11/08/18698276.php ). He claimed he'd received "many complaints", but then declined to pass them on for verification (as is required of communications to Councilmembers on public issues under the Public Records Act). This raised serious doubts about Lane's credibility on this issue, and a voice or two was heard from the audience.

In response to those brief expressions of disbelief, Coonerty called on his quadrupled police presence to 'find and remove" the culprit. Here we have the special "only if I don't like it" exception to the First Amendment that Coonerty has been raising with some regularity.

Coonerty, however, has passed the bar and taught constitutional law (!?) at Cabrillo and UCSC. He's surely read the most recent 9th Circuit en banc decision in Norse v. City of Santa Cruz. Yet he insists on struggling to maintain his power to repress--even in the face of unanimous court decision. (See my editorial on this at http://www.santacruzsentinel.com/ci_19074742?IADID).

The City Council has spent over $125,000 in defense of a false arrest for daring to make a mock-Nazi salute 9 years ago. Coonerty knows that behavior he finds offensive cannot be the basis of a lawful arrest (or exclusion from city council via the threat of arrest) unless it's actually disruptive. A disruption is something that materially stops the meeting, not something he finds offensive.

It would all be doubly hypocritical if Lane knew about the proposed Injunction reportedly going to the courts tomorrow to eliminate the protest as a "public nuisance." See http://occupysantacruz.org/2011/11/09/santa-cruz-city-attorney-wants-to-see-us-in-court-and-prevent-preliminary-injunction/?mid=524 . The scuttlebutt has it that city shysters will be heading to the courthouse tomorrow at 1 PM to beat the protest out of the park using an Injunction as a club.

Folks might want to pack the courts tomorrow around that time to keep an eye on this latest repressive move. Pleich's memo lacks documentation and seems to have familiar "run for your life, the authorities are coming" twist to it. Hopefully there'll be more specific info soon. Ultimately, however, it is the protesters and the public--not the authorities who will decide this issue.

PUBLIC RECORDS REQUESTS
I've asked Councilmember Beiers to clarify if this issue was agendaized in closed session of City Council or brought up anywhere before being pushed in court. Beiers showed up at OSC today in the midst of the HUFF (Homeless United for Friendship & Freedom) meeting and agreed to provide back e-mails around OSC. Any member of the public should be able to get them, but it would be easier if a Councilmember directed a staff member to make them available. This should show us the extent (or absence) of public criticism or support for OSC--at least as it's reached the Council.

Some Councilmembers, however, reserve the right to conceal or destroy their e-mails. Obviously public servants shouldn't be allowed to do this, since we have a right to know who's lobbying who for what. That's the price for being voted into these powerful positions.

Still no action from City Council on opening the public bathrooms in the park at night, though. Hold your water everyone.
Add Your Comments
LATEST COMMENTS ABOUT THIS ARTICLE
Listed below are the latest comments about this post.
These comments are submitted anonymously by website visitors.