by Mike Rhodes (editor [at] fresnoalliance.com)
Day 13 of the City of Fresno and Caltrans attack against downtown homeless encampments saw continued assaults on G street, The Hill, and Golden State Blvd. New attacks against the poor were initiated on Santa Clara street and F street. By the time you read this, it is likely that all downtown Fresno homeless encampments will have been destroyed. The City of Fresno is estimating that 200 homeless people have been dislocated. Homeless advocates estimate the number is closer to 500. There are an estimated 15,000 homeless people in the City of Fresno. 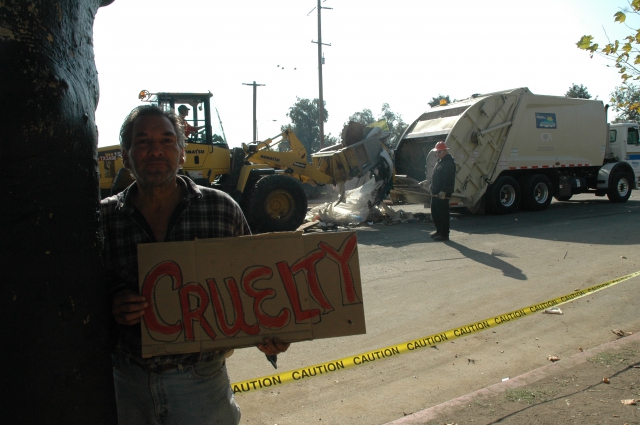 original image (3008x2000)
The photo above was taken on Santa Clara street Tuesday morning (November 8, 2011) as City of Fresno work crews destroyed a row of structures, built by homeless people, as they attempt to survive on the cruel streets of Fresno. Bulldozers plowed through their shelters, leaving most homeless people with nowhere to live. Some housing vouchers have been given out, but most of the homeless people I talked to said they had no where to go. Nobody seemed to know where they were going to spend the night. There was some talk of joining Occupy Fresno at Courthouse Park, but for the last three nights, Occupy Fresno activists have been arrested for exercising their right to assemble. See: http://www.indybay.org/newsitems/2011/11/06/18697863.php

City workers visited each of the shelters on Santa Clara and F street telling the residents that they had to remove their property and leave. They told them that what they did not take with them would be destroyed and taken to the dump. There are conflicting reports about whether they were being told that the city would store their property for 90 days, but some homeless people were given trash bags and those bags were being loaded onto trucks destined for the storage facility. It is probable that if the person who owned the tent or shelter being targeted was not in or near their shelter, they did not get the warning.

Nate, who is a homeless man I talked to this morning, said he was offered housing and was looking forward to moving. He told the city workers that they could destroy his tent, because “that is now a part of my past.” Several of Nate’s friends are also receiving housing vouchers.

But, for most of the homeless, the future is much more uncertain. You can see homeless people pushing their shopping carts, with all of their possessions, throughout downtown Fresno - they are looking for a place to sleep. Many homeless people, particularly single women, are more vulnerable now because they no longer have neighbors who can help protect them from predators.

In a statement sent to the media today, the City of Fresno quoted part time homeless Czar Greg Barfield as saying " “the City and its partners are devoting a tremendous amount of resources to finding long-term solutions to our homelessness issue. We’re in the midst of a methodical process that involves collecting many documents and matching the needs of individuals with the resources available in the community, but the reality is that we’re all working together and making progress in getting these homeless individuals the help they need.”

Most progressive homeless advocates don’t agree with the city’s approach and complain that the destruction of the homeless encampments in the downtown area will make peoples lives more difficult. A better approach would be to provide the homeless with basic public services - drinking water, a place to go to the bathroom, and trash service. Phase two would be to establish safe and legal places for the homeless to stay, until the city and county of Fresno can provide them with the housing it says it is working on. To force the homeless to live on the streets, with no access to shelter, is cruel and heartless.

END_OF_DOCUMENT_TOKEN_TO_BE_REPLACED
§Lost Part of our Lives
by Mike Rhodes 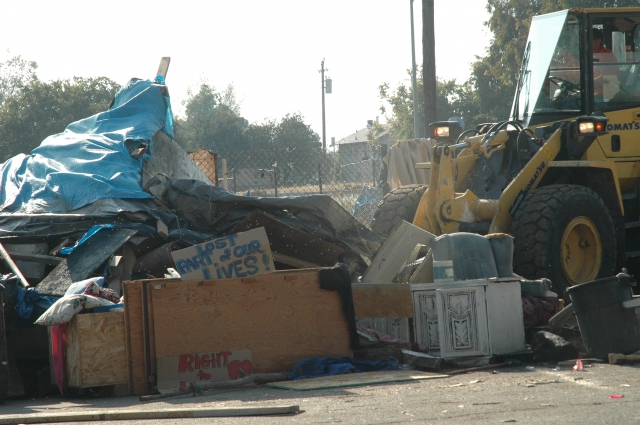 original image (3008x2000)
This is how many homeless people felt about the destruction of their community by the City of Fresno.
END_OF_DOCUMENT_TOKEN_TO_BE_REPLACED
§An Observer
by Mike Rhodes 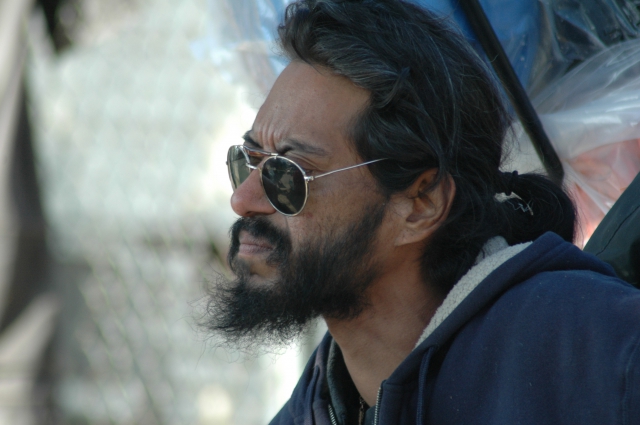 original image (3008x2000)
Homeless people sat on the other side of Santa Clara street and watched as city workers destroyed their homes.
END_OF_DOCUMENT_TOKEN_TO_BE_REPLACED
§This Used To Protect Someone from the Rain
by Mike Rhodes 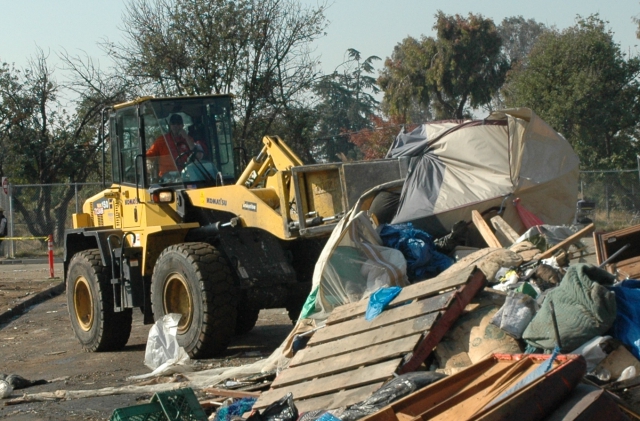 original image (1359x896)
END_OF_DOCUMENT_TOKEN_TO_BE_REPLACED
§Last Night, Someone had this bed to Sleep on
by Mike Rhodes 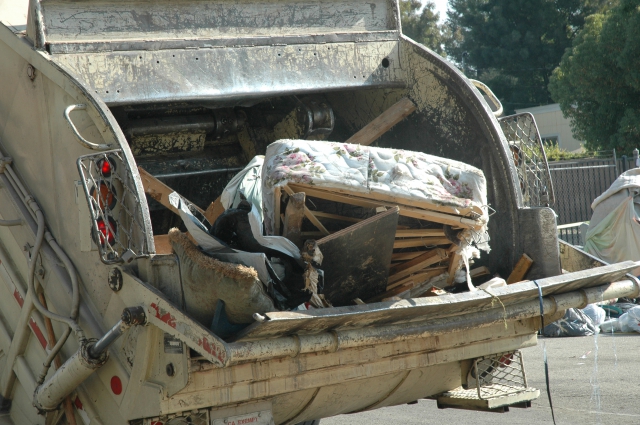 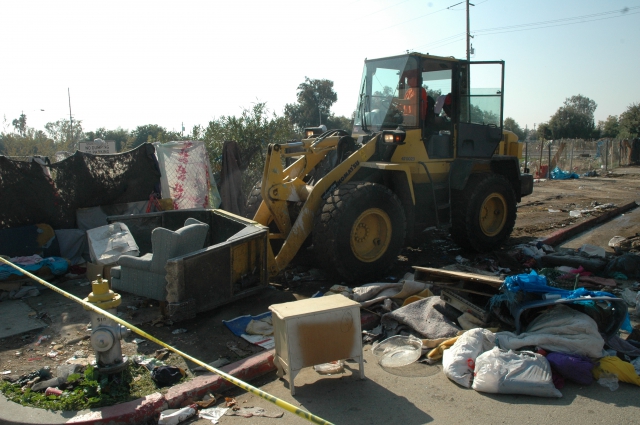 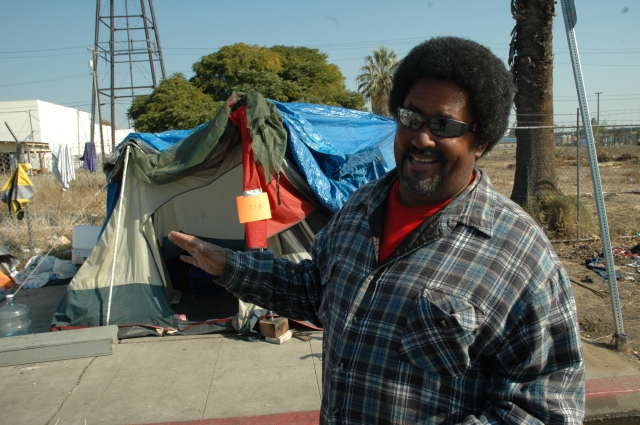 original image (3008x2000)
Part of the city’s strategy was to provide housing vouchers for some of the homeless with leadership skills. Nate was able to organize his block, so he was targeted to get housing - in other words, they were able to neutralize Nate by providing him with something many of the others did not get.
END_OF_DOCUMENT_TOKEN_TO_BE_REPLACED
Add Your Comments
Support Independent Media
We are 100% volunteer and depend on your participation to sustain our efforts!