It reads: "Solidarity needed at the Occupied Courthouse steps, ASAP! Santa Cruz County Sheriff Lt. Pursley just arrived to tell us that there will be problems if we don't break down the "unlawful structure" our beautiful geodesic dome in two hours. Very suspicious: everyone is right now preparing for our well publicized march to City Hall, which departs in just about 2 hours!

Come down now to support, and join with at 2:30pm us as we deliver our response to City Hall: "Our permit is the First Amendment."

The geodesic dome is pictured at http://twitpic.com/7bprzq?mid=5223 .

I'd suggest that the sheriff's threat will actually backfire, since the media and community are already on alert for the march. It can be delayed to deal with this, if folks so choose--and folks can speak up about other recent sheriff harassment in the form of 647e tickets. They can escort media over to the San Lorenzo park bathrooms and show them what the city locks up at night. And so forth.

I'd also wager the camp will probably look in pretty good shape, hopefully without that disconcerting occasional eruption.
§Update
by (posted by) Norse Monday Nov 7th, 2011 1:01 PM
I just got the following e-mail/update from Andy--it's now 1 PM as I post this on indybay:

"Solidarity needed at the courthouse NOW! Sheriff says that if we don't have the dome down by 1pm (15 minutes!) they will cut it down for us. Come down NOW to support, and continue on with us at 2:30pm as we deliver our response to the City Hall permit: "Our permit is the First Amendment." DEFEND THE DOME" 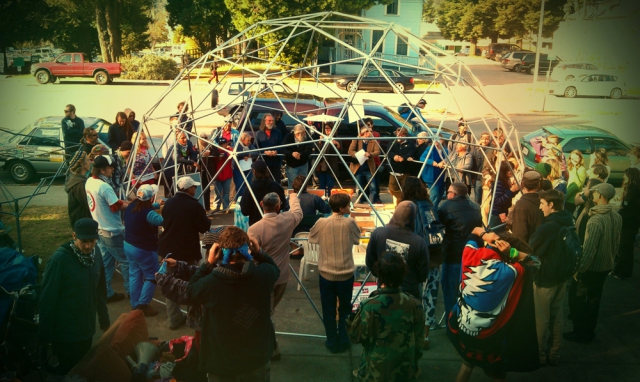 original image (1000x598)
Occupiers gather to defend our new geodesic dome after receiving threats by Santa Cruz County sheriffs. This was shortly before we marched to City Hall to deliver our response to their permit-ultimatum: “The first amendment is our permit!” (Photo by @a_sunspeck)
http://occupysantacruz.org/
Add Your Comments
Support Independent Media
We are 100% volunteer and depend on your participation to sustain our efforts!