by Posted by Mike Rhodes (editor [at] fresnoalliance.com)
About 15 Occupy Fresno protesters were arrested at Courthouse Park early Sunday morning. Camille Russell reports on what happend. 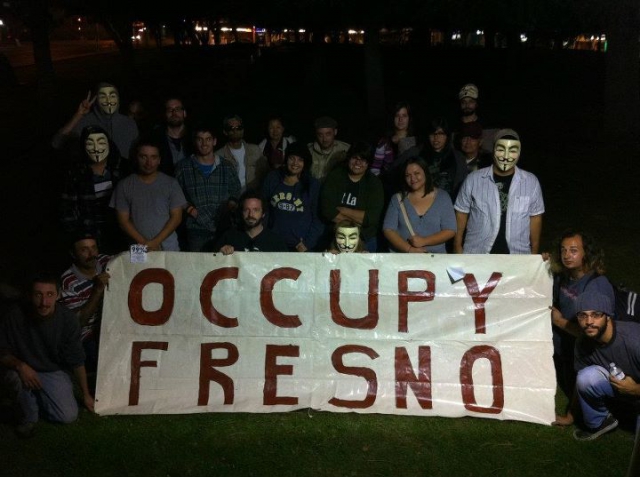 I arrived at Courthouse Park at 3:40 a.m. The rain had stopped. Tents and other items had been removed. The Occupy Fresno sign remained and the area around it was lit. There were small groups of people quietly standing on the sidewalk away from the gazebo and in the parking lot street. I found Dan. He told me the occupiers had been given time to take down the tents and put things into cars.

Fifteen occupiers, including the group's attorney Bob Navarro, began walking single file toward the gazebo. They sat on the gazebo steps beneath the Occupy Fresno sign in 2 rows and began chanting. (Darn, I left the camera in the car.)

Whose streets?
Our streets

There were 40 sheriffs in the area. They wore helmets with the visors up and stood in lines on the sides of the gazebo and in front of those of us observing; others were scattered about.

Fifteen of us were supporters and observers.

One of the sheriffs spoke from a loudspeaker in a vehicle parked on the walkway that angles to the center of the park. He announced his name, which I couldn't understand, and Fresno County then said, "I hearby declare this an unlawful assembly. In the name of the people of the State of California, you are ordered to disperse."

As many of you may have already heard the Sheriffs showed up early this morning and arrested 15 people of Occupy Fresno. As of now they have still not been released and are still in jail. Some of us met and agreed to re-occupy the park at 5pm where we will hold our general meeting (legally) since the ordinance will not apply to us until 12-6 a.m. We will be having a 5pm general assembly meeting and at the same time we will address the media so that we can get our side of the story out. Please be there in support and let's keep this movement going.

PS: Any media wanting to speak with any member who was arrested should arrive and to the location and request their cooperation. We support free speech even though others may not.

OCCUPY FRESNO!
Add Your Comments
Latest Comments
Listed below are the latest comments about this post.
These comments are submitted anonymously by website visitors.
TITLE
AUTHOR
DATE
Tuesday update
various
Occupy Fresno Protesters Arrested
Dan O 29
Person Just Arrested for Carrying a Sign
Peace Fresno
more arrests tonight
Dallas B
Support Independent Media
We are 100% volunteer and depend on your participation to sustain our efforts!