original image (1024x481)
On Wednesday, November 2nd as part of the Oakland General Strike, we will march on the Port of Oakland and shut it down. We will converge at 5pm at 14th and Broadway and march to the port to shut it down before the 7pm night shift.

We are doing this in order to blockade the flow of capital on the day of the General Strike, as well as to show our commitment to solidarity with Longshore workers in their struggle against EGT in Longview, Washington. EGT is an international grain exporter which is attempting to rupture longshore jurisdiction. The driving force behind EGT is Bunge LTD, a leading agribusiness and food company which reported 2.4 billion dollars in profit in 2010; this company has strong ties to Wall Street. This is but one example of Wall Street’s corporate attack on workers.

The Oakland General Strike will demonstrate the wide reaching implications of the Occupy Wall Street movement. The entire world is fed up with the huge disparity of wealth caused by the present system. Now is the time that the people are doing something about it.The Oakland General Strike is a warning shot to the 1% – their wealth only exists because the 99% creates it for them.
http://www.occupyoakland.org/2011/10/block...
§Nov. 2 General Strike Call and Mayor Quan's labor cop, Sharon Cornu
by Jack Heyman (jackheyman [at] comcast.net) Tuesday Nov 1st, 2011 8:32 AM
REPORTING FROM NYC: At last Friday's General Assembly at Occupy Wall Street I announced Occupy Oakland's call for a general strike on Nov. 2 to a thunderous applause. Undoubtedly, there will be a massive turnout on Nov. 2 in Oakland with support from the occupy movement in other cities, as reported by one longshoreman from Philadelphia. News media in New York and internationally are focused on Oakland. Will it actually be a general strike? Historically unions have called and organized general strikes with adequate time to organize it. None of these conditions exist, nevertheless, the generalized pain felt over the deepening capitalist crisis and the outrage over the bloody police attack on Occupied Oakland, particularly on Iraqi Vet Against the War, Scott Olsen will generate a tremendous outpouring. Mayor Quan and her top labor cop, Sharon Cornu, former head of the Alameda Labor Council, should both be held accountable and removed from office. They're scurrying around unions like longshore, teachers and SEIU city workers trying to find out how workers will respond. Fools! Don't they understand that this is an irrepressible anger from below, not from above? Shut Oakland Down Tight!!
http://www.transportworkers.org
Add Your Comments

§Freedom or Socialism
by Mark Vicunas
Saturday Oct 29th, 2011 11:38 PM
Folks, we are at a crossroads not unlike what those farmers and craftsmen experienced in the 1700’s. We have two clear choices. Freedom or Socialism. Which one do you choose? Do we stand up together and make the collective sacrifices together needed to defend freedom and American exceptionalism as our founders did or do we conform to what the King wanted, or in our case, what Obama, the liberals and the global authority want? Thankfully we do not need to pick up arms to do so as our founders did many years ago to protect our freedoms because technology has given us the resources to succeed. Our collective response to these constant attacks by the liberals and liberal media to destroy American Exceptionalism must be to continue to educate the American people on what the tea party movement really is, which is just regular everyday American patriots rising up to protect these dear freedoms that our founders fought for over 230 years ago. When the majority of Americans see the clear distinction to what the tea party movement is fighting for over what the liberals are fighting for, it will be no contest.
Add a Comment
§The Mobization at the Port of Oakland needs to be in the AM NOT PM
by Union Activist
Sunday Oct 30th, 2011 10:54 AM
The mobilzation (Community Picket ) needs to be in the Morning not the evening . There have been several successful community pickets over the years that ILWU #10 and ILWU#34 have honored . Starting with an Anti-Apartheid action in the 1980's. They have ALL been in the early morning . For obvious reasons . The Morning shift is bigger , often considerably bigger . And what better way to start off the Morning news with a report that the Port of Oakland isn't working ! Of course if the picket is succesfull we can also mobilize for the evening .
But the Morning is key .
Add a Comment
§God, what a day! I've been clubbing strikers for eight hours!
by True then, true now
Monday Oct 31st, 2011 11:05 PM 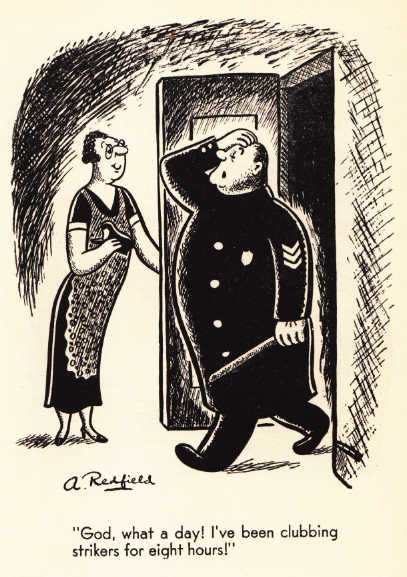 God, what a day! I've been clubbing strikers for eight hours!
Add a Comment
§Freedom or Socialism
by Ryan
Wednesday Nov 2nd, 2011 2:55 PM
Let me first say that I am a strong opponent of fascism, whether it comes dressed as a communist, socialist, or capitalist. My politics predominantly lie in that ephemeral zone between anarchism and libertarianism.

That said, it is not necessary for me to declare that I side with OWS or with the Tea Party. This would be a grave mistake. The Establishment wins when we are divided and we lose. We cannot let this momentum be split up by a OWS vs TP argument. What we need now and forever is solidarity with everyone who is in the 99% and dedicated to making the lives of all Americans more free and equal from the day they are born.

Ryan
Add a Comment
Support Independent Media
We are 100% volunteer and depend on your participation to sustain our efforts!