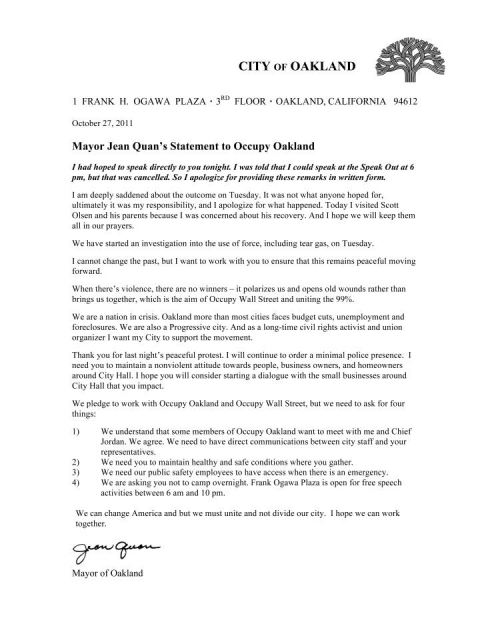 I had hoped to speak directly to you tonight. I was told that I could speak at the Speak Out at 6
pm, but that was cancelled. So I apologize for providing these remarks in written form.

I am deeply saddened about the outcome on Tuesday. It was not what anyone hoped for,
ultimately it was my responsibility, and I apologize for what happened. Today I visited Scott
Olsen and his parents because I was concerned about his recovery. And I hope we will keep them
all in our prayers.

We have started an investigation into the use of force, including tear gas, on Tuesday.

I cannot change the past, but I want to work with you to ensure that this remains peaceful moving
forward.

When there’s violence, there are no winners – it polarizes us and opens old wounds rather than
brings us together, which is the aim of Occupy Wall Street and uniting the 99%.

We are a nation in crisis. Oakland more than most cities faces budget cuts, unemployment and
foreclosures. We are also a Progressive city. And as a long-time civil rights activist and union
organizer I want my City to support the movement.

Thank you for last night’s peaceful protest. I will continue to order a minimal police presence. I
need you to maintain a nonviolent attitude towards people, business owners, and homeowners
around City Hall. I hope you will consider starting a dialogue with the small businesses around
City Hall that you impact.

We pledge to work with Occupy Oakland and Occupy Wall Street, but we need to ask for four
things:

1) We understand that some members of Occupy Oakland want to meet with me and Chief
Jordan. We agree. We need to have direct communications between city staff and your
representatives.
2) We need you to maintain healthy and safe conditions where you gather.
3) We need our public safety employees to have access when there is an emergency.
4) We are asking you not to camp overnight. Frank Ogawa Plaza is open for free speech
activities between 6 am and 10 pm.

We can change America and but we must unite and not divide our city. I hope we can work
together.

Mayor of Oakland
§FAIL!
by (a) Thursday Oct 27th, 2011 11:34 PM
i don't know who she thinks is going to buy this bullshit. The plaza is only closed to free speech after 10pm? What a fucking tool. She's shooting herself in the foot. AGAIN
Add Your Comments

§Quan SHOULD NOT be allowed to speak at Oscar Grant plaza
by Respect yourselves
Friday Oct 28th, 2011 12:43 AM
I find it incredible that some of the Non-leader leaders of Occupy Oakland seem to be willing to consider allowing the official that ordered the Police attack to speak before us . I don't blame Brother Scott Olsen's parents for not telling that sleazy hack what she could do with her ''sympathy ''. After al they are probably overwhelmed with grief and concern for their son .
But it would be sheer madness for us to allow oue ENEMY to use us to try to recoup her ''progressive '' image .
Add a Comment
§Quan "supports the movement"??
by Quan
Friday Oct 28th, 2011 1:10 AM
About halfway through her statement, she writes, "...I want my City to support the movement".

So then, is she going to support the strike -- and especially, will she encourage all banks and corporations to close next Wednesday?

Add a Comment
§yeah right
by hmm
Friday Oct 28th, 2011 3:36 AM
not just a sour mix of co-optation and backpedaling, but done badly and unconvincingly. she signs off on a massive and violent attack on tuesday, and tells on us thursday that she actually supported us all along. lol. the oakland unity she talks about is unity beneath the heel of a riot cop's boot.
Add a Comment
Support Independent Media
We are 100% volunteer and depend on your participation to sustain our efforts!