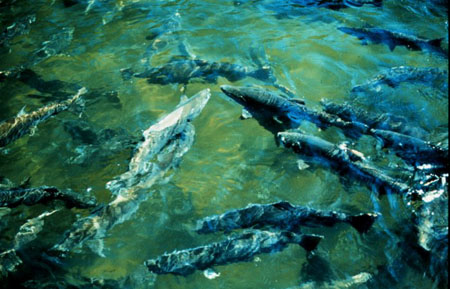 Five Northern California Representatives today demanded answers on the current state of the Bay Delta Conservation Plan (BDCP) process - and called on the Interior Department to rescind a “flawed” Memorandum of Agreement (MOA) that they say "was developed behind closed doors."

The Members of Congress accused the memorandum of giving water export agencies south of the Delta and in Southern California "unprecedented influence" over an important public process concerning California’s fresh water supplies.

The Representatives echoed the concerns of Delta residents, family farmers, fishing groups, Indian Tribes and environmentalists, who oppose the state-federal plan to build the peripheral canal to export more water from the Sacramento-San Joaquin River Delta to corporate agribusiness and southern California. They oppose the canal because of the threat it poses to imperiled Central Valley salmon and Delta fish populations, Delta farms and Delta communities.

In a letter to Interior Secretary Ken Salazar, U.S. Reps. George Miller (CA-7), Mike Thompson (CA-1), Doris Matsui (CA-5), Jerry McNerney (CA-11) and John Garamendi (CA-10) asked that the recent agreement between the Department and water agencies be rescinded and that the process be opened up to include other key stakeholders left out of the discussions, including Bay Area, Delta and coastal communities, farmers, businesses, and fishermen.

“Interior should immediately rescind this flawed MOA and work instead to establish a successful BDCP process that is transparent and based on parity, and that genuinely puts the restoration of the Bay-Delta and its fisheries, the needs of local communities, and the quality of local water resources on par with other water supply goals," they wrote.

The lawmakers recently held a series of meetings with Department and California officials to express their concerns about the MOA that the federal and state governments signed two months ago with water export agencies, an agreement that the Representatives said was developed and signed without any input from Bay-Delta stakeholders. The agreement would clear the way for the agencies to commit an additional $100 million for consulting and planning work on a controversial peripheral canal expected to cost $12 billion.

The Department had previously told the lawmakers to expect an answer to their inquiries early last week, but failed to meet that deadline, according to a joint news release from the Members of Congress. The letter from the lawmakers requests a written response from Secretary Salazar by the beginning of next week.

"The BDCP planning process has failed to treat these affected groups in a fair and transparent manner, and we do not believe that the emerging plan is reflecting Bay-Delta constituencies’ concerns and interests," they stated.

The members also wrote that the process as it currently stands has established an "unrealistic timeline" for the completion of the plan, and that it raises expectations of favorable outcomes for the water agencies that signed it. These concerns share several traits:

"They have the potential to harm the Bay-Delta, fishing communities, local farmers, and our constituents more broadly," they said. "They compromise Interior’s ability to exercise its mandates to restore the Bay-Delta ecosystem and California’s fisheries, and to consider the interests of all stakeholder groups. And they were developed in closed-door negotiations with the water export contractors that excluded all other interests.”

The representatives also noted, "It does not appear that the federal government is taking seriously the goal of restoring endangered salmon or that it intends to operate the Central Valley Project to meet the statutory mandate to protect, restore, and enhance fish, wildlife, and associated habitats."

Adam Fetcher, Press Secretary for the U.S. Department of the Interior, said Interior has received the letter and will respond directly to the Representatives.

"Secretary Salazar has been clear that California’s complex water problems require science-based solutions developed as part of a close partnership between the federal and state government, as well as all key stakeholders," said Fetcher. "Transparency and accessibility for all parties in this process is a key part of our efforts to move forward with the BDCP as quickly as possible in order to address the all-important goals of a healthy Bay Delta ecosystem and a reliable water supply for California.”

Delta advocates fear that the construction of the canal and export of more water from the Delta will result in the extinction of Central Valley steelhead, Sacramento River chinook salmon, Delta smelt, longfin smelt, Sacramento splittail, green sturgeon and other imperiled fish species. In spite of widespread opposition to the canal, the Brown and Obama administrations are fast-tracking the BDCP process.

"We are very pleased that the Congressional Representatives from the greater Delta are calling for reform of the BDCP," said Barbara Barrigan-Parrilla, Executive Director of Restore the Delta. "The BDCP will not succeed without Delta communities, Delta landowners and fishing communities being at the table."

The Bay Delta Conservation Plan will not only impact fisheries in the Central Valley and Delta, but the fish, communities and Indian Tribes of the Trinity and Klamath rivers. "The Trinity River is a Delta Tributary Watershed and is affected by the Bay-Delta Conservation Plan," noted Tom Stokely of the California Water Impact Network.

The Representatives' letter was sent less than a month after two infamous records were set on the Sacramento-San Joaquin River Delta as the water year ended on September 30.

First, 9 million Sacramento splittail were "salvaged" at the state and federal Delta pumps near Tracy in 2011. The previous record salvage number for the splittail, a native minnow found only in the Sacramento-San Joaquin River system, was 5.5 million in 2006 (http://blogs.alternet.org/danbacher/2011/09/09/over-11-million-fish-salvaged-in-delta-death-pumps-since-january-1).

Second, the water projects pumped a record 6.5 million acre-feet of water from the Delta in 2011, according to government data compiled by Spreck Rosecrans at Environmental Defense. The previous record was 6.3 million acre-feet in 2005.

The full text of the letter is below.

We are writing to follow up our recent meetings with Interior officials and other participants in the Bay Delta Conservation Plan (BDCP) and to express our strong objections to the current direction of that plan.

The constituents we represent have a great deal at stake in the future of the BDCP process and ultimate plan. Delta, Bay Area and coastal communities, residents of the floodplain, farmers, businesses, fishermen, and the rest of our constituents could be profoundly affected by the BDCP. But to date, the BDCP planning process has failed to treat these affected groups in a fair and transparent manner, and we do not believe that the emerging plan is reflecting Bay-Delta constituencies’ concerns and interests.

Specifically, it does not appear that the federal government is taking seriously the goal of restoring endangered salmon or that it intends to operate the Central Valley Project to meet the statutory mandate to protect, restore, and enhance fish, wildlife, and associated habitats. Furthermore, we cannot accept proposals – including ones under consideration by the BDCP – that would harm Delta communities and the regional economy by eroding water quality for drinking and agriculture.

This is a critical moment, and we urge you to take concrete corrective actions now so that the BDCP process can succeed. Your Department recently signed a Memorandum of Agreement (MOA) with certain state and federal water export agencies that excluded other stakeholders. That agreement offers the signatories unprecedented influence over the process, and it raises expectations of favorable outcomes. While we appreciate your outreach to the Delta counties and to the environmental NGOs since the signing of the agreement, the existence of this unfair agreement continues to taint the process and must be withdrawn. At a minimum, we believe that Interior should retract its approval of the MOA and allow for a public comment period of 45 days.

The MOA creates a number of serious problems. For example, this agreement binds BDCP participants to an unrealistic timeline that has the serious potential to rush the many important decisions that have thus far been put off, avoid a full consideration of alternatives, and undermine the much-needed scientific analyses that remain to be done – analyses that many of the agreement’s signatories have resisted.

In addition, the MOA describes long-term guarantees of certainty to federal water contractors as “an essential element of a successful BDCP.” This is an unreasonable standard to establish, especially as no equivalent assertions have been offered to any other BDCP participants. We are additionally concerned that establishing certainty for the contractors as an “essential element” of the BDCP is in conflict with the many other federal responsibilities in play in the BDCP, such as doubling the populations of salmon and other anadromous fish as required by law, providing necessary water for wildlife refuges, preserving water quality and availability for Delta agriculture, and meeting the needs of other water users.

The above concerns — along with the many others we have raised in our recent meetings — share several worrying traits. These are positions sought by the same handful of state and federal water contractors that have long dominated the BDCP process. They have the potential to harm the Bay-Delta, fishing communities, local farmers, and our constituents more broadly. They compromise Interior’s ability to exercise its mandates to restore the Bay-Delta ecosystem and California’s fisheries, and to consider the interests of all stakeholder groups. And they were developed in closed-door negotiations with the water export contractors that excluded all other interests.

Because we have not yet received a response to our request, we reiterate it here: Interior should immediately rescind this flawed MOA and work instead to establish a successful BDCP process that is transparent and based on parity, and that genuinely puts the restoration of the Bay-Delta and its fisheries, the needs of local communities, and the quality of local water resources on par with other water supply goals. That includes:

· Establishing a realistic timeline that allows sufficient time to address the serious unanswered questions remaining before the BDCP, conduct the appropriate scientific reviews including of all alternatives, and comply with NEPA and other relevant statutes.

· Genuinely committing to the co-equal goals: any “certainty” under consideration for the water export contractors must be matched by equal, specific, and certain commitments to restoring the Bay-Delta to health as required by state and federal law.

· Maintaining state and federal agencies’ ability to implement other statutory mandates including, but not limited to, the CVPIA’s anadromous fish restoration program (including B2 water, the Restoration Fund, and other activities), the refuge water supply program, Trinity River restoration, and the requirement that beneficiaries must pay for the mitigation of any project.

· Ensuring that any final BDCP preserves water quality and water availability for farmers, families, and businesses in the Bay-Delta area, and preserves flood protection for communities in the region.

We are disappointed that we find ourselves in the present situation, and that the interests of our constituents are still facing these hurdles at this stage of the BDCP process. The public interest and the stewardship of the Department require that transparency and equal participation must be reestablished for all stakeholders in the BDCP as soon as possible. To that end, we reiterate our request for corrective action as to this MOA, and as you consider the Department’s next steps regarding the BDCP, we seek your commitment that you provide us with advance notice when making determinations that would affect our constituents.

For all of the reasons detailed above, we request a written response to this request by October 31.