Add an Event
Newswire
Calendar
Features
Home
Donate
From the Open-Publishing Calendar
From the Open-Publishing Newswire
Indybay Feature
Publish to Newswire
Add an Event
Related Categories: South Bay | Global Justice & Anti-Capitalism
Outrage at Arrests of Occupiers in San Jose
by Lailo (green-evolution [at] hotmail.com)
Saturday Oct 22nd, 2011 1:21 AM
The Occupy San Jose encampment was dismantled and its occupants arrested early Friday morning, causing a strong reaction from demonstrators who gathered in front of City Hall to express their outrage. 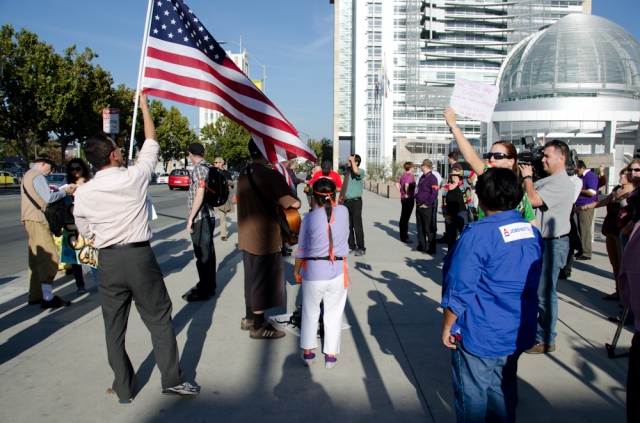 original image (1000x662)
Two paddy wagons accompanied by at least five cop cars arrived at the foot of City Hall in downtown San Jose, California around 3:00 a.m. to take down the tents and arrest the 11 activists who had helped to hold camp there for almost four weeks.

“They didn’t read us our rights, they just took us,” Chris Candia, a San Jose State University student and occupier who was arrested and out on bail said. “I’m no quitter,” he added, “My family is all from Chile. I want to stand up for my own rights.”

Bail had been set for $500. Those arrested included eight men and three women.

A crowd of over 100 gathered in reaction to the arrests at City Hall Plaza around 4:00 p.m. and marched down the street to the local Bank of America, chanting slogans such as, “They got bailed out, we got sold out,” and “Change you bank,”as people withdrew money from the ATM machines.

The City claims that the occupiers had broken the City Ordinance, which states, “No person shall camp on the city hall plaza … or remain on the plaza after closing time … unless authorized to do so by the director.”

Others say that the occupiers have the Constitutional right of assembly, and therefore their arrests were unwarranted. 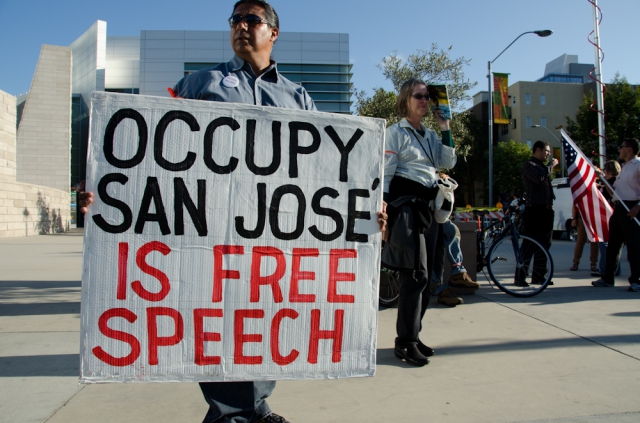 original image (1000x662)
Photo by Cassie Kifer
http://www.occupysj.org
Add Your Comments
LATEST COMMENTS ABOUT THIS ARTICLE
Listed below are the latest comments about this post.
These comments are submitted anonymously by website visitors.