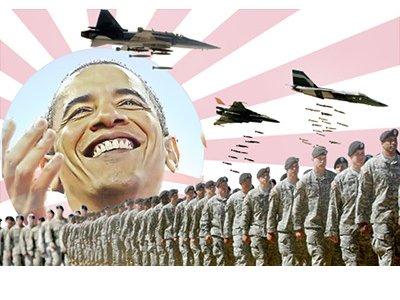 3rd and Harrison Streets
across from "W" Hotel
San Francisco

Bring the Noise… Resist the Crimes of Your Government!

We in The World Can't Wait express our enthusiastic
solidarity with the morally and physically courageous
youth of Occupy SF and all others forming occupations
in the Bay Area and beyond. They have not resigned
themselves to accepting the way the world is, but are
boldly exposing the towering crimes and audacious lies
of this nation’s financial and political elites.

Their actions are an extremely welcome development
and a gust of fresh air in the suffocating and poisonous
atmosphere that the major parties, the Tea Partiers, and
their billionaire sponsors have been propagating and
imposing, in this, the "land of the free."

On Tuesday, October 25, World Can’t Wait invites all
people of conscience to rally at 3rd and Howard Streets
in San Francisco, 11:00 am, to protest all the crimes of a
system that relies on war, torture, unmanned drone
attacks, secret operations and police brutality to
maintain Empire in the interest of America’s richest 1%.

We call on all people to stand with these path-blazing
youth and those oppressed by our government, here and
around the world. Put your energies, your funds, your
thoughts, and your bodies on the line to give voice to
the most exploited, ignored, and oppressed who have
suffered under the U.S. government's economic,
military, and social crimes here and around the globe.

The future is unwritten… which one we get us up to us.

The latest horror in the White House, millionaire Democrat Obama, who, like the Republicans, is and always has been bought and paid for by the top 1%, his fellow millionaires, is attending a $7500 a plate private dinner to be attended by 200 donors. The only viable parties who by definition represent the poorer 99% in California are Peace & Freedom Party at:
http://www.peaceandfreedom.org/home/
and the Green Party at
http://www.cagreens.org/
Let us recall the record of this latest fascist in the White House. First read The Obama Craze, published Feb 29, 2008, long before the election at
http://www.counterpunch.org/2008/02/29/the-obama-craze/
Obama always was pro-nuclear, pro-private profit health insurance companies, anti-gay marriage, pro-NAFTA and pro-Zionist Israel, among many other reactionary positions. Today we know him also as being a proud supporter of targeted assassinations, pro-British Petroleum, pro-destruction of Social Security with his cutting of the Social Security payroll tax, pro-tar sands oil drilling, for bloody CIA assassinations around the world as occurred in Libya to steal Libya's oil, water and gold, pro-keeping Guantanamo open and promoting secret and not secret torture camps around the world, promoting the largest deportation rate ever, including illegally rounding up American citizens, pro torture and rape at the military checkpoints at the airports, promoting privatized schools which is destruction of the public school system, promoting military recruiting in the schools, pro-low wages for auto workers, cutting auto workers' wages in half, pro-bailing out the banks to the tune of $1 trillion but not the workingclass and all the other heinous crimes people associated with the Republicans. Obama also supported continuing the illegal prosecution and false imprisonment of attorney Lynne Stewart, the continued illegal imprisonment of Leonard Peltier and refuses to file civil rights charges to free Mumia Abu-Jamal. This is called fascism. And on abortion, 87% of US counties have no abortion clinic, about which Obama has done nothing to improve.
The date announcement is from
http://www.globalexchange.org/events/rally-tell-president-obama-stop-keystone-xl-pipeline
http://ecologycenter.org/calendar/event.php?title=Rally+in+SF%3A+Tell+Obama+to+Stop+the+Keystone+XL+Pipeline&eventID=37008
http://www.globalexchange.org/events/rally...
Add Your Comments
LATEST COMMENTS ABOUT THIS ARTICLE
Listed below are the latest comments about this post.
These comments are submitted anonymously by website visitors.