Add an Event
Newswire
Calendar
Features
Home
Donate
From the Open-Publishing Calendar
From the Open-Publishing Newswire
Indybay Feature
Publish to Newswire
Add an Event
Related Categories: Santa Cruz Indymedia | Global Justice & Anti-Capitalism
Occupy Santa Cruz - Global Day of Action
by Alex Darocy (alex [at] alexdarocy.com)
Sunday Oct 16th, 2011 3:33 PM
Community members gathered Saturday afternoon to join Occupy Santa Cruz in support of the Global Day of Action, which featured planned events by Occupy movements around the world on October 15, 2011. A local sleep-in was planned, and various activities were held at the county courthouse, including a 2:30pm march through the downtown which again headed to the major banks, Chase, Wells Fargo, and Bank of America. The march was estimated to have several hundred participants. 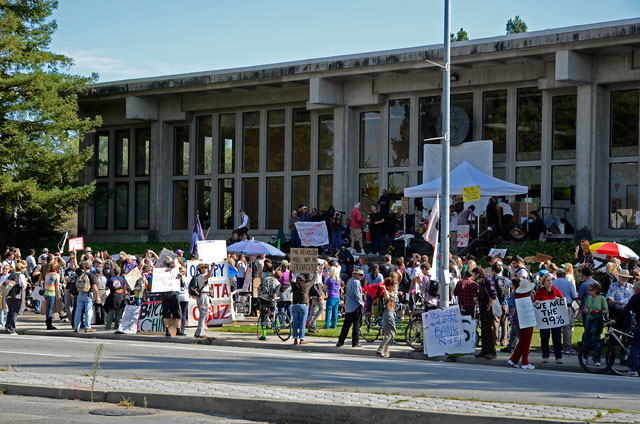 As marchers neared the courthouse on their return from visiting the banks and Pacific Avenue, approximately a dozen people sat down on the Water Street Bridge and began a short occupation of the roadway, which forced a closure by police that extended past what would have been the 'normal' march time. The larger group was generally of the opinion that no civil disobedience should occur that day, since the events at the courthouse were officially permitted, and the occupation of the bridge shortly ended. Once near the courthouse, protesters began a meditation sit-in in the middle of Water Street. Again the larger group disapproved, and they managed to get everyone but one meditator up off of the road. When community members involved with Occupy Santa Cruz spoke with him, he communicated that that he would get up if the SCPD asked him to. A member of Occupy Santa Cruz's legal working group then conveyed that message to the police, and officers approached the meditator and politely asked if he would stop blocking the road. He agreed immediately and exited the roadway without incident.

The courthouse rally continued through the afternoon with musical performances, but by the evening, a planned group sleep-in on the courthouse steps never really manifested. 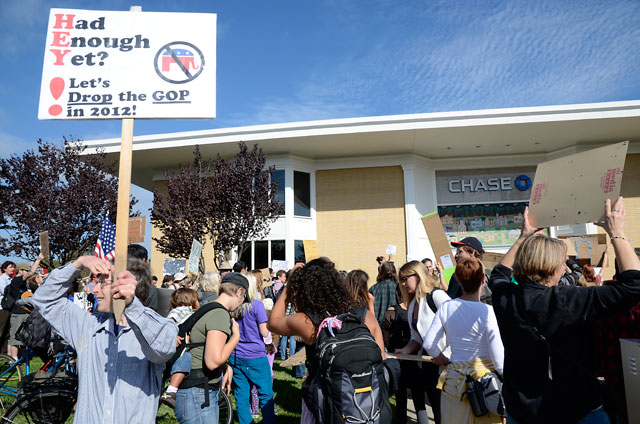 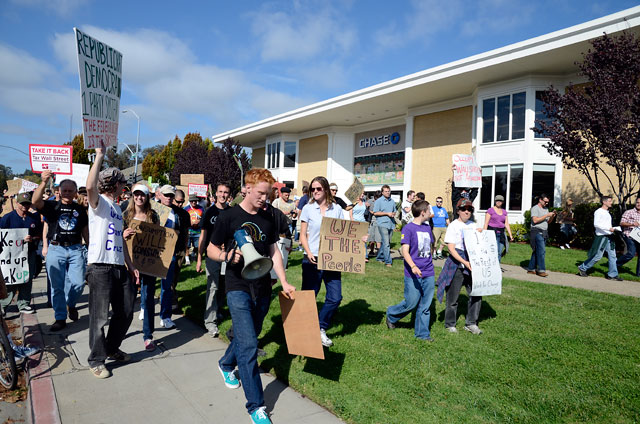 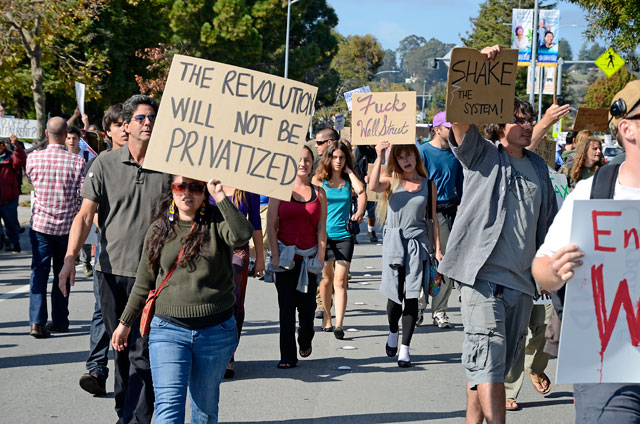 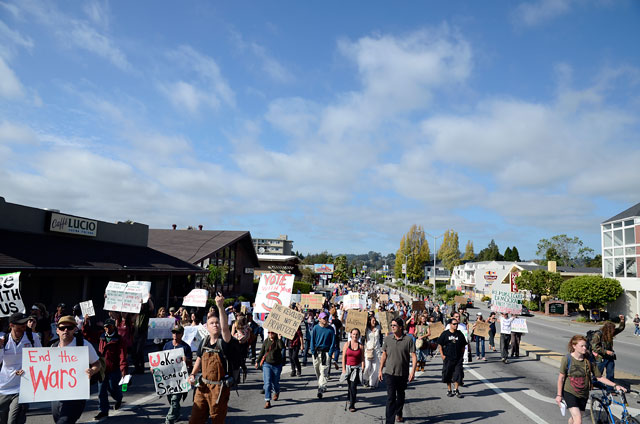 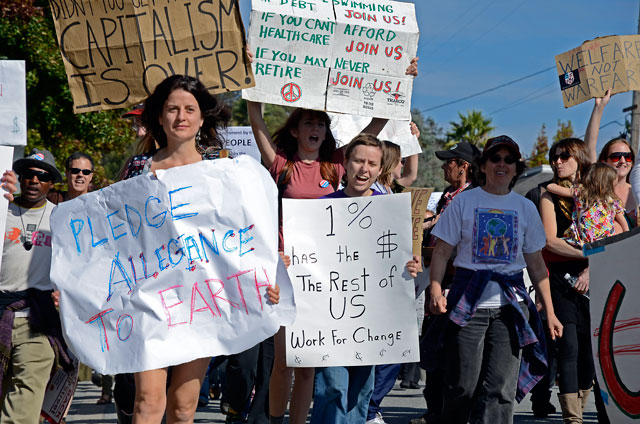 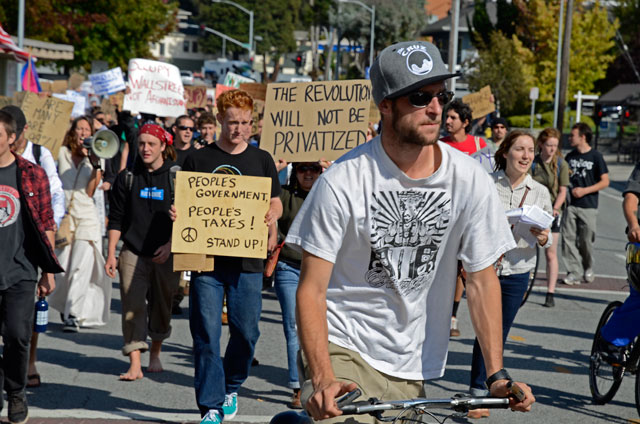 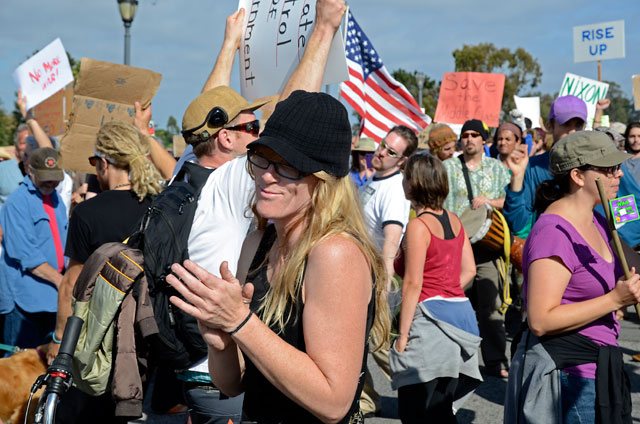 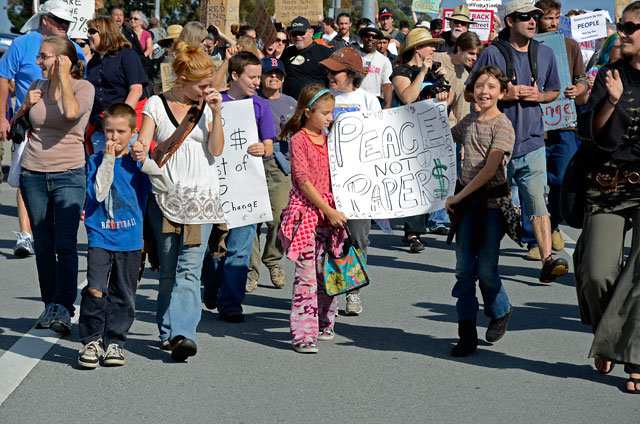 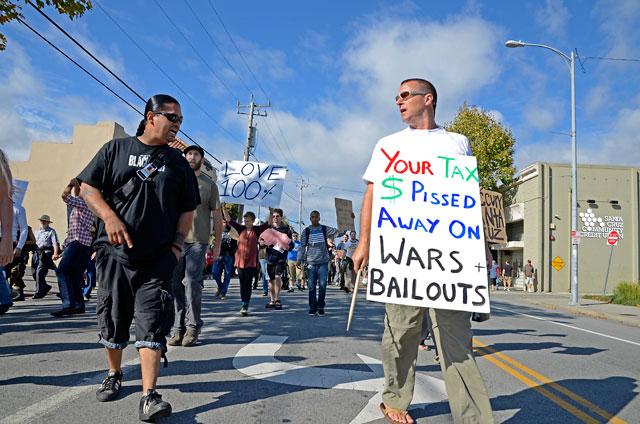 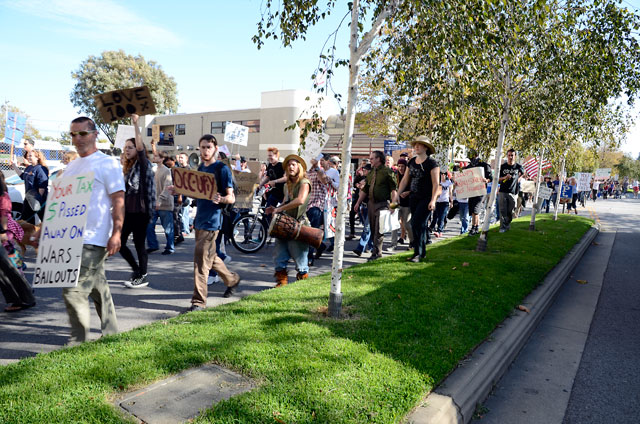 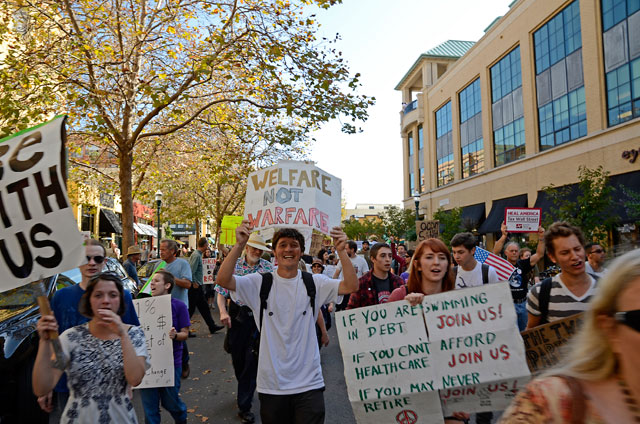 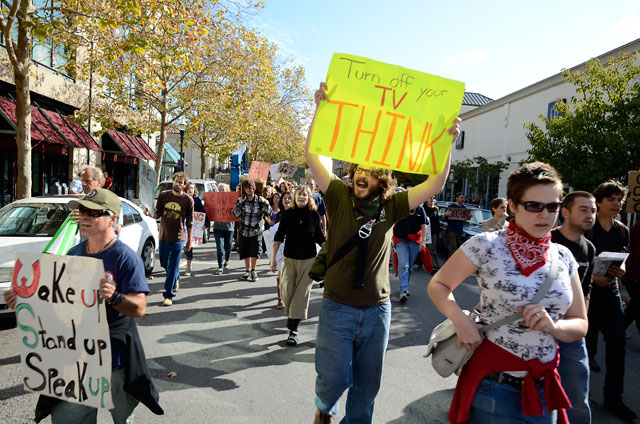 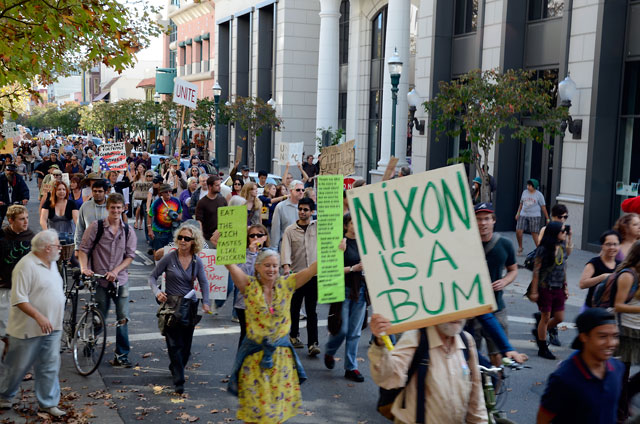 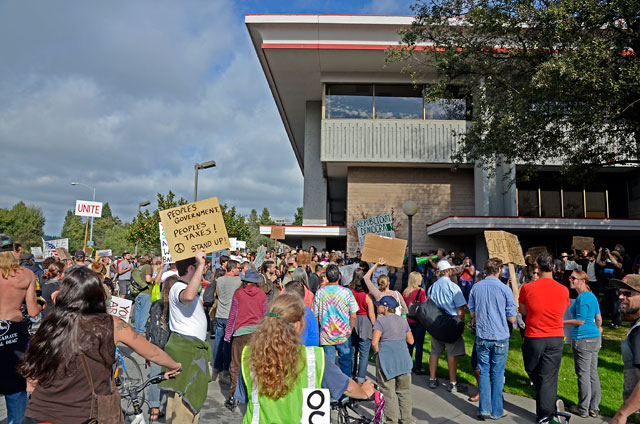 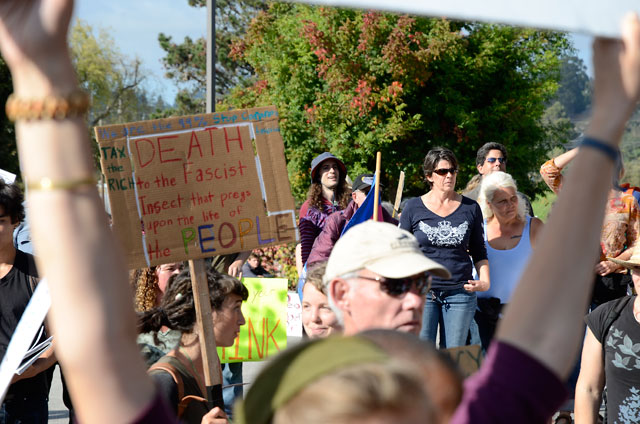 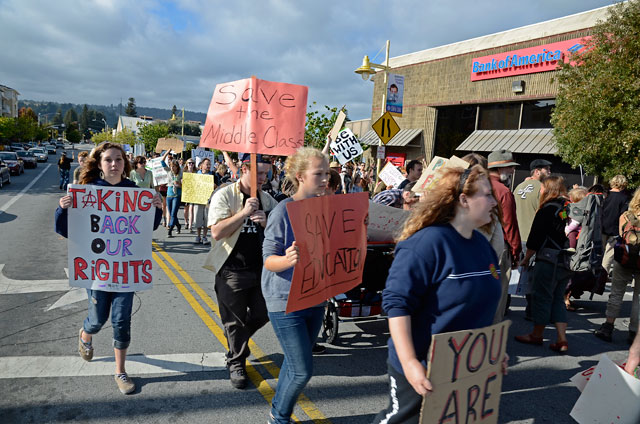 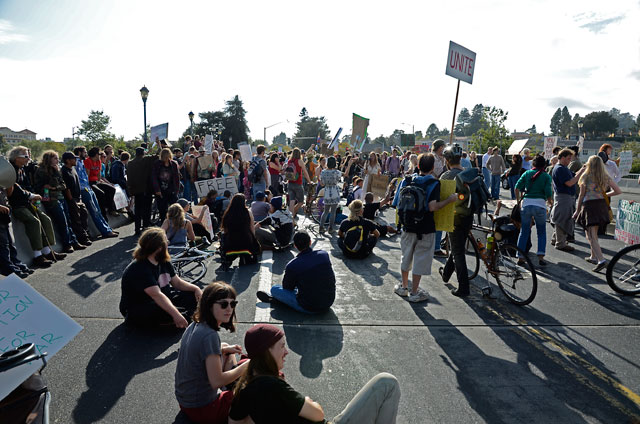 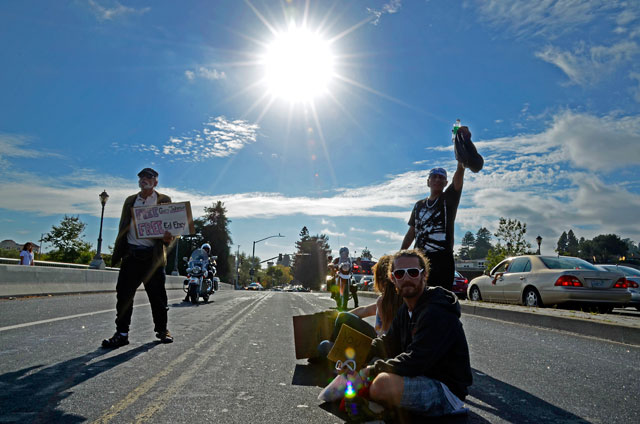 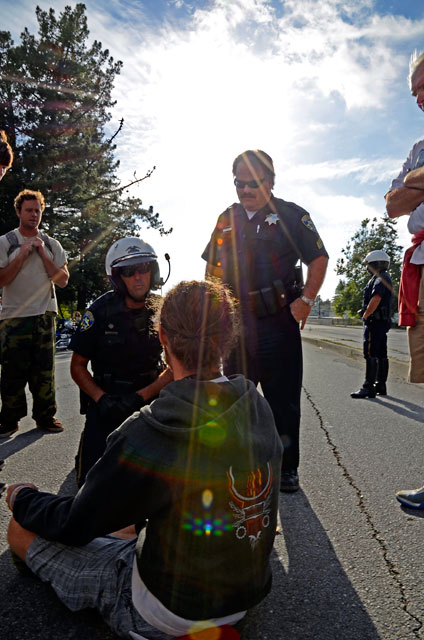 In front of the Santa Cruz County courthouse on Water Street.
Add Your Comments
LATEST COMMENTS ABOUT THIS ARTICLE
Listed below are the latest comments about this post.
These comments are submitted anonymously by website visitors.