by Dallas B
Occupy Fresno began with 4 days of one hour rallies. Tonight the occupation of courthouse park began. 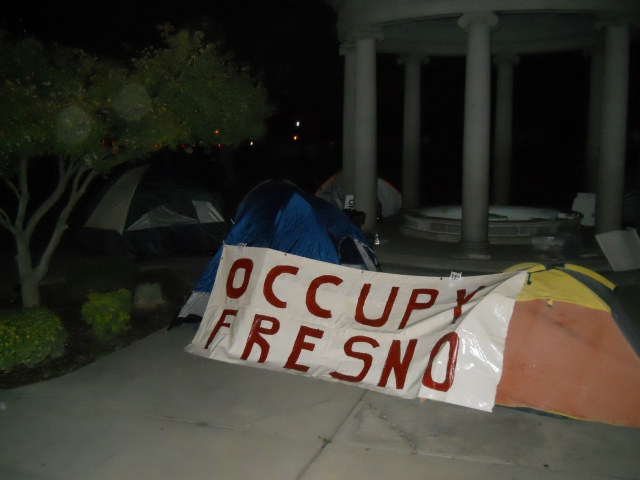 original image (4000x3000)
On Thursday Oct. 6th occupy Fresno began with four days of one hour vigils to build momentem for the actual occupation. On sunday Oct. 9th the occupation of courhouse park began at 5 pm. Wbeen talking about logisticse have an ongoing general assembly taking place at this time. We've been talking about logistics and setting up tents. So far there is no police presence. We do have a number of lawyers supporting us if the police do show up.
We started with 55 people at the general assembly and hope to grow from there.
First sign of police just showed up. He is currently calling in some backup.
Related Categories: Central Valley | Global Justice & Anti-Capitalism
§occupy Fresno update
by Dallas B
A Fresno County Security Gaurd came in all macho and said the Fresno Occupy site had to pack up and leave within 5 minutes. We asked to speak with an actual cop. about 10 minutes later 2 sherrifs showed up. After speaking with them for a few minutes and showing them that we are not trashing the area and that we are a part of the occupy movement the sherrifs said that we could stay.
Add Your Comments
Comments (Hide Comments)
§Day 3 has begun!
by occupier
Last night the security and sheriffs actually let us sleep! it was great. About 20 people slept in the park last night with over 60 showing up to the GA. Things are getting organized and it's turning into a really amazing thing. Come by and check it out if you're in the area. Been getting lots of donations but more are always needed, food is the main thing.
Add a Comment
Support Independent Media
We are 100% volunteer and depend on your participation to sustain our efforts!