Add an Event
Newswire
Calendar
Features
Home
Donate
From the Open-Publishing Calendar
From the Open-Publishing Newswire
Indybay Feature
Publish to Newswire
Add an Event
Related Categories: Palestine | East Bay | Arts + Action
MECA Opens "A Child's View From Gaza" Exhibit on Schedule at New Venue in Oakland, 9/24/11: photos & video
by dave id
Wednesday Sep 28th, 2011 2:22 AM
The Middle East Children’s Alliance (MECA) and supporters protested the decision by the Museum of Children's Art (MOCHA) to cancel the exhibit "A Child's View From Gaza" under pressure from Zionist organizations. MOCHA held firm that they would not allow the exhibit. MECA announced that the exhibit would open on the originally scheduled date anyway, outside rather than inside of MOCHA. What MECA kept under wraps until opening day was that they had secured an alternate venue for the exhibit just around the corner from MOCHA. As the exhibit was set to open on September 24th, MECA and supporters first gathered in the courtyard outside of the MOCHA building, displaying reproductions of the Gazan children's artwork. Less than half an hour later, an announcement was made about the new venue and the Brass Liberation Orchestra led supporters out of the courtyard, down the sidewalk, and around the corner to the new home for the exhibit. Hundreds of people attended the opening over the course of the next few hours. In front of the new venue, speakers addressing the censorship included Ziad Abbas and Barbara Lubin of MECA. [Video below] The exhibit is set to show in Oakland through November 30th. 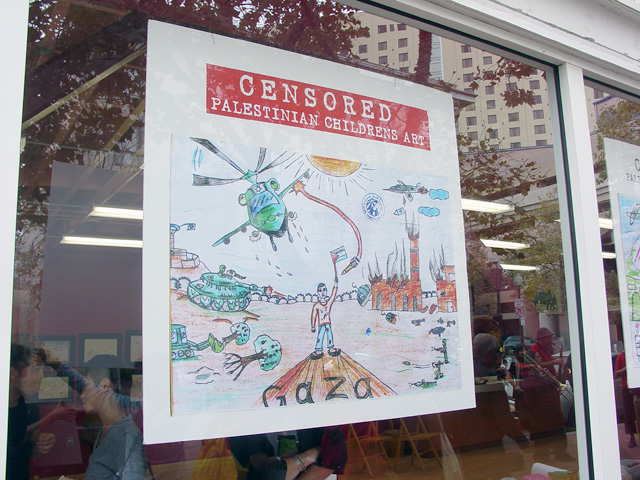 [Pictured above: MECA's new home for "A Child's View From Gaza" exhibit at 917 Washington Street in Oakland]

As promised, the Middle East Children’s Alliance (MECA) presented “A Child’s View From Gaza” on the scheduled opening date, September 24, 2011. The art exhibit opened in the courtyard outside of the Museum of Children’s Art (MOCHA) in Oakland to a tremendous crowd of supporters. More than 500 men, women, and children of all ages and backgrounds came to celebrate the artistic expression of Palestinian children in Gaza. WATCH VIDEO

All of us at MECA would like to extend our deepest thanks to the many friends and people of conscience who took a stand against the pro-Israel groups that use their enormous financial resources to silence Palestinian voices. Since MOCHA succumbed to the pressure of these organizations and announced its cancellation of the art exhibit, MECA has received an outpouring of support from around the world. Hundreds of letters were sent; petitions were signed; and protesters gathered outside of MOCHA all with a clear message: the censorship of children will NOT be tolerated! We are especially thankful to those of you who have offered to host the exhibit in support of the children artists.

In the courtyard on Saturday, supporters carried enlarged prints of the original drawings stamped with the word “Censored”. Shortly after, MECA announced that due to the overwhelming support from the community, a venue for the art had been secured. The crowd then marched toward a retail space where MECA unveiled the full, uncensored art exhibit that the Museum Board of Directors cancelled just two weeks prior to the opening.

The new space is located just around the corner from MOCHA at 917 Washington Street and had been leased by MECA just one day earlier.

Hours after MECA’s Executive Director Barbara Lubin signed the lease to the new venue and the last drawing was hung up on the wall, MOCHA Board Member Randolph Belle called Friday afternoon requesting to meet with MECA about hosting a “modified version” of the exhibit. This was less than 24 hours before the scheduled opening and while community members were gathering outside of MOCHA to protest its censorship of Palestinian children’s art.

We at MECA made a commitment to the children of Gaza to share their experiences and perspectives, and consider any modifications to the art exhibit as a form of censorship. Children everywhere deserve to be heard, but we have an even greater responsibility to listen to the stories of children under siege and who survived Israel’s brutal military assault in 2008-2009. Much of the artwork featured in the exhibit originated from MECA’s psychosocial program called “Let the Children Play and Heal,” which uses the arts to help children cope with trauma.

MECA remains committed to the children artists and asks for your continued support of this important program. We will continue to display the artwork over the next two months, and will soon post the exhibit hours on our website. We invite teachers and educators to organize student trips to the art exhibit. For more information on hours, field trips, or how you can volunteer, please call us at (510) 548-0542 or email at meca [at] mecaforpeace.org.

Thank you,
All of us at MECA

http://www.indybay.org/palestine
§Brass Liberation Orchestra leads the parade away from MOCHA to new venue for exhibit
by dave id Wednesday Sep 28th, 2011 2:22 AM 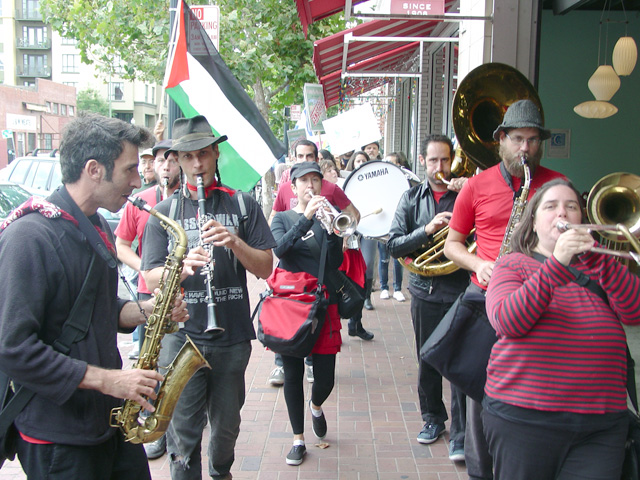 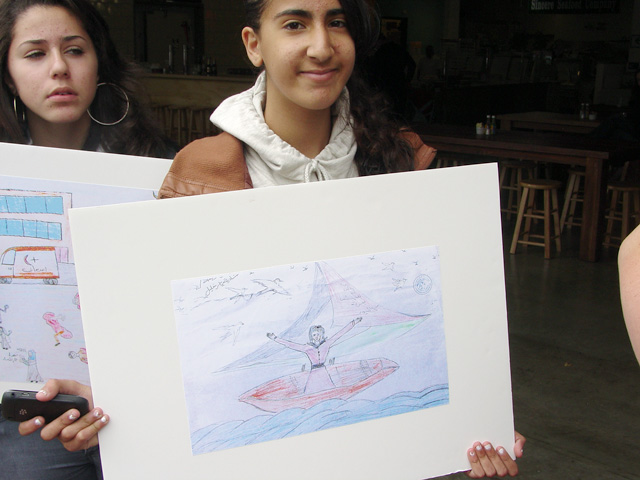 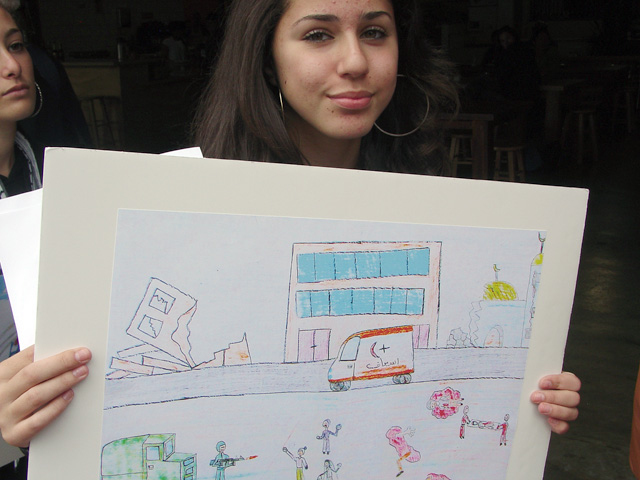 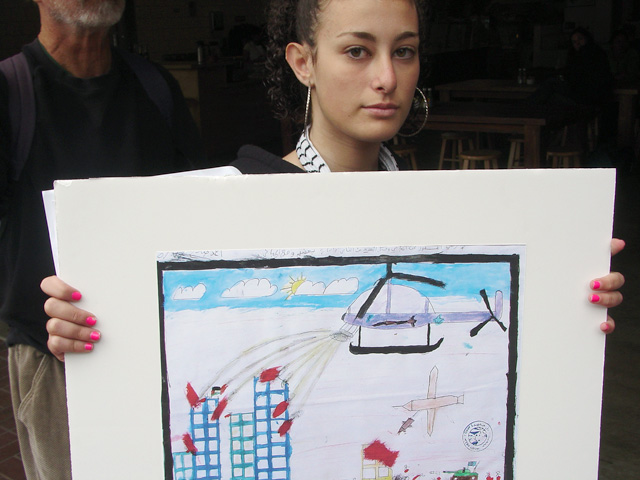 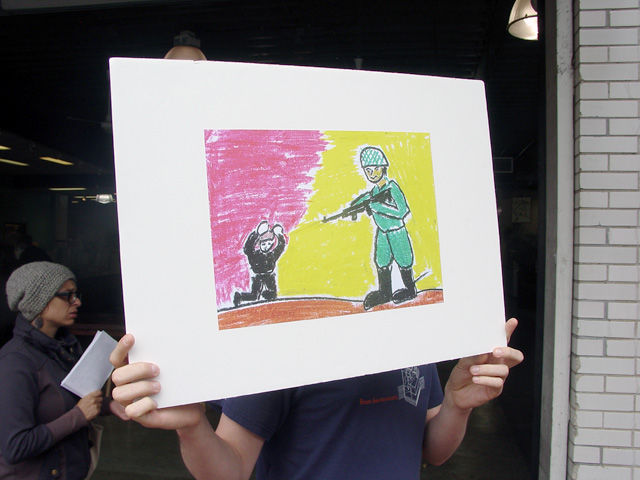 http://www.indybay.org/palestine
§Children's artwork - fire and destruction from the air
by dave id Wednesday Sep 28th, 2011 2:22 AM 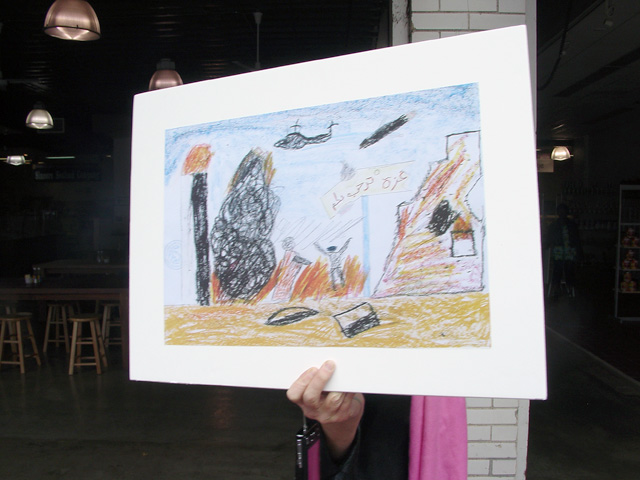 http://www.indybay.org/palestine
§Children's artwork - hiding in a corner from soldier
by dave id Wednesday Sep 28th, 2011 2:22 AM 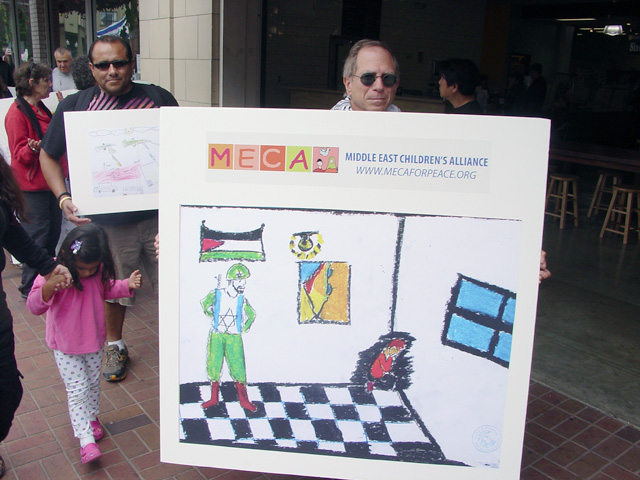 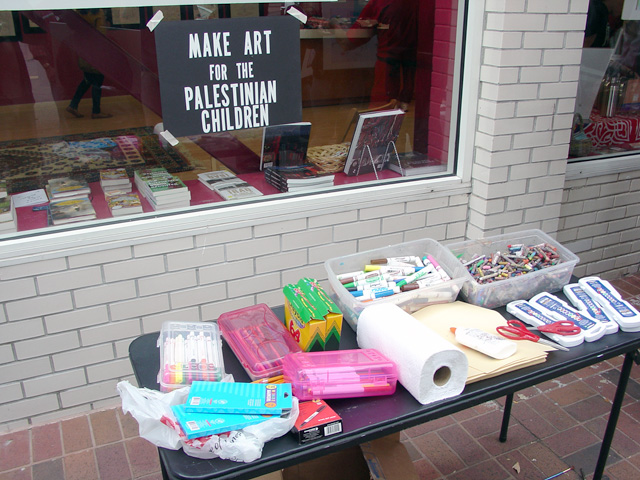 http://www.indybay.org/palestine
§Inside new venue at 917 Washington Street in Oakland
by dave id Wednesday Sep 28th, 2011 2:22 AM 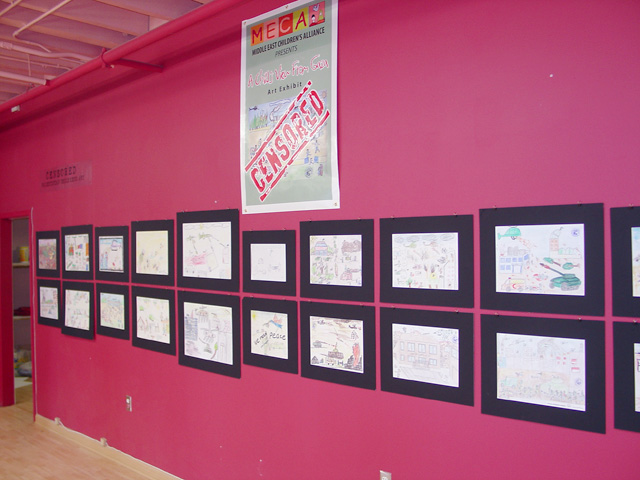 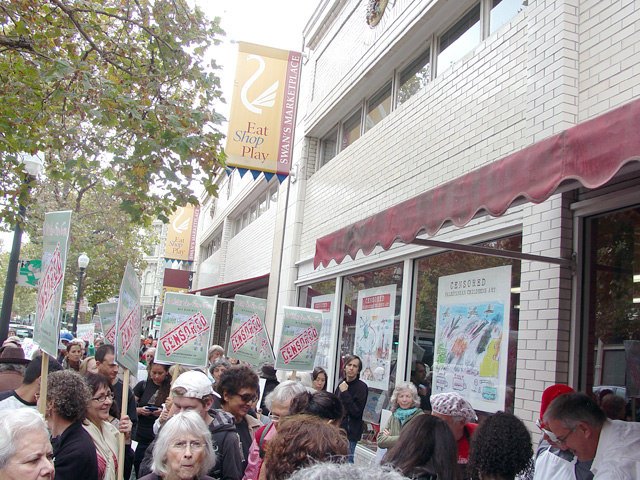 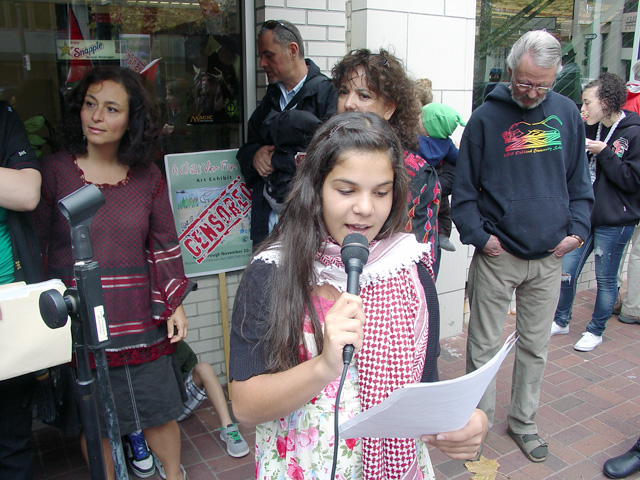 http://www.indybay.org/palestine
§Omar speaks to the importance of allowing children to tell their stories
by dave id Wednesday Sep 28th, 2011 2:22 AM 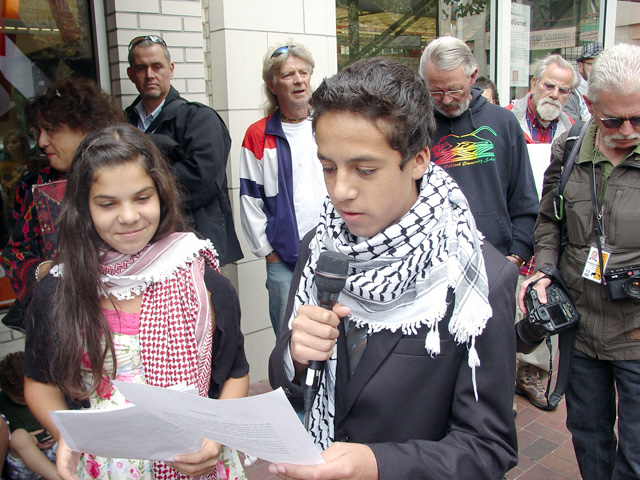 http://www.indybay.org/palestine
§Ziad Abbas thanks supporters of the exhibit and says that those who tried to silence the art failed
by dave id Wednesday Sep 28th, 2011 2:22 AM 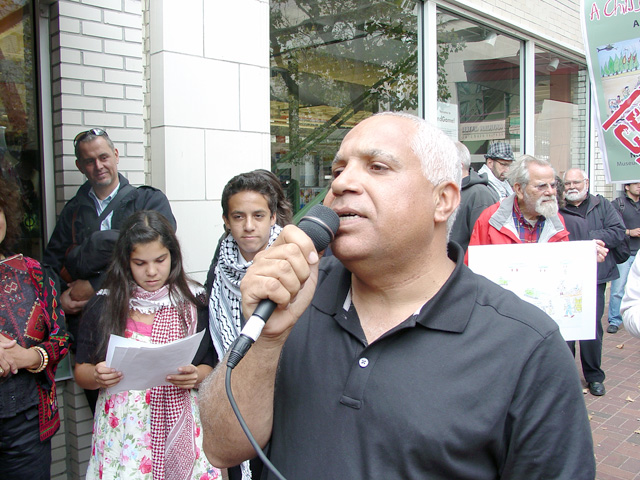 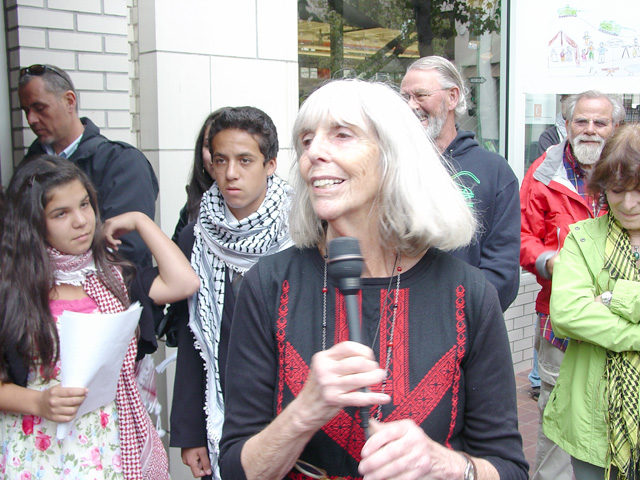 http://www.indybay.org/palestine
§Hundreds flowed through the room to see the children's art
by dave id Wednesday Sep 28th, 2011 2:22 AM 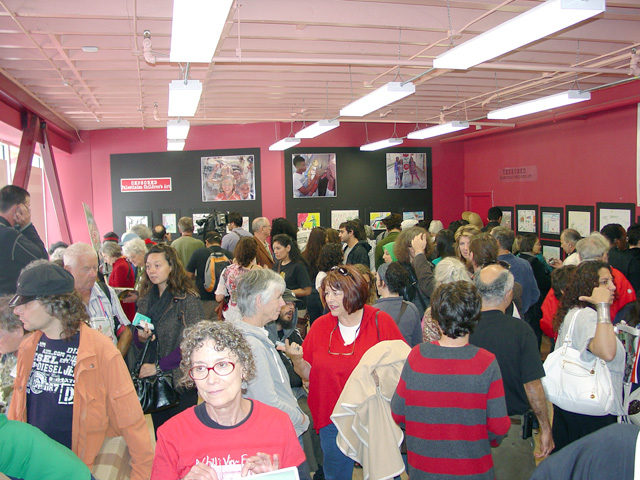 http://www.indybay.org/palestine
§Zionists with their flags left behind at MOCHA after the art show moved around the corner
by dave id Wednesday Sep 28th, 2011 2:22 AM 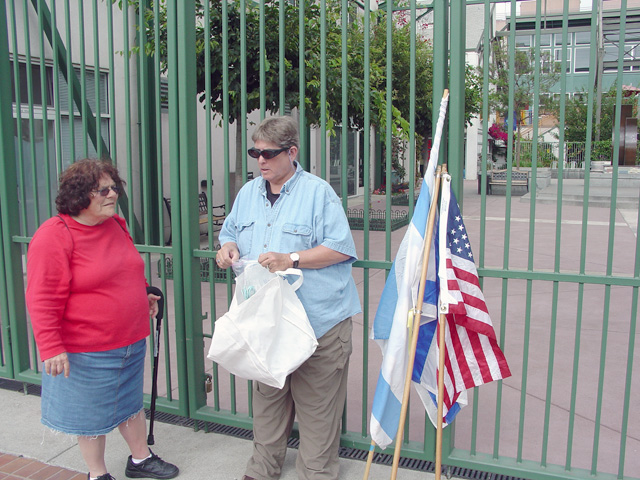 http://www.indybay.org/palestine
Add Your Comments
LATEST COMMENTS ABOUT THIS ARTICLE
Listed below are the latest comments about this post.
These comments are submitted anonymously by website visitors.