by Black Bear Chronicles
The Berkeley College Republicans are under fire for their Facebook plans to hold a bake sale mocking people of color and women. The BCR claims the "pricing structure" of the bake sale - charging whites $2, Asians $1.75, Latinos $1, Blacks $0.75, Indigenous $0.25, and discount for women - was satire of current state legislation relating to Affirmative Action. 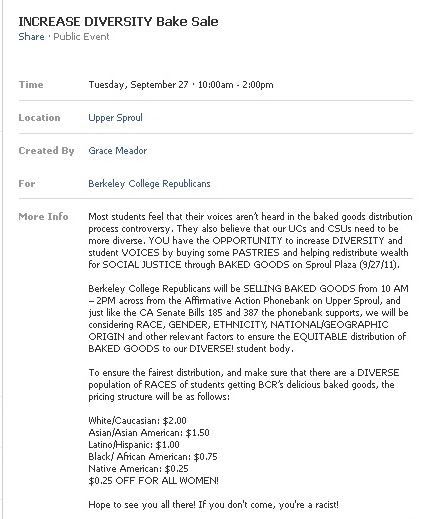 The original Facebook event compares higher education to baked goods and says that the pricing structure would "ensure the fairest distribution, and make sure that there are a DIVERSE population of RACES of students getting BCR's delicious baked goods."

"If you don't come," the event invitation said, "you're a racist!"

Organizers claim the concept is "satire" and the event is in opposition to planned phone banking in favor of Senate Bills 185 and 387. SB 185 would allow public universities and colleges to consider race in their outreach and retention programs, according the the bill's author Ed Hernandez (D-West Covina). But critics, like the website Stormfront, have deemed the bill as "anti-white."

After hundreds of comments and heavy criticism, organizers of the "bake sale" deleted the original description.

"Gov. Jerry Brown has SB 185 on his desk which would authorize California public universities to consider race, gender, ethnicity, and national/geographic origin in the admissions process. The Berkeley College Republicans firmly believe measuring any admit's merit based on race is intrinsically racist," the Facebook invite now reads. "Our bake sale will be at the same time and location of a phone bank which will be making calls to urge Gov. Brown to sign the bill. The purpose of the event is to offer another view to this policy of considering race in university admissions. The pricing structure of the baked goods is meant to be satirical, while urging students to think more critically about the implications of this policy."

Shawn Lewis, president of the UC Berkeley College Republicans organization, insists the change was not to cover up his organization's racially charged invite, but to clarify the satirical intent. "The reason the description was changed was to clarify the message of the event. Obviously the satirical nature of the event was not recieved [sic], so we felt it necessary to instead just put exactly what the point was."

The event is already sparking comparisons to the controversial "Compton Cookout" held at UC San Diego in February 2010. That event mocking Black History Month was also organized on Facebook. In March 2010, Black UC Berkeley students held the "Black Out 2010," a demonstration blocking Sather Gate (the third since 2001).

In 1996, California voters passed Proposition 209. The controversial ballot initiative altered the California constitution and eliminated the use of affirmative action in the state, including in higher education. Since then, the number of African American, and Latino students in the UC system has dwindled. As of Fall 2010, UC Berkeley has a Black undergraduate student population of 3.4 percent, according to the most recently published statistical data. California has a Black population of over six percent.

Caliber Magazine has reported that "ASUC Senator Justin Sayarath stated his disapproval with the event and deemed it offensive in nature. 'It trivializes and mocks the struggles that students in our very own Cal community face every single day,' Sayarath says. ASUC senators plan to meet later today to discuss this issue.

"Many critics, including ASUC senate members, claim the event’s nature is harmful for campus climate. However, Lewis believes there is a meaningful purpose to the event. 'The event is meant to arouse emotions and encourage students to think more critically about the deeper consequences of considering race in the admissions process,' Lewis says."


The following is from a Facebook invitation from the Berkeley College Republicans.

Most students feel that their voices aren't heard in the baked goods distribution process controversy. They also believe that our UC's and CSU's need to be more diverse. YOU have the OPPORTUNITY to increase DIVERSITY and student VOICES by buying some PASTRIES and helping redistribute wealthe for SOCIAL JUSTICE through BAKED GOODS on Sproul Plaza (9/27/11).

Berkeley College Republicans will be SELLING BAKED GOODS from 10 Am - 2PM across from the Affirmative Action Phonebank on Upper Sproul, and just like the CA Senate Bills 185 and 387 the phonebank supports, we will be considering RACE, GENDER, ETHNICITY, NATIONAL/GEOGRAPHIC ORIGIN and other relevant factors to ensure the EQUITABLE distribution of BAKED GOODS to our DIVERSE! student body.

To ensure the fairest distribution, and make sure that there are a DIVERSE population of RACCES of students getting BCR's delicioius baked goods, the pricing structure will be as follows:

Hope to see you all there! If you don't come, you're a racist! 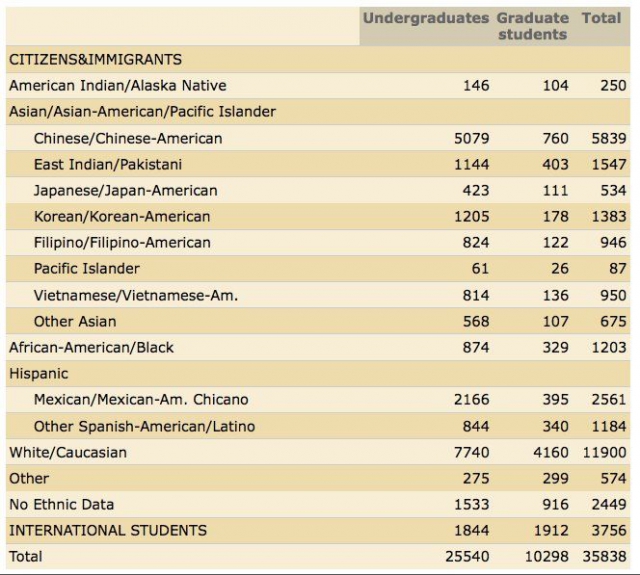 original image (664x597)
2010 Student Demographics at UC Berkeley
END_OF_DOCUMENT_TOKEN_TO_BE_REPLACED
Add Your Comments
Latest Comments
Listed below are the latest comments about this post.
These comments are submitted anonymously by website visitors.
TITLE
AUTHOR
DATE
You don't have to be "white" to be a White Supremacist.
Aaron Aarons
Reactionaries come in all colors
Marc
what AA
Hanne
A Bake Sale: And the Indian Woman Eats for Free!
Elizabeth Edwards
Just More of the Same BS from the Party of No
Sandie M
Apple Never Falls Far From Tree; And Who Has the Money to Go to UC
Tax the Rich
The baked good will not be any good.
freedom fighter
Support Independent Media
We are 100% volunteer and depend on your participation to sustain our efforts!