Her pro bono attorney, Jonathon Gettleman, filed a comprehensive writ of habeas corpus, claiming that 647(e) is vague and overbroad, and that Lemaster's freedom of speech was truncated when County Sheriff Deputies used the antique "lodging" law to break up an otherwise legal protest.

In court, Judge John Gallagher, Dept 2, ordered DA Dabkowski to answer Gettleman's "well-written, voluminous" brief by October 14th, with Gettleman's response to hers due by October 21st. A hearing on the 'writ' is set for October 28th. If a trial is to result, the date will be set then. The hearing is to take a closer look at the Lodging law as applied during PeaceCamp2010.

In related news, Ed Frey and Gary Johnson, convicted of PC 647(e) in May 2011, have received the court-approved complete transcript of their trial in order to file their appeals. Frey and Johnson still face the remainder of their 6 month sentences should their appeals fail.

Linda Lemaster herself on Linda's Hearth at http://www.hearthbylinda.blogspot.com/ notes: I was very impressed by the "Writ of habeas Corpus", eighty pages my attorney brought together to bring the First Amendment back into these trials and hearings. As a long time advocate for homeless families and individuals, I felt a kind of validation when I saw the Jones and Eichorn cases, and the ghost of Mitch Snyner in gettleman's citing the Community for Creative Nonviolence's supreme court's decision, in this Writ.

I hope to be able to focus for a bit now, health permitting, on a fundraising dinner. To raise money for legal costs, but this event also hopes to function as a thank-you for both attorneys involved so far with this lodging law stuff.

I'm forming a "dinner committee" (and it 'may' not be a consensual one?). If any of you would like to be contacted or included in planning and carrying out such an event, e me back with your phone number or preferred contact info (I have neither a meeting directory nor a computer in my home at present).

If you have not read "my" article in Street Spirit's September issue, here's the URL to their dynamic website: thestreetspirit.org. Putting "my" in quote marks because it was largely and sensitively edited (two stories into one!) by Street Spirit's editor Terry Messman, who deserves equal credit on the writing in this instance.

More recent stories about PeaceCamp 2010, the struggle against the City's anti-homeless Sleeping Ban, and those being prosecuted for Sleepcrime can be found at "D.A. Bob Lee Tries Linda Lemaster for Sleep Ban Protest" at http://www.indybay.org/newsitems/2011/09/13/18690213.php Follow the links there.
Add Your Comments 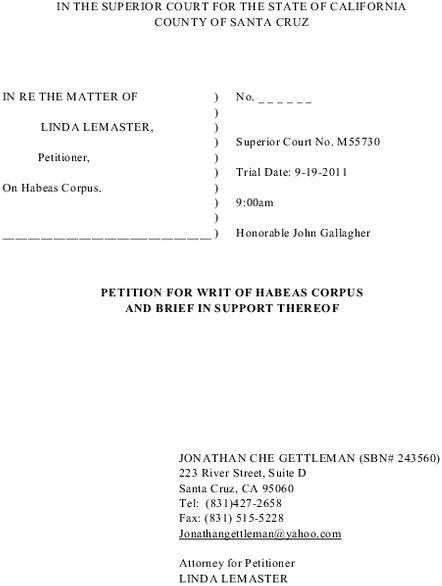 Petitioner, Linda Lemaster, by and through her attorney, Jonathan Che Gettleman, respectfully petitions this court for a writ of habeas corpus, and by this verified petition sets forth the following facts and causes for the issuance of said writ:

I. Petitioner is presently unlawfully restrained on pretrial release...
Add a Comment
§So far so good!
by Auntie Imperial
Wednesday Sep 21st, 2011 8:46 PM
This should have been done much sooner but I'm glad it's getting done. PeaceCamp2010 was a PROTEST. not an attempt to camp simply for sleep sake, or the people assembled could have slept soundly someplace not subject to constant surveillance/harassment/arrest by the authorities.

Add a Comment
§Huh??
by Lawrence Liu
Sunday Sep 25th, 2011 3:21 PM
"PeaceCamp2010 was a PROTEST. not an attempt to camp simply for sleep sake, or the people assembled could have slept soundly someplace not subject to constant surveillance/harassment/arrest by the authorities."

I don't follow your logic, Auntie. The PROTEST was about the proposition that the people assembled were unable to sleep soundly someplace free of "constant surveillance/harassment/arrest by the authorities."

I, like you, am vehicularly housed. Do you know some place to go that I don't?


Add a Comment
§Curbhugger Chris's Arrest
by Robert Norse
Sunday Sep 25th, 2011 8:09 PM
The action was originally proposed by Ed Frey and supported by HUFF as a protest against the Court's delay in dealing with the appeal of Robert "Blindbear" Facer, convicted of sleeping on the beach at a time when there was no legal shelter for him. Frey provided a portapotty and washing facility--that was the only nighttime restroom facility downtown available and slept there repeatedly. Homeless activists led by Curbhugger Chris Doyon took up the vigil as a 24-hour protest in the days that followed. In the course of that protest, the vigil served as a de facto zone where homeless people came to seek security, restroom facilities, food, and community.

And, as Auntie Imperial accurately puts it, to protest the laws criminalizing homeless people in this city and county (and state).

His recent arrest for allegedly hacking the County website gets the usual Sentinel smear-and-sneer greatment at http://www.santacruzsentinel.com/ci_18959821?IADID . Many of the comments that follow reflect on that site reflect the usual anti-homeless misunderstanding and bigotry.

Chris's case comes up on Thursday in Federal Court in San Jose before Magistrate Boyd 1:30 PM. The court is located at 280 S.. 1st St. His attorney is Jay Leiderman who can be reached at jay [at] leidermandevine.com .

"The peaceful and persistent three-month protest last yea of PeaceCamp2010 led for a month and a half by Chris Doyon highlighted the abusive and hypocritical treatment of homeless people in Santa Cruz under its absurd, costly, and unconstitutional Sleeping Ban (MC 6.36.010a).

D.A. Bob Lee's subsequent prosecutions of peaceful sleepers under the even more draconian and rarely used state anti-lodging law (PC 647e) have cost tens of thousands of dollars and shamed the City.

Activist Linda Lemaster will challenge this law next month in an usual Writ of Habeas Corpus hearing (see http://www.indybay.org/newsitems/2011/09/20/18690858.php).

Doyon's leadership role during part of the protest produced more Sentinel and mainstream media publicity than any homeless protest has ever done. This forced the City to change the wording of the Sleeping Ban--still being used to run homeless people out of town--see http://www.indybay.org/newsitems/2010/09/16/18658837.php .

I salute Doyon for this work and thank him and those who protested with him."

Add a Comment
§Interviews with Curbhugger Chris's Attorney Jay Leiderman
by Robert Norse
Monday Sep 26th, 2011 8:18 AM
http://www.radiolibre.org/brb/brb110922.mp3 (at 1 hour, 32 minutes, 20 seconds in the audio file).
Add a Comment
§Thanks to Chris Doyon and many other people sticking out their necks
by Linda Ellen Lemaster
Monday Sep 26th, 2011 11:05 PM
I, also, want to put out a few words in appreciation of the significant role Christopher Doyon, whom Norse nicknamed "Curbhugger Chris", performed for keeping PeaceCamp2010 going at the County Building for almost a month longer.

Then, when we were busted up, campers moved over to the City Hall campus, where the city and its cops were downright mean. But Doyon was not a part of those final weeks' protesting on Center St; the ball was kept rolling by Gary and Star and a handful of homeless others. Most of the folks disappeared somewhere between the Count Building and City Hall.

Doyon was all along doing amazing outreach and PR work until the County booted us, with the results Norse already mentioned. He also dealt with the "difficult" people very effectively, which improved the amount of time everyone else got to actually SLEEP.

His leadership was very different than Ed's syle, but equally committed. Regardless of what the DOJ is up to, and regardless of whether "crime" is their concern, or whether this is just a further tactic to keep Americans filled with fear, I don't believe that the people who were actually IN the camp demonstration were in any way disappointed by Doyon's stint as "leader". Tho' frankly, beyond the primary purpose we were there to demonstrate, everyone had their own respective beliefs and goals.

I have NO doubt whatsoever that Christopher Doyon was a patriot and a humanist who helped look after everyone's concerns as long as he was able, during PeaceCamp2010 prior to the sheriff's misguided decision to close down the protest. He shared a lot with me on a few evenings, including stories about what living in New England, with REAL town hall meetings, was like, for example.

No two people seem to have the same timeline about ur demonstration, but as far as my own personal memories go, Doyon was willing to take the reins of leadership when Ed Frey announced he needed to get back to his day job. (Tho' Ed continued to aid and support individuals showing up at the camp who had special needs, like medical stuff, even when he was "away" for a while; and he remained responsible for bringing the sanitation station back each nite and aay before 8 am each morn.)

Like Scotts Creek did so long ago, PeraceCamp2010 showed us all that homeless people could respect and help each other and collaborate together, yet remain each her/his own person in terms of "who's in charge." It is dynamic and refreshing when it happens: try it sometime!

I hope the lawyer Chris Doyon has is committed and very good, because it feels more like "McCarthyism" to me, than like any intention of protecting the people. The Feds seem to be ignoring major real criminals, and going after homeless people.

What's up with that? What is the real agenda here? People need to realize that homeless folks are actually people, too. Get over your dated and kneejerk stereotypes, a lot is changing and the former middle class will soon outnumber the impoverished and disabled chronic homeless folks. Will that be a good thing, or a ad thing? I believe humane changes will start to happen, but why wait?
Add a Comment
Support Independent Media
We are 100% volunteer and depend on your participation to sustain our efforts!