Add an Event
Newswire
Calendar
Features
Home
Donate
From the Open-Publishing Calendar
From the Open-Publishing Newswire
Indybay Feature
Publish to Newswire
Add an Event
Related Categories: Palestine | U.S.
Hundreds of Palestinians & human rights activists march to UN calling for full realization
by Palestine UN Solidarity Coalition (media [at] adalahny.org)
Friday Sep 16th, 2011 5:59 AM
On Thursday evening, Palestinians and human rights advocates from around the tri-state area marched through the rain to the United Nations headquarters. With the world’s attention focused on the scheduled vote for Palestinian statehood, demonstrators converged to demand sovereignty, equality for Palestinian citizens of Israel, and the right of Palestinian refugees to return to their homes, in accordance with UNGA Resolution 194.

September 15, 2011, New York - On Thursday evening, Palestinians and human rights advocates from around the tri-state area marched through the rain to the United Nations headquarters. With the world’s attention focused on the scheduled vote for Palestinian statehood, demonstrators converged to demand sovereignty, equality for Palestinian citizens of Israel, and the right of Palestinian refugees to return to their homes, in accordance with UNGA Resolution 194.

The demonstration began with a rally at 4:30pm in Times Square, where approximately 400 Palestinians and their allies braved the poor weather to chant and demand an end to U.S. aid to Israel, an end to Israel's military occupation, and to support the movement for Boycott, Divestment, and Sanctions against Israel. During the hour, Palestinian activists detailed the demands of the community, and musicians led the crowd in Civil Rights’ era- folksongs such as “Keep On Walkin’” and “We Shall Not Be Moved.” The crowd marched down 42nd Street, chanting and singing, and up 3rd Avenue, until they reached Dag Hammarskjold Plaza. There, speakers and performers kept the crowds energy high despite cold, blustery rains.

Riham Barghouti, one of the Palestinian speakers, questioned the United Nations’ failure to uphold Palestinian rights to sovereignty, equality, and return, noting that “all three are rights recognized by UN resolutions and international law.” Palestinian-American poet and author Remi Kanazi addressed the crowd insisting that those behind the UN move were "lacking consensus, legitimacy, and a democratic mandate, something that is not to be overlooked.”

Although it appears that Palestinian leadership will submit to the UN that a state of Palestine be recognized as a member, on land making up 22% of historic Palestine, some analysts have suggested that this initiative, even if successful, will mean little to nothing on the ground in the West Bank (including East Jerusalem) and Gaza, and, furthermore, a number of respected legal experts say it may undermine other inalienable Palestinian rights such as equality within modern-day Israel and the right of return of Palestinian refugees.

“We are calling for an end to all US aid to Israel, which currently amounts to approximately three billion dollars annually, and is used for killing civilians from Lebanon to Gaza, as documented by numerous human rights groups,” said speaker Dima Abi Saab. Dalit Baum, a Jewish-Israeli activist who spoke, added, “Because governments are failing to act, people of conscience around the world should step up and hold corporations and institutions accountable for their continued support of the Israeli government’s criminal policies.”

The rally and march were sponsored by the Palestine U.N. Solidarity Coalition, and was endorsed by more than 53 community and solidarity organizations, including Palestinian, Arab, Muslim, and Jewish organizations. 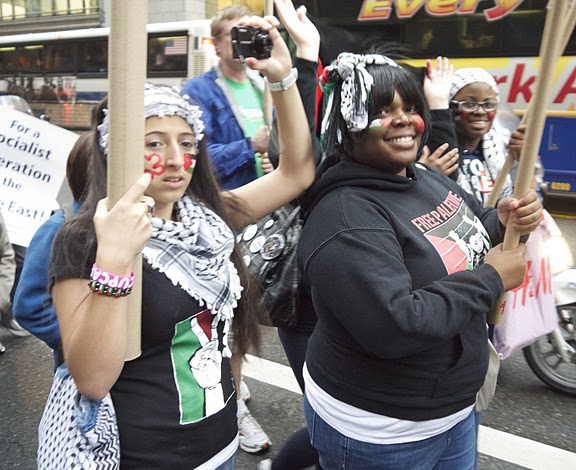 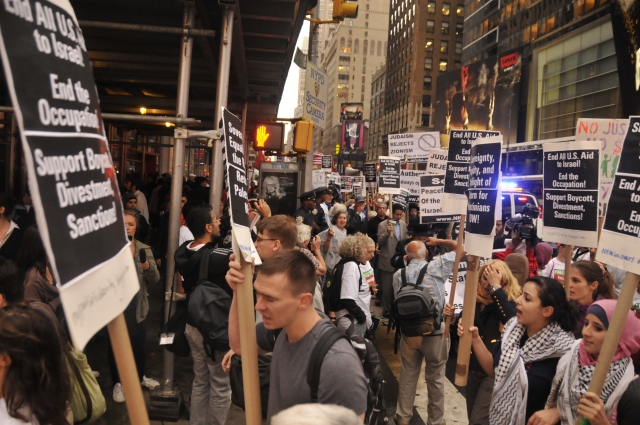 original image (4288x2848)
Photo by Ellen Davidson
Add Your Comments
Support Independent Media
We are 100% volunteer and depend on your participation to sustain our efforts!