by Joshua Hart
An alliance of environmental health groups, disability rights organizations, and elected officials from throughout California will rally on the front steps of the California Public Utilities Commission (CPUC) from 12:30 to 1:15pm on Wednesday to call for a halt to ‘smart’ meter deployment, a free and fair “opt out” plan that is not discriminatory against people suffering from electrosensitivity, and respects legal rights of local jurisdictions that have passed legislative moratoriums banning further wireless smart meter radiation.

original image (858x341)
Inside the CPUC, an all day workshop will be held from 9:30am to 5pm- with Administrative Law Judge Yip-Kikugawa presiding- to discuss options for allowing CA residents to “opt out” of the wireless “smart” meter program. The workshop is the closest thing yet to a statewide public hearing on the ‘smart’ meter program, which was approved without an environmental impact report. There are concerns that the workshop does not provide an opportunity for public comment, or a chance for medical experts (many of whom have written to the CPUC warning of potentially serious health damage from ‘smart’ meters) to speak on the record.

The new meters have been a public relations nightmare for utilities around the country as well as the state commissions that regulate them. The public rebellion has been especially heated in California as residents flood utility call centers with demands to remove the broadcasting meters from their property. Some who have been sickened by the pulses of radiation are increasingly turning to private electricians to remove the wireless meters and replace them with analog meters commonly available from electrical supply shops.

According to CPUC documents obtained through FOIA requests, wireless meters are cited in thousands of reports of adverse health effects. The SmartMeter program has also raised concerns of privacy advocates who believe that the devices' data collection capabilities violate constitutional privacy protections. There have been a growing number of reports linking the meters to instances of fires, explosions, and surges. On August 25th a power surge hit East Palo Alto and disabled hundreds of new smart meters leading to questions by major utility watchdogs about the safety of the ‘smart’ grid being rushed into place without adequate safety precautions or testing. Utilities have rushed to dispose of solid state analog meters that often lasted eighty years or more without incident.

CA Utilities Code 328.2(b) states: “No customer should have to pay separate fees for utilizing services that protect public or customer safety.”

Speakers will be calling for an immediate halt to further deployment, and free, retroactive, individual and community wide analog meter opt outs. Forty-six local governments representing more than 2.5 million people throughout the state have gone on record demanding a halt to ‘smart’ meter deployment. Because the powerful signals from the meters travel up to a mile or more, an individual opt out plan has been ridiculed, as neighbors’ meters expose residents to radiation from all sides anyway.

UC nuclear policy lecturer Dan Hirsch has determined that the wireless meters emit 100-150 times the radiation of a cell phone, invalidating utility claims that the radiation is insignificant.

On May 31st, the World Health Organization declared non-ionizing radiation of the kind emitted by smart meters as a class 2B carcinogen - the same category as DDT, based on cell phone brain tumor studies. Last week, an article in the peer-reviewed Journal of Neuroscience concluded that “EMF hypersensitivity can occur as a bona fide environmentally-inducible neurological syndrome.”


CA Utilities Code 453. (b) states that: No public utility shall prejudice, disadvantage, or require different rates or deposit amounts from a person because of medical condition”

Many of the growing number of Californians who are suffering from electrosensitivity strongly object to any plan that does not include community wide opt outs and affirm the right to retain or have analog meters replaced at no charge. “Charging people with a known disability an extra fee to simply be safe in their homes is equivalent to charging those in wheelchairs to access a ramp. It’s immoral - even illegal under state utilities code. What we need to do is pull the plug on the whole wireless “smart” meter network” and stop hurting people.” said Joshua Hart, director of StopSmartMeters.Org.

PG&E and other utilities have been violating local laws, coming into communities that have refused permission and installing wireless “mesh” networks in their jurisdictions. As a result, there have been skirmishes between installers and residents in areas of Santa Cruz, Marin, Mendocino, San Francisco Counties, and elsewhere around the state. In Santa Cruz, PG&E has had to rely on local police to assist in forcing ‘smart’ meters into declared smart meter free zones, while elsewhere there have been reports of threats, intimidation- even assaults on residents as installers scale 8 foot high walls and fences, trespassing on private property to install the meters.

If a judge ultimately rules in favor of community wide opt out, PG&E will potentially be forced to remove millions of “smart” meters and associated infrastructure it has installed in areas that have objected to their installation or made them illegal, a huge financial blow to the firm’s shareholders as well as a national embarrassment for the utility and telecommunications industries.

A press conference and rally will be held on the steps of the CA Public Utilities Commission- 505 Van Ness Ave, in San Francisco this Wednesday Sept. 14th at 12:30pm Visuals include protesters holding signs and representatives from local governments joining to demand a halt to “smart” meter installations.

The following individuals will be available to speak to the media between 12:30pm and 1:15pm:

Joshua Hart is the Director of StopSmartMeters.Org, an organization working to halt the forced deployment of wireless utility meters. StopSmartMeters.Org has been a grassroots leader in the increasingly contentious fight with the utilities over their health damaging and privacy violating “smart” meter project.

Larry Bragman is currently the Mayor of Fairfax, CA. An attorney, he helped craft the first of more than a dozen anti-smart meter ordinances throughout CA. He will discuss violation of local jurisdictional ordinances, equal protection of utilities and customers, and rights of way issues.

Michael Boyd President of Californians for Renewable Energy, Inc. (CARE) will discuss possible legal action in reference to violations of federal civil rights under color of state law in violation of County Ordinances.

Jim Tobin is an attorney working for a coalition of individuals, organizations, and local governments seeking a free, retroactive, individual and community analog opt out solution as part of the CPUC proceedings as well as compliance by the CPUC with CEQA requirements and utility compliance with applicable local government ordinances. He will be available for questions about the proceeding and what his clients are seeking.

Mary Beth Brangan, James Heddle Co-Direct EON - the Ecological Options Network.
EON is an intervenor in the CPUC's 'opt-out' proceeding. EON's protest filing emphasizes that other components in the 'smart meter' for instance, the switching mode power supply (SMPS), in addition
to the 2 RF (radio frequency antennas,) may also be causing adverse health effects. Therefore, the radio-off or radio-out opt out options are inadequate and irrelevant.

David Wilner of Wilner & Associates filed a protest on April 25, 2011 to PG&E's SmartMeter opt-out proposal because the "radio off" alternative offered by the utility may not solve health problems reported by their clients. They recommend a conventional analog meter option for people that suffer from electrical sensitivity because based on experience, this will address their problems. Our question to the CPUC is: Why can't people in California have an analog meter just like utility customers in Maine?

Steve Martinot lives in Berkeley, He has worked as a machinist and truck driver. He has taught literature and cultural studies at the Univ. of Colorado and San Francisco State Univ. He has published poetry, short stories, and several books of philosophy and political analysis. Steve will talk about the extortionary character of the PG&E proposal, and the fact that it is the people who have been adversely affected by these Smartmeters who are due costs and compensations.


Documents that are part of this proceeding can be viewed at: http://docs.cpuc.ca.gov/published/proceedings/A1106006.htm


CA Local Governments On Board

The following is a list of local governments within California who are opposed to the mandatory wireless ‘smart’ meter program.

Links to meeting minutes, news coverage and other details at: http://stopsmartmeters.org/how-you-can-stop-smart-meters/sample-letter-to-local-government/ca-local-governments-on-board/ 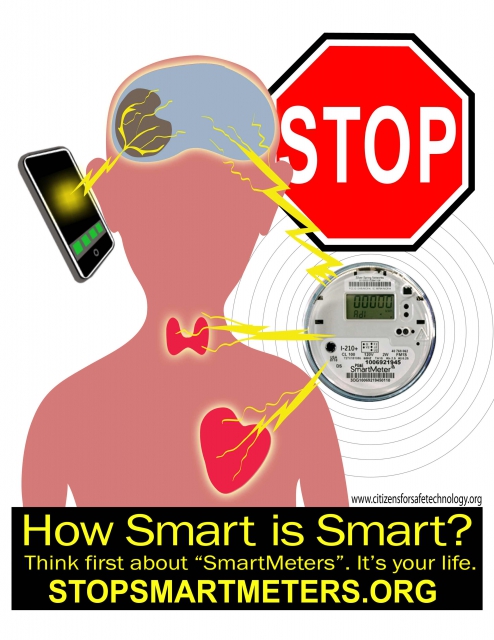 original image (2550x3300)
END_OF_DOCUMENT_TOKEN_TO_BE_REPLACED
Add Your Comments
Latest Comments
Listed below are the latest comments about this post.
These comments are submitted anonymously by website visitors.
TITLE
AUTHOR
DATE
EHSandhateit
Christel Martin
Support Independent Media
We are 100% volunteer and depend on your participation to sustain our efforts!