Vote “No” on Prop. C and Prop. D! Salary Reform Must Come First!

Scapegoating
Public Employees
Public employees didn’t cause the
national economic recession, and
shouldn’t be scapegoated for it,
here or nationally.
But the San Francisco Weekly just
published an article by reporter Joe
Eskenazi on August 31, in which he
claims the defeat of Jeff Adachi’s
pension reform measure “Prop. B”
in November 2010 led to a “direct
result” that Moody’s lowered the
City’s credit rating from Aa1 to
Aa2. Eskenazi blames the credit
rating downgrade only on defeat of
Prop. B, which is patently untrue!
By omission, Eskenazi doesn’t tell
the full story since Moody’s cited
numerous reasons, including in its
report that the credit downgrade:
• “Primarily reflected” the City’s
very narrow financial position.
• Occurred just before the City
sought to peddle $80 million in
new general obligation bonds, on
top of $2.6 billion in outstanding
general obligation.
• Involved “extraordinarily thin”
cash reserves, due in part to the
$1.3 billion in outstanding
principal and interest on another
long-term debt financing scheme
known as “Certificates of
Participation,” which spending
voters have no say over since it
requires just a stroke of the Board
of Supervisors pens to enact.
• Was due in part on the City’s
reliance on one-time solutions,
including draws on reserves to
close structural budget gaps.
• Was due to defeat of revenue
measures in 2010 that might have
helped stabilize the City’s budget
projections, and passage of the
volatile and unpredictable real
estate transfer tax.
Then there’s the $1.47 billion in
skyrocketing salaries noted on the
front of this flier. This represents
$5.4 billion between salaries and
long-term debt that City employees
didn’t create — that neither
Prop. “C” nor Prop. “D” addresses.
The City’s lowest-paid employees
shouldn’t be scapegoated for the
Moody’s credit rating downgrade.

Prop.’s “C” and “D” Punish Those Who Can Least Afford It 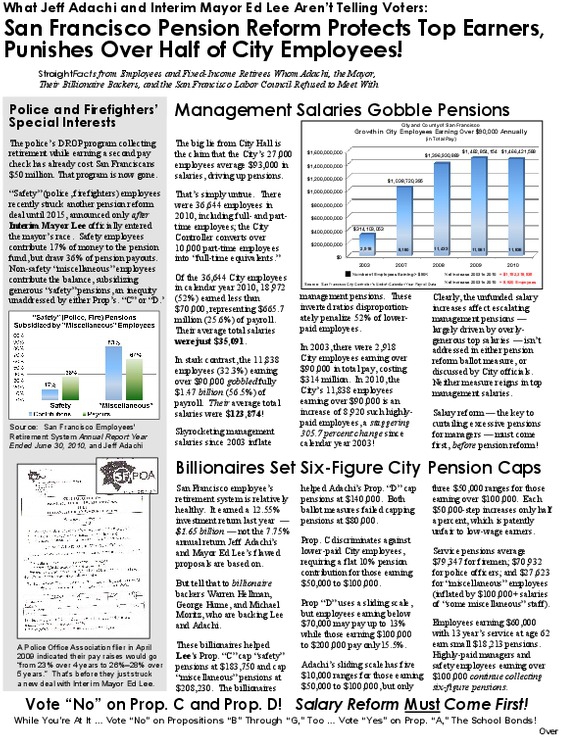 Download PDF (1.2MB)
This document shows the real nature of anti-labor ballot initiative agreed to by the union officials in secret and with the exclusion of all retirees.
Add Your Comments
Support Independent Media